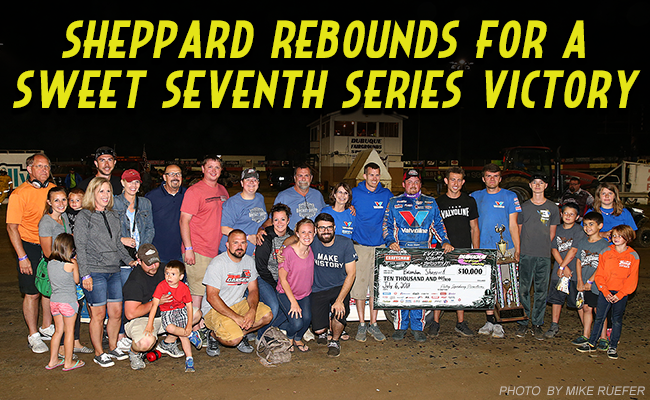 The New Berlin, IL driver, who is familiar with elbows-up style racing, used every ounce of energy he had to put the Rocket1 Racing machine back in Victory Lane for back-to-back World of Outlaws triumphs.

In addition to the team’s impressive comeback from the tail of the field, this win hit a little closer to home for the Crew Chief of the Rocket1 Racing team Danny White, literally. Growing up in Dubuque, IA the 3/8-mile dirt track nestled in the Dubuque County Fairgrounds was familiar territory for White who considers the Dubuque Speedway his home track. Sheppard, White and the whole Rocket1 Racing team were accompanied by White’s family and friends in Victory Lane.

“Thanks for all of the fans for coming out and hopefully this was a good deal for everybody,” said White. “The track wasn’t exact but it was still a good race. It’s just awesome to come home. I have some family and friends everywhere. This one is probably really close to the top of the list of special wins with this team.”

With his seventh win of the season, Sheppard closed the gap on the Series standings just a little more. Entering into Friday’s event Sheppard was 60 points behind point leader Madden. Now he positions himself just 46 points from the lead.

“The points, I’m not even thinking about it right now,” explained Sheppard. “We’re just trying to win these races. It’s a lot of fun out there whenever you don’t have to worry about it. It’s always in the back of your head but at the end of the day to win the points you have to beat them guys so if we keep winning races we keep beating them.”

Although Sheppard is steadily inching ahead in the standings, he remains a solid third for now.

On the other hand, the top two drivers, Chris Madden and Mike Marlar, were separated by a slim four points (respectively) prior to Friday’s action at Dubuque Speedway and it was quite an eventful turn of events during the shootout.

It all started during qualifying when Madden hit the wall resulting in extensive right side damage to the Barry Wright Race Cars No.44. With a little extra help from Shane Clanton and the No.25 crew, Madden’s ride was back in pristine condition for its heat race. Unfortunately, the team’s hard work did not last long after being involved in a tangle in turn-one on the very first lap. Madden’s car was lifted back to the pit area with the assistance of two tow trucks and just like that it was back to work for Madden and his team.

With a fair share of bad luck for Madden, Marlar seemed to have the Series point lead all but locked away. The No. 157 Delk Equipment entry piloted by the Winfield, TN driver won his heat race and drew the pole position for the feature. Continuing on a wave of good luck, Marlar led a majority of the $10,000-to-win event. Yet, on lap 35 of the 40-lap event his luck ran out as he suffered from a right-rear flat tire forcing him to surrender the lead.

With the dramatic turn of events for both drivers, the positions in the point standings remain the same. Charging to a seventh-place finish after starting 23rd, Madden extended his lead over the 13th place finisher Marlar from four points to now 16 points.

Chris Simpson saw his 2018 season luck uptick during the World of Outlaws event at Dubuque Speedway. Simpson commandeered the lead from Marlar on lap 35 ahead of Sheppard and Jimmy Mars. His reign as race leader was short lived. Sheppard bypassed Simpson on the inside as the pair drag raced down the front stretch passing under the flag stand separated by just 0.060-seconds.

“It just got a little slicker and the ruts just got a little bigger,” said Simpson. “All-in-all I’ll take it. I saw that I had a right-rear flat so I felt like that was messing us up at the end of the race. It is what it is but to run second to these guys, you know these guys do it for a living and we work Monday through Thursday. We’ve been struggling the last couple of weeks and we tested last night so to come here and run good, it makes us feel good… Congratulations to BShepp and the Rocket team. They are a top-class team so to run second to them, is pretty cool.”

Mars rounded out the podium at Dubuque Speedway after starting eighth in the feature.

“We were just getting what we could get tonight,” said Mars. “We didn’t qualify very good. We probably could have pushed it a little harder but I was kind of bicycling it there so I just kind of took what I could get. Congratulations to Chris [Simpson] and Brandon [Sheppard]. Brandon had a little bit of bad luck there at the beginning. He’s one heck of a wheelman so congratulations to the whole team.”

The World of Outlaws Craftsman® Late Model Series returns to action on Saturday, July 7 for the Gopher 50 at Deer Creek Speedway for the second night of the Midwest swing.