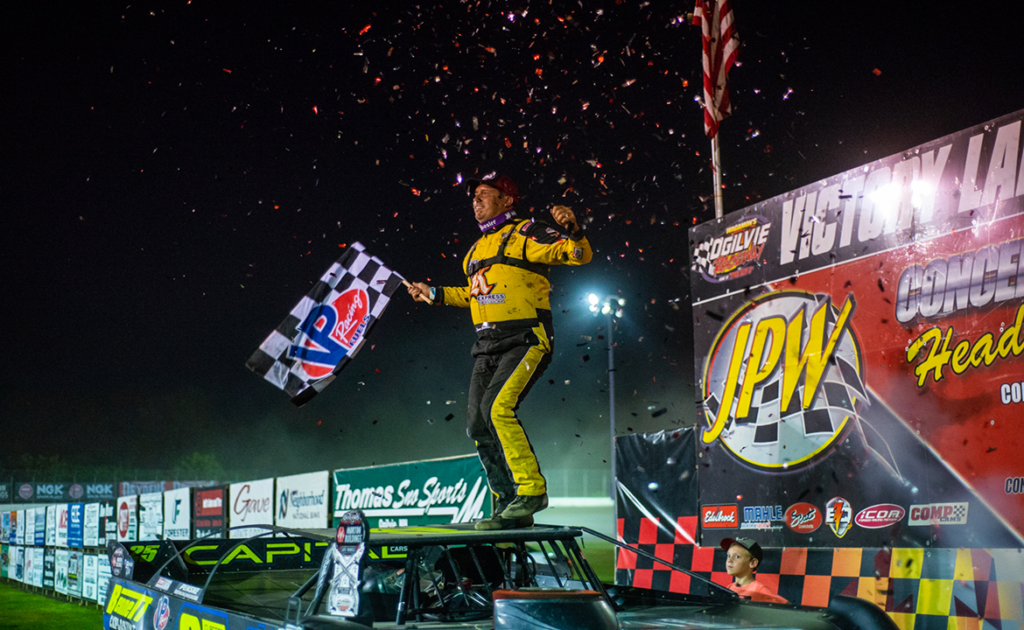 When Skyline Motorsports was left without a driver to field its second car back in mid-June, Shane Clanton was there to answer the call. Fast forward to Saturday night at Ogilvie Raceway and he turned it into a winning decision.

It certainly didn’t come easy for the Zebulon, Georgia-native. He charged up to the front from his ninth-place starting spot and broke into the top-five by the fifth circuit. Clanton chose to hug the bottom line throughout the entire race and made it stick better than any of the cars in the field, driving underneath Sheppard for second on lap 22 and polesitter Ricky Weiss for the lead on lap 29.

In lapped traffic, Clanton was spectacular as well, masterfully maneuvering to the inside of a pack of four slower cars to keep his lead over Sheppard with under 20 circuits remaining.

“We were good in lapped traffic,” Clanton said. “They could scoot and I could feel the gap, that’s how I got by Jimmy [Mars] and [Ricky] Weiss. They slipped and our car was good enough to take advantage and fill the hole.”

But “The Georgia Bulldog” had yet to face what was potentially his biggest challenge of the night – a restart with 15 laps to go and a hungry Sheppard on his rear bumper. Forced to try and outrun the Rocket1 Racing guru, Clanton stuck to his guns on the low side and simply drove away from Sheppard and Mars in the closing laps to earn his 44th career World of Outlaws victory and first since Screven Motor Speedway back in early February. 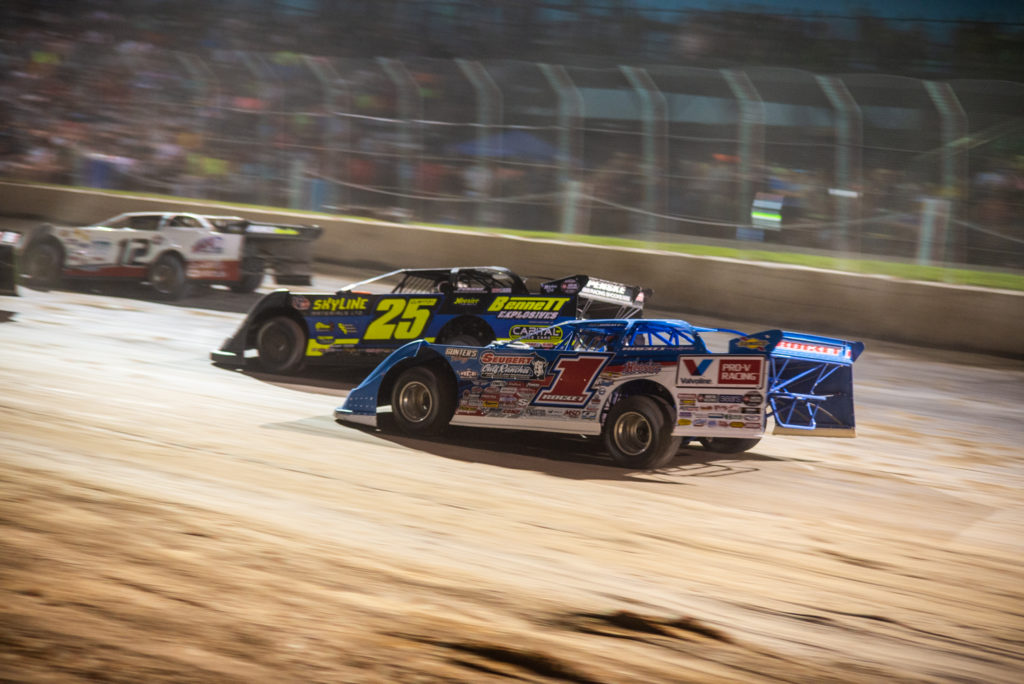 Earlier this year, Clanton picked up a huge win in a Dirt Late Model Dream preliminary feature at Eldora Speedway under then-car owner Ron Davies in his signature black-and-yellow #25. Now, just eight races into driving under the new team, Clanton has picked up his first win for car owner Greg Bruening. And what a turnaround time it’s been for the pairing, having to replace former Skyline driver Chris Madden who, ironically, won the last two World of Outlaws visits at Ogilvie.

Altogether, Clanton is just happy to be back in Victory Lane with Capital Race Cars. The new team is clicking, and Clanton has more time now to focus on the little tweaks to his setup while his dedicated crewmembers take care of the rest. And that might have been all Clanton needed to get back to the winner’s circle – just a bit more time spent in the pits fine-tuning his ride. 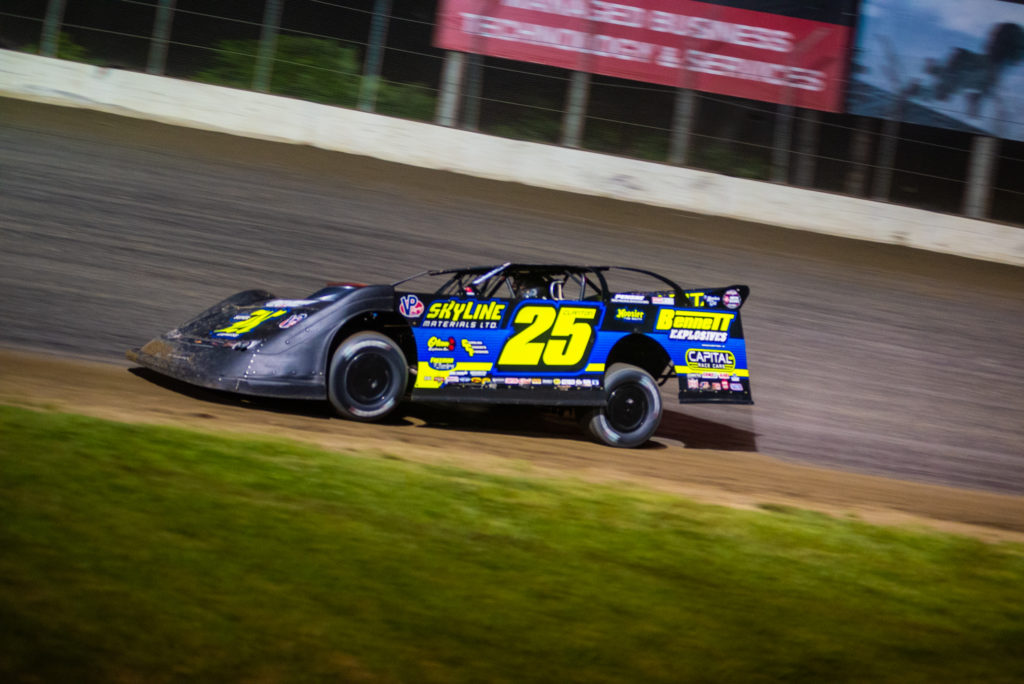 “We just got some better help and the crew is just gelling,” he said. “With as much help as I’ve got, I get to concentrate on making adjustments to, instead of working on, my racecar, so that means a lot.”

But this triumphant effort wasn’t just any ordinary win. Sheppard and the Rocket1 Racing team have been on an incredible hot streak that still seems endless, sitting 192 points ahead of second-place and on an unheard of 21 top-fives in 22 starts. Clanton’s been around the block too many times to not grasp the magnitude of what he accomplished on Saturday night – catching, passing and then holding off the blue #1.

“The 1 car had won five-in-a-row, so if all of them other guys thought they could outrun him, just come do it,” Clanton said. “It’s tough. That’s probably the best team in the sport, hands down, year after year. This roll they’ve been on this past month is tough. But we’ve been working and tweaking on our car, and it showed tonight how good we can be.”

Even though he fell short of the record-tying six Morton Buildings Feature wins in-a-row, Sheppard as well drove a great race on the bottom, giving chase to Clanton and applying heavy pressure all race long to earn himself a runner-up finish that he and the team are happy with. 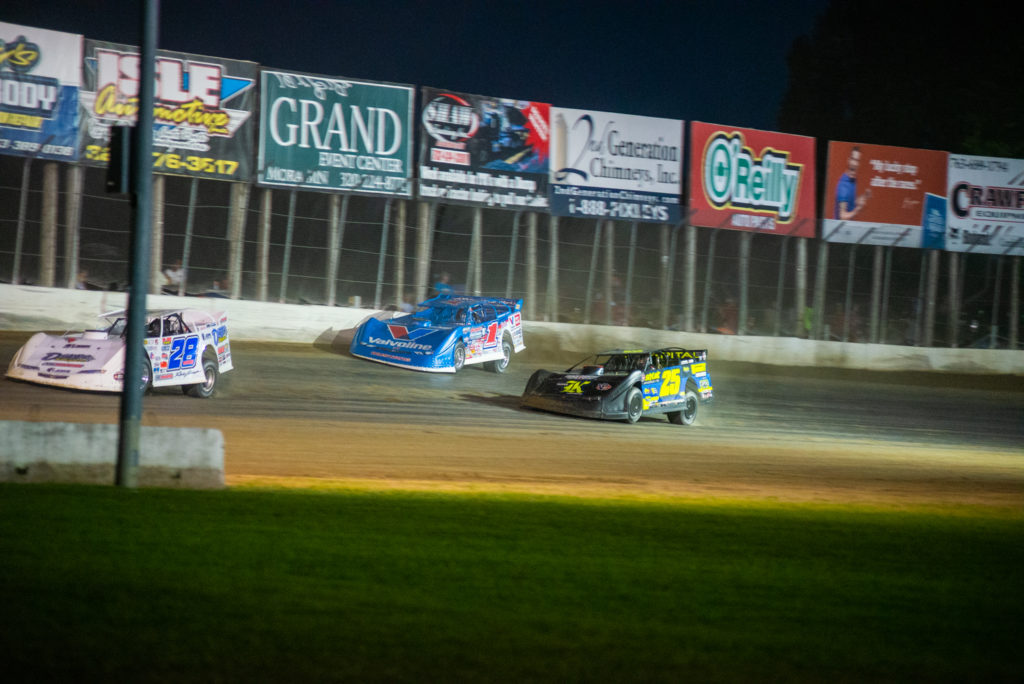 In the grand scheme of things, Sheppard said Rocket1’s error occurred earlier in the program, when he was only able to muster a 10-place time-trial effort, costing hm a few starting spots in his Drydene Heat Race.

“I just got us behind in Qualifying, I didn’t run the right line and that put us starting fourth in the Heat Race,” Sheppard said. “We ran third in the Heat and had to start seventh, but that’s where we messed up tonight, having to start back in the Feature.”

A lot of mutual respect is shared in the pit area between these two Dirt Late Model giants. Mark Richards has been fielding racecars on the World of Outlaws circuit next to Clanton and his operation for over 15 years, and Sheppard has been in that equation for almost three of them. Plenty of their own side-by-side moments have been seen in the last few seasons as well, and that unwavering admiration for one another was again put on display. No rough driving, no disregard for racing room. Just a good, clean race to the checkereds.

“Once again, we had a really great racecar and are definitely not disappointed with second,” Sheppard continued. “We had a car capable of winning and that’s all that we can ask for. We know we’re not going to win all the races. Shane did a really good job and he’s been out front every night on this trip, so congratulations to him.”

Bagging yet another podium with the Outlaws on Saturday night was the Menomonie, Wisconsin, driver, Jimmy Mars. “The Iceman” pulled a three in the redraw and made that starting spot count over 50 laps, keeping it in the top-five for every circuit en route to his third-place finish.

Tonight, the Outlaws head into Mars’s home track, Red Cedar Speedway, for a the last of the Series’ track debuts in 2019 – an event that Mars has put in some work to help put on. He’s ready for one incredible show and knows the fans will see a race they won’t soon forget.

“I’m pretty excited. Hopefully, we’ll have a good crowd. I hope a lot of fans are excited about coming out and supporting it. It’s going to be a first-time-ever deal there, so I’m thrilled about it all,” Mars said.