Series Gets Down and Dirty in Thick of Schedule 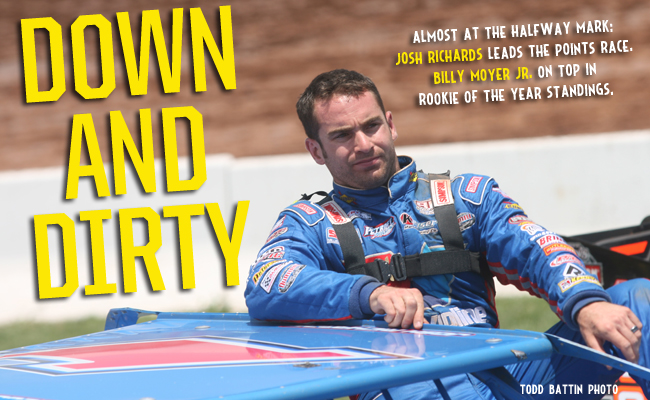 Series Gets Down and Dirty in Thick of Schedule

The World of Outlaws Craftsman® Late Model Series has lived up to its slogan so far in 2016, having 20 nights of shootouts in a season almost halfway finished. The series has travelled to 10 states throughout the East and Midwest, and will cultivate the Earth in nine more before the season finale in October.

Three-time series champion Josh Richards leads the other 15 full-timers so far in points, having eight wins on the season.  The other 12 wins have been divvied between not just the Platinum drivers, but regional favorites such as Dale McDowell and Tim Dohm.

Whether a series driver is winning or winless, the Outlaws collectively carry the motivation of stealing each night’s purse from the regional favorites and locals; more than not they have made winning a moonshot from the series’ outsiders, which have taken only four shows. Particularly within the group, there are a few stars shining among the cluster in 2016.

Look North to Richards, who is on the brink of bringing home his fourth championship. All the while Billy Moyer Jr. leads the Rookie of the Year race with his consistency, though an impending feature win has yet to come.

Richards flipped the script of 2015’s campaign, leading defending series champion Shane Clanton by more than 200 points. At this point last season, Clanton led Richards by 186 points with Darrell Lanigan, the series’ career wins title-holder, splitting the two. Without Lanigan breaking-up the duo this time, nothing stands in the way of Richards and Clanton battling it out night-to-night in the pursuit of this season’s championship.

“We still have another half of racing to do,” Richards said. “We’re just going to try to pick it up. I mean, it’s how racing is. Last year we were up and down – no consistency. This year we got our consistency. It just took some time to get our adjustments down and our engine package rolling.”

Of Richards eight wins this season, his most dominant came at Weedsport Speedway (N.Y.), where he won by 10.363 seconds over Clanton; he led by almost 15 seconds at one point in the race and lapped cars up to the top five. But, this was not Richards’ most memorable win so far.

Farmer City Raceway (Ill.) is what he cherishes the most in 2016. There, Richards swept the two-day event, giving him the points cushion he has maintained throughout the rest of this season. Richards had yet to win at Farmer City Raceway prior to this year’s stop.

“I was happy winning the first night,” Richards said. “But to come back and win the second night – the biggest night – that was definitely ‘the one’ so far.”

The other 15 platinum drivers have called Richards’ number. Brandon Overton, who scored his first career series win at Lernerville Speedway on June 25, dethroned Richards at that particular race. But, once isn’t enough in a rigorous schedule.

“Everyone is gunning for Josh, you know what I’m saying?” said Overton, who is fourth in points. “You can tell everyone does. He’s good and people know he’s good. It’s not just my biggest guy but everybody’s.”

Another driver not to be left out of the equation is Moyer. Moyer’s father was the first driver to capture a series title in 1988; he went on to double-down, winning two more in 1989 and 2005. The younger Moyer, blazing his own trail, is seeking not only a rookie of the year title but also a series title to add to the family legacy.

“I think we’re running all right,” said Moyer, who is sixth in points. “Hopefully we can keep on. I’d love to get into the top five of this national thing my first try. To be leading rookie of the year, it speaks a lot about our team. We’ve had a lot of part failures or falling out of races, but we’re keeping strong.”

The World of Outlaws Craftsman® Late Model schedule is in high-gear, leading into October’s Bad Boy Off Road
World of Outlaws World Finals in Concord, N.C. Until then, drivers’ emotions and equipment will be tested – with only one driver reigning supreme.

“It was a long time coming [for Overton]. He’s a great talent,” Richards said. “Then everyone else: [Rick] Eckert has been going at it a long time and he’s got a championship. Chub [Frank]…Morgan Bagley…it’s great to see this sport evolve, and see new people come in. You never have this series figured out, and when you think you do you don’t. You always have to work at it, and you’re constantly challenged.”