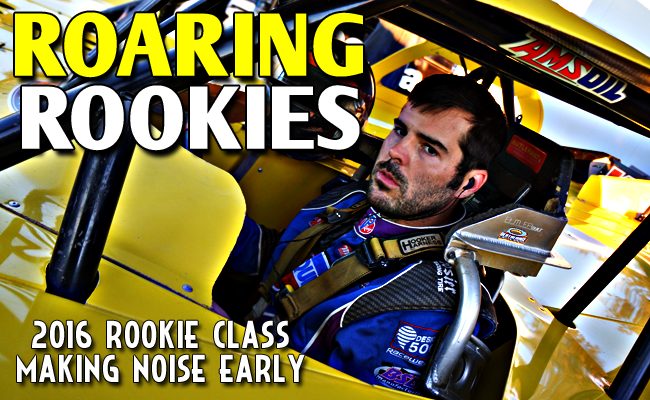 Continue season-long battle for prestigious Rookie of the Year honor

CORRECTION – Franklin currently drives a Longhorn Chassis but has bought two Moyer Victory Chassis and plans to switch over.

CONCORD, N.C. – March 11, 2016 – As the World of Outlaws Craftsman® Late Model Series makes it way from of the southeast to the Midwest following the first five races of the season, the 2016 rookie class continues to grow as the series returns to action at the Illini 100 at Farmer City (Ill.) Raceway on April 1 and 2.

Joey Coulter and Paul Wilmoth Jr. were already gearing up for the season-long battle prior to the start of the season, with Billy Moyer Jr. also considering the possibility of competing for the title. Now, after the first five races of the season, the rookie class has begun to take shape with Moyer and Dennis ‘Rambo’ Franklin officially joining the fight.

Leading the pack to start the season is Franklin driving the M-W Transport/Nicholas Plumbing Longhorn Chassis No. 2F. Franklin decided to make his run for the rookie title official following the opening weekend at Screven Motor Speedway in Sylvania, Ga.

“Right now we feel pretty good,” Franklin said. “We have a few problems with the cars, we just got to get them worked out and I think we are going to be alright.”

Making all five features and sitting 11th in the standings, Franklin started the season off strong on opening weekend at Screven, capturing an eighth place finish on the first night then an 11th the following night.

The Gaffney, S.C. -resident did not fare as well when the series moved further south to Volusia Speedway Park in Barberville, Fla. Franklin captured his best finish of the 45th Annual DIRTcar Nationals on opening night when he finished 19th.

“Usually we run pretty good at Screven,” Franklin said. “We unloaded fast, then had a few things that broke on us, so it was a little disappointing leaving there. Volusia we were good enough to make the field but we weren’t any better than that. We just have to get our program a little better, that’s what we are working on now, figuring out what the problem is.

“When you run with the World of Outlaws you have to up your game. We really had higher expectations to run better but just wasn’t that great…We’re going through our cars right now, have them both torn apart to see if we can find anything bent or what is going on.”

Piloting the Crop Production/Mesilla Valley Transportation Moyer Victory Chassis No. 21JR, Moyer currently sits second in the Rookie of the Year standings and 15th in the championship standings. Moyer has made four of the five features with his best finish being two sixth place finishes, one on the second night at Screven and the other on the second night at Volusia.

Moyer, a Batesville, Ark. -native and son of Hall of Fame driver Billy Moyer Sr., also captured a fast time award at Screven and a win in DIRTcar Late Models action at Volusia.

“I think we’re alright right now,” Moyer said. “We missed that one show at Volusia. When you don’t qualify good you bury yourself, but I don’t think we’re too far off. We won that Monday night race [DIRTcar Late Model race at Volusia] and it wasn’t a point’s race, naturally. That would’ve been nice.”

“I think we’re going in the right direction. These cars we are getting them better and better and I just got to keep on digging, we are definitely in it for the long haul.”

Moyer made his decision to run the full season with the World of Outlaws and compete for the 2016 Rookie of the Year title by posting on social media last week, thanking his sponsors for the opportunity.

“I’ve been thinking about it and everyone’s been asking me here and there,” Moyer said. “I feel like this is my best chance to win [the Rookie of the Year title] as far as I am a lot more prepared than I have been in the past, financially, mentally and with my ability.

“Crop Production Services, Mesilla Valley Transportation and my uncle at Karl Performance made it possible to where I could do this, and we are just going to hit it wide open and hopefully win it and creep up there in the top five or seven in points. It’s going to be hard because there’s a lot of good cars here, running with Josh, Shane and Rick, those guys are tough at any track everywhere we go, so that will make me a better driver.”

Joey Coulter, who has made his way to dirt racing from the NASCAR Camping World Truck Series and Xfinity Series, sits just behind Moyer in the 17th point’s position after making three of the five features.

“One thing I like about dirt racing, you don’t show up and get three hours of practice, you get three laps and either you figure it out or you don’t,” Coulter said. “That kind of yes or no answer to your weekend is a little bit of added pressure that makes everyone step up that extra 10 percent.”

The transition to dirt has challenged the Mooresville, N.C.-resident, as Coulter has scored one fast time award (at Screven) with zero top five’s and top 10’s so far.

“In some ways this season has gone better than I expected, and in some ways it’s been a little disappointing,” Coulter said. “It depends on which Joey you talk to. If you talk to the over-competitive, got-to-win Joey, he will say that Screven went really well and Volusia was a disaster. If you talk to back in reality Joey, he’s pretty happy.”

Coulter, driving the Tempest Cycles/Simpson Racing Products Rocket Chassis No. 2 started the season off strong, finishing 12th and 19th respectively on the two nights at Screven before missing the first two nights at Volusia, then finishing 28th on the final night.

“I think Screven went really well,” Coulter said. “I was excited to start off there because I have been there before and I have more laps there then a lot of places. Rick Eckert put it the best, he said we had “moments of brilliance” through the first few races.

“Volusia was exactly what I expected it to be. You have 60 of the best late model drivers in the country, and one guy that has run pavement all his life. We learned a lot, the car had speed. [Crew chief] Harold Holly and all the guys had a great car for me and Josh and Mark Richards helped out a lot…for the first five races that’s all I could ask for.

Currently fourth in the Rookie of the Year standings and 19th in the championship standings, Wilmoth admittedly has struggled to start the season.

The Clarksburg, W.Va. -native has experienced an abundance of success in his home state and surrounding areas, as he is an eight-time track champion and owns over 200 career feature wins.

The move to the World of Outlaws in 2016 has come with growing pains for the 45-year-old driver. Wilmoth started the season strong, making the season opening feature at Screven and finishing sixth in his Appalachian Minerals/Octane Race Products Sweet/Bloomquist Chassis No. B1.

Following the opener, Wilmoth missed the next four features, dropping him in both the rookie and championship standings.

“We plan on heading out to Illinois and starting all over, like a new season for us,” Wilmoth said. “Hopefully we have some better finishes than we did down south. We just had a little bit of bad luck, but I think we will be fine from this point.

“Everyone has told me, once you get Florida out of the way you just start all over and everything will be alright, so that’s what we are hoping for. We had some issues that put us behind and we had to chase the car in Volusia. It seemed like every time we went out we had something crazy happen, so that put us behind every night, all night long.”

With only a few weeks remaining until the series returns to action, Franklin, Moyer, Coulter and Wilmoth look to progress their season-long battle from the southeast to the Midwest as each driver eyes the 2016 Rookie of the Year title.

The World of Outlaws Craftsman® Late Model Series returns to action at Farmer City (Ill.) Raceway for the prestigious Douglas Dodge Ram Trucks Illini 100. Practice will begin March 31 with feature racing kicking off on April 1 and 2.