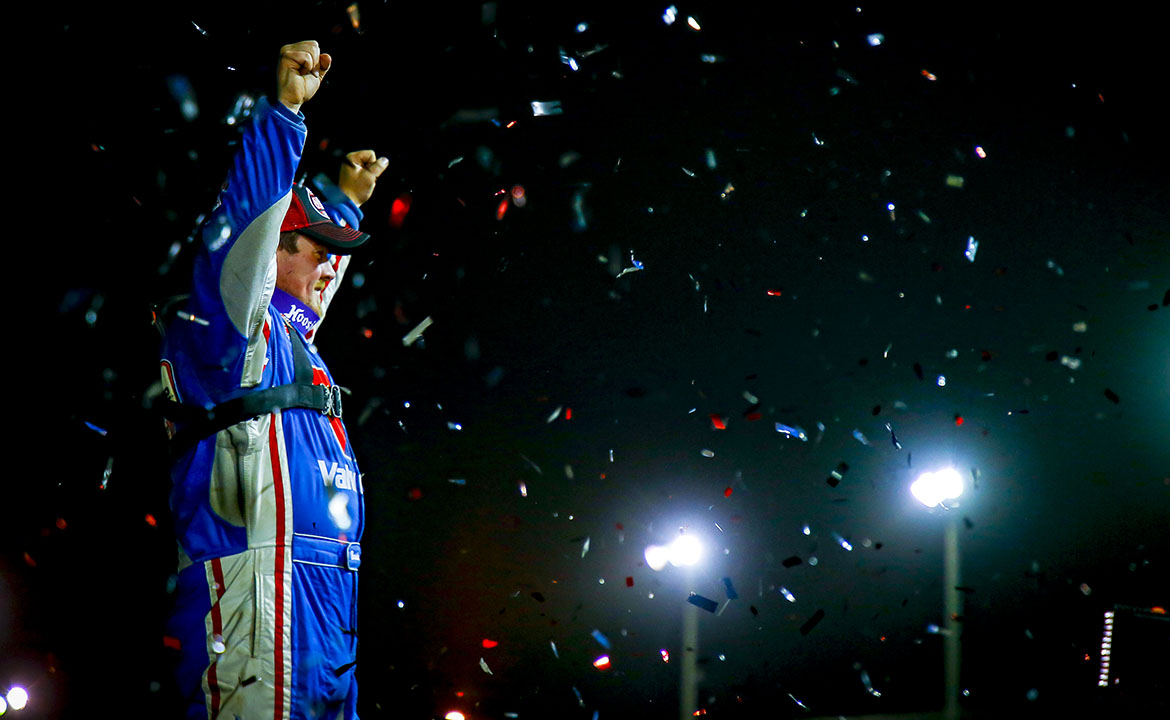 Chris Owens Photo
Sheppard Takes Aim at Historic Streak This Weekend in Tennessee
By Jordan DeLucia | March 21, 2019 at 10:20 am

CONCORD, NC — Only six drivers in World of Outlaws Morton Buildings Late Model Series history have ever managed to put together a consecutive win streak of four or more. After winning four consecutive races at Volusia Speedway Park in February, “The Rocket Shepp” Brandon Sheppard will go for five-in-a-row Friday night at Duck River Raceway Park and, if victorious, attempt to make it six on Saturday night at Smoky Mountain Speedway.

Currently, the man atop the win-streak chart and Sheppard’s overall target in the next three races is three-time Series Champion Darrell Lanigan, who set the current win streak record in the summer of 2012 with a whopping six Morton Buildings Feature wins in a row — July 12 at Red River Co-op Speedway, July 13 at River Cities Speedway, July 14 at North Central Speedway, Aug. 4 at Cedar Lake Speedway, Aug. 6 at Independence Motor Speedway, and Aug. 7 at Shawano Speedway.

For Sheppard to break six, he’ll need to win both races in Tennessee this weekend and the first 25-lap leg of the Illini 100 at Farmer City Raceway on April 5 – a track he won the 75-lapper at most recently in 2017. As daunting of a task as this may seem for any other driver and team, the Mark Richards Racing/Rocket Chassis house car team hasn’t shown any signs of slowing down since their fourth consecutive victory at Volusia, as they also won the Indiana Icebreaker at the Brownstown Speedway last Saturday night.

Behind Sheppard and his frequent displays of dominance on dirt is the rest of the Rocket1 Racing team. Car owner Mark Richards said he has full confidence in his crew to get the job done on Friday and beyond.

“It speaks a lot to what this team is all about,” Richards said. “The crew guys that we have brought together to form this team, they’re really the reason why this team does what it does.

As most modern-day race teams employ, everyone on the team has specific responsibilities to take care of both on and off the racetrack. The difference-maker for Richards and his team being, they don’t waste time with fabrication in February through November, which allows the entire crew to focus strictly on maintenance and improvements during active periods.

“We’re working on stuff so we’re ahead of the game come June or July, we’ve got equipment ready and we’re not building stuff in the middle of the summer,” Richards said. “We build all of our stuff during the winter. We hardly ever put a car together during race season.”

With all of that personal responsibility on the team comes the expectations of being one of the most recognizable teams and cars in Dirt Late Model racing. Sheppard has always displayed his signature humility in Victory Lane and never admits to feeling any extra pressure behind the wheel in important races. To compliment that notion, Richards has put streaks like this together before, and knows gunning for such milestones doesn’t cut a bigger check or earn any extra championship points at the end of the night.

“We don’t add any pressure,” Richards said. “Obviously, our goal is to win every race we’re in. But as far as looking at records, we’ll let them fall where they fall in the end.”

At Duck River and Smoky Mountain, records will remain non-existent in the minds of the big-blue #1.

“There’s just too many variables that make it to where you could have the best plan in the world and something still happens,” Richards continued. “We’ll just do what we can do and hope for the best.”

In opposition of Sheppard and the crew’s best efforts, the “Bluegrass Bandit” Darrell Lanigan will be a part of the field looking to put a stop to Sheppard’s climb to five-straight World of Outlaws wins this weekend. But, to concur with Richards’ comments on how much the record will be on his mind, Lanigan said it’s certainly not anything he’s paying much attention to.

“I don’t really pay that any mind,” Lanigan said. “He’s been on a hot streak and they’ve got a good team. It takes a lot of luck to win another two races — I’m not saying they can’t, but it does take a lot of luck. Everything has to go their way, but there’ll be a lot of good cars down there so it should be interesting.”

As previously noted, one of Lanigan’s 2012 streak wins came at Cedar Lake Speedway in the USA Nationals, another of the Series’ many “crown jewel” races that every driver makes a special effort to try and win. Lanigan’s drive to victory there over six years ago was nothing short of his best.

“Track conditions were pretty treacherous that night, I remember,” Lanigan said. “I mean, it was fast and rough. Just to go out there and not break for 100 laps is something else.”

Like the Rocket1 Racing team has done this year, the rest of the Darrell Lanigan Racing team put in a huge effort to build that six-race streak, and they’ll be bringing the same thing to the track this weekend to protect it.

“It’s an everyday effort,” Lanigan said. “We work 12-15 hours just about every day. To be a top-caliber team, it takes that kind of effort because there’s other teams out there doing it just to keep up and not have any failures. It takes that effort just to have a top-level team.”