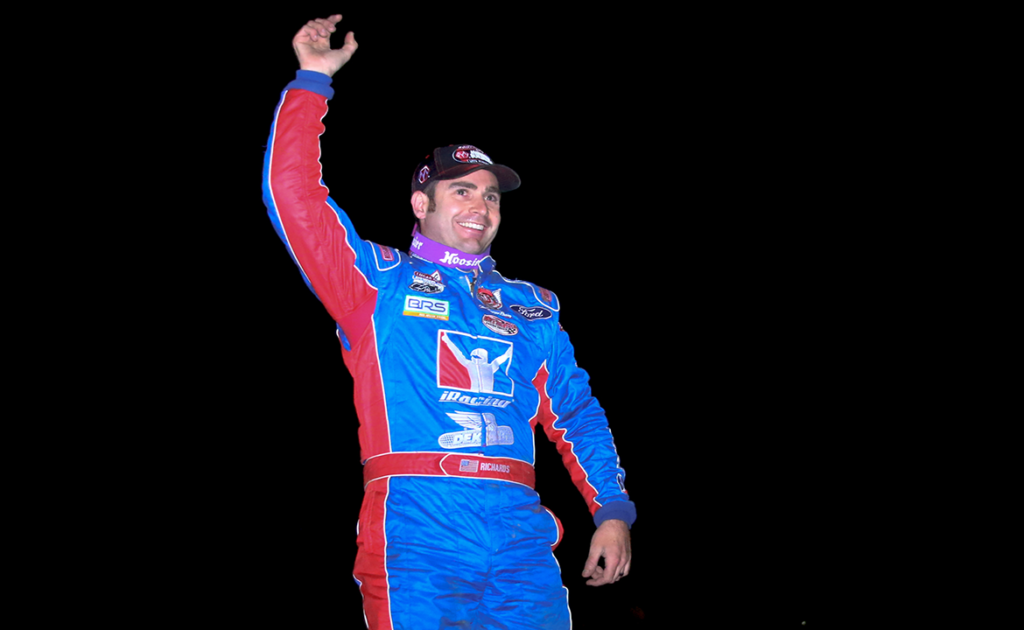 WHEEL, TN – As the field crossed Duck River Raceway Park’s start/finish line with only five laps remaining on Friday night, leader Josh Richards could see the light at the end of the tunnel. Waiting for him on the other side was his 77th career World of Outlaws Morton Buildings Late Model Series Feature win and his first in 1,225 days.

There was just one problem – Dennis Erb Jr. was reeling him in fast. Richards was ripping the middle-top side of the high-banked bullring as Erb was smooth sailing down low, until Richards looked outside the fence and saw his crew guys signaling him to move down. Richards followed the advice to make the line switch and made it through the final five laps untouched to collect his first World of Outlaws win in 134 tour races.

“At the end, I saw my guys, they were showing I had a gap when I was running the top. And then they were closing it up so I switched and went to the bottom and just tried to ride it out,” Richards said.

The last time Josh appeared in World of Outlaws Victory Lane, his father Mark was standing right there with him at The Dirt Track at Charlotte in October 2016. And on Friday night, Mark was right in Victory Lane again, watching his son smile for the cameras. A special moment for the both of them, despite being a part of two different teams.

“This one means a lot. To win the first Outlaws race since I’ve been in my dad’s [Mark] car, this one’s really special,” Richards said.

But this victory certainly wasn’t handed to Richards. A caution flag on lap 14 re-stacked the field and put him behind polesitter Erb for the restart. Richards swooped up some high-side momentum and drove by Erb two circuits later to regain the lead he would never relinquish.

“I was gonna commit and just charge and try to roll the top, just kinda see what we had,” Richards said. “It was a good gauge because I knew [Dennis] was gonna be really consistent on the bottom, and he was. So I was able to move around and just find a couple little spots.”

Through the next 34 laps, Richards fended off multiple challenges from behind on several restarts. The most intense of which came on lap 31, where Erb pulled up beside him and briefly took the lead down the backstretch but was quickly shut down by an untimely caution flag.

Erb wouldn’t get another good run at the Bowyer Dirt iRacing #14 until he began reeling in Richards in the final laps. The top line seemed to not be as effective as it had been earlier for Richards, and Erb said he knew the line change had to be coming.

“I was hoping [Richards] wouldn’t [move down], but I kinda was thinking that he should’ve. When he moved down there, it was going to be pretty tough for me to get around him,” Erb said.

Overall, a great race on a beautifully prepared racetrack for the great Tennessee crowd.

“The track was phenomenal tonight, as far as being able to move around and race on. I’ve never been here when it’s been that good. It was a lot of fun,” Richards said.

While Richards and Erb played cat-and-mouse out front, Brandon Overton, of Evans, GA, had been grinding it out against the rest of the top-five. He had been running inside the top-three since the halfway point and with the white flag in the air, he set his sights on Erb’s runner-up spot.

And that’s exactly what he did. Erb moved up ever so slightly as Overton slid underneath and beat Erb to the line, his last-ditch effort to break into the top-two in the final corners paying off.

A youthful favorite in the Southeast Super Late Model ranks, Overton knew coming into Friday night that he had to be on his A-game if he wanted to get a good finish.

“To come up here and run with them, these are some of the best guys out, I know there’s a lot of heavy hitters here, and run second, that’s not bad for the first night on a new car,” Overton said.

Points leader Brandon Sheppard patiently climbed from his eighth-place starting spot to come back and finish fourth for his seventh top-five in eight races, and now sits 62 points ahead of Ricky Weiss – a climb from the rear to finish eighth Friday night for the young Canadian. Darrell Lanigan, of Union, KY, now sits third in points after a 27th-place finish, an apparent internal malfunction on his Viper Motorsports entry.

Scott Bloomquist Racing teammates Chris Madden and Scott Bloomquist also struggled a bit Friday night, finishing ninth and 13th from their redraw starting spots. Madden now sits 100 points back of the leader in fourth, Bloomquist 128 points back in fifth. The Team Drydene drivers each have wins at the next venue, Smoky Mountain Speedway, and they’ll both look to rebound on Saturday night.

The Outlaws head east to Smoky Mountain Speedway in Maryville, TN for a 60-lap, $12,000-to-win shootout on Saturday night around the big 4/10-mile oval for an event known as the Tennessee Tipoff. Hot Laps are scheduled for 5:15 p.m. ET; watch live on DIRTVision!