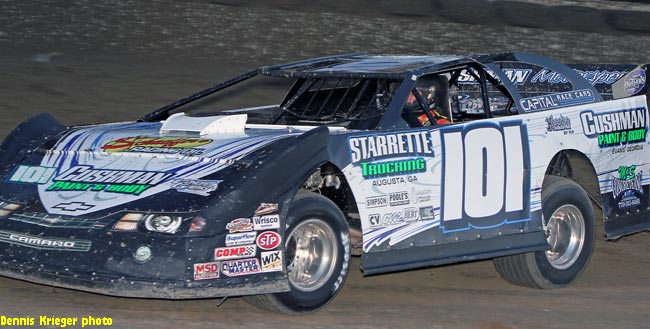 SWAINSBORO, GA – May 2, 2013 – With several head-turning performances in recent years, Casey Roberts has put himself in a select group of regional drivers ready to break into Victory Lane on the World of Outlaws Late Model Series.

And this weekend the 35-year-old standout from Toccoa, Ga., just might have his best shot yet at earning his coveted first-ever triumph on the nation’s premier full-fender tour.

The WoO LMS is invading Roberts’s home state for a doubleheader, not only visiting a reborn facility 15 minutes from his home (Lavonia Speedway on Fri., May 3) but also Swainsboro Raceway on Saturday night (May 4).

It’s Swainsboro, of course, where Roberts has registered two of the biggest victories of his career and enjoyed one of his best WoO LMS outings.

“We’ve had some pretty good luck down there over the years,” Roberts said of the three-eighths-mile Swainsboro oval. “It’s about a three-hour drive for us so we don’t race there a whole bunch, but whenever we go there we’re usually pretty good.”

Roberts has won Lucas Oil Late Model Dirt Series and Ray Cook’s Southern Nationals Series events at Swainsboro, both coming in 2009. He also finished fifth in the track’s inaugural WoO LMS show, in 2010, after starting 10th, proving he can move forward when competing against some of the country’s top drivers.

While Roberts hasn’t started the last two WoO LMS A-Mains contested at Swainsboro – he failed to qualify in 2011 due to heat-race mechanical trouble and did not enter last year’s event because of a schedule conflict – his last appearance there showed why he’ll be a favorite this Saturday night in the 50-lap, $10,000-to-win WoO LMS feature that headlines Swainsboro’s annual Pine Tree 100.

“We set fast time there last year for Ray Cook’s Southern Nationals deal (in mid-July) and we led a good bit of (the feature),” said Roberts, who finished third in the 53-lap event. “Me, (Chris) Madden and Mikey Marlar had a real good race. We swapped the lead in lapped traffic a few times, but Madden ended up winning it.”

Roberts is looking forward to a return trip to Swainsboro, a track he rates highly for his competitive nature.

“It’s pretty flat, not much banking at all, but you can still get around there pretty good,” said Roberts. “They put some new dirt on it a while back and it’s really helped out. It used to be one lane in the rubber, but (owner) Paul (Purvis) done a great job putting clay on it and getting it racier. I’m sure he’ll have it in good shape on Saturday and we’ll be able to put on a good show.”

Roberts will enter this weekend’s WoO LMS double-dip in the Peach State with as much confidence – and as much fanfare – as he’s ever had. Much of it derives from the ambitious 2013 racing schedule he’s undertaken, highlighted by appearances in nine of the 12 WoO LMS events completed to date. He signed in for all eight of the tour’s February events in Georgia and Florida (a fifth-place finish in the season opener on Feb. 8 at Screven Motor Speedway in Sylvania, Ga., was his best during that stretch), and two weeks ago, on April 20, he recorded a World of Outlaws career-best finish of fourth at 311 Motor Speedway in Pine Hall, N.C.

“If you’re ever gonna hope to beat ’em, you just gotta keep running with ’em and learning from ’em,” Roberts said of racing with the Outlaws. “You realize that to race at their level, you just gotta be almost like you’re qualifying every lap. You gotta be up on the wheel and have your car set up right.

“The key is always gonna be qualifying good and getting a good heat race (finish) to put yourself in line to draw a (prime starting spot) pill for the feature. If you can have good luck on the draw, you’ll be in position to do something. Then you have to make the right decisions and run hard for 50 laps and hopefully be there at the end.”

With quality equipment (Capital Race Cars, Custom Race Engines) supplied by Billy and Ann Cushman of Augusta, Ga., at his disposal, Roberts knows he has the ingredients to battle toe-to-toe with the Outlaws.

“Mr. and Mrs. Cushman just give me good stuff,” said Roberts, who is in his 10th season driving for Cushman Motorsports. “The money they spend goes a long way. They kind of got us with Marshall Green and (Shane) Clanton with the Capital Race Cars deal and that’s really helped our program a lot. It’s picked us up, and hopefully we can show it this weekend.

“Gosh, the Lord’s blessed me with such good car owners,” he continued. “It seems like a bunch of guys go here and there and split up with owners all the time, but we just get along real well and they just treat us like we’re part of their family. They’re truly good to me, my wife (Cathy) and my kids (daughter Brynn, 14, and son Mason, 9). It’s just an all-around good deal.”

There’s no doubt Roberts would love to ratify his prodigious talent with a WoO LMS victory – and achieving that goal this weekend would be a dream come true.

“It’s definitely exciting to have the World of Outlaws come so close to home for us for two nights of racing,” said Roberts, whose lone win this season came in a Ray Cook’s Spring Nationals Series event on April 12 at Tri-County Racetrack in Brasstown, N.C. “We don’t travel like the World of Outlaws guys, but we do most of our racing two, three and more hours away from home, so we don’t really race close to home that often. I’m sure we’ll have a lot of friends and family there (at Lavonia and Swainsboro) this weekend because we’ll be closer to home, so it would be pretty neat to pull off a win.”

Swainsboro Raceway’s WoO LMS event on Saturday night (May 4) will serve as the grand finale for three full days of activities that comprise the town of Swainsboro’s annual Pine Tree Festival, which includes a Saturday-morning parade through the downtown streets.

The speedway’s pit gates are scheduled to open at 12 noon and the grandstands will be unlocked at 3 p.m. Practice is set to start at 6 p.m., followed by qualifying at 7 p.m. and racing at 8 p.m.

Swainsboro’s Mud Bog will also be in operation on Saturday starting at 5 p.m.

More info on Swainsboro Raceway’s fourth annual WoO LMS event is available by logging on to www.swainsbororaceway.com or calling 478-252-1300.