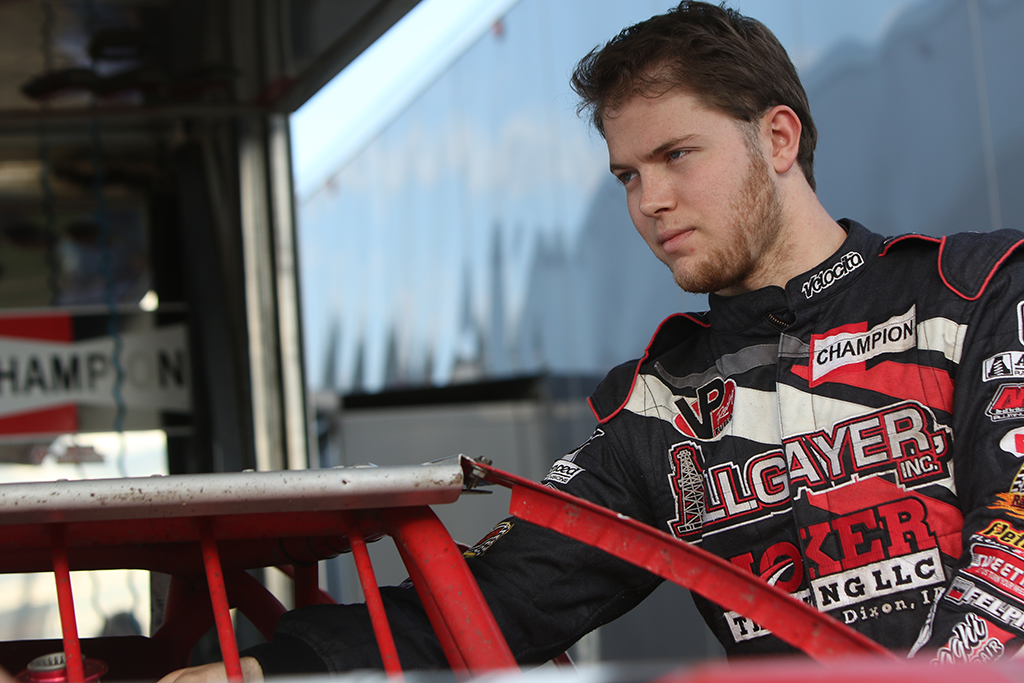 (Today is Part 2 of a look at young DIRTcar Late Model superstar Bobby Pierce and how he’s achieving success in the top echelon of the sport. Click here for Part 1.)

The giant numbers Bobby Pierce has put up in a Dirt Late Model at the young age of just 23 is simply staggering, often drawing comparisons to some of the already-established legends of the sport like Bloomquist, Moyer and Purvis.

Often times, the children and grandchildren of auto-racing legends are compared to those who came before them, and the father-son combination in the Pierce family is no exception.

The Smooth Operator has had plentiful success already, and he’s destined for more in the future. But none of that would be possible without the great support of his sponsors and tutelage he’s received from his father.

“Who knows what I might be doing if he didn’t push me in the right direction,” Pierce said. “I’m glad he did, because here we are. And so far, we’ve made it work pretty well, but it’s taken a lot of help to get me here. All the sponsors through the years, all the fans buying t-shirts, all that helps to be able to keep going and make it to the next race.”

Moyer. Moran. McCreadie. Each of those names carry decades of success in motorsports, spread throughout two different generations. As is present in the conversations of their fans nationwide, the ever-popular debate of “who is/was better” remains a popular topic of discussion. The name Pierce is often one thrown into that same conversation. Bobby’s well aware of it, but has never seriously been distracted by it.

“When I was starting out, I was pretty young, and you don’t really have a whole lot of expectations to do well. By the time I was old enough to where it probably would have bothered me, I already started winning races. So, I never really got the full effect of that,” Pierce said. “Even he gives me the benefit of the doubt a lot, and when someone asks, he’s like ‘oh he’s already better than me.’ So that makes me feel like there’s not really any pressure there.”

Bob has been the crew chief on every dirt track ride Bobby’s ever driven. During the race, Bob can usually be found holding up the brightly colored “signal sticks,” giving visual directions to his son as the track and traffic ahead (or behind) changes. And at the end of every race, win or lose, he’s always celebrating in Victory Lane or back at the hauler helping to load up. The father-son bond the two share is not something that can be taught; rather, it’s something buried within their competitive nature and desire to win that makes them one of the most effective duos in the pit area.

“No matter what wins I got or what losses I got, they kinda count the same for him, too,” Bobby said. “He wants to see me win just as bad as he wanted to win races when he was racing. If not, worse.”

Back home in Oakwood, IL, the two help keep a family business running. Pierce Platinum Race Cars has been producing a unique brand of Dirt Late Model and DIRTcar UMP Modified chassis for many years. Most commonly found around the local dirt tracks of the Midwest, the Pierce Platinum brand has been awarded the DIRTcar UMP Modified “Chassis of the Year” award an astounding 10 times since its inception.

With his very crowded driving schedule each year, Bobby has not found the opportunity to acquire the fabrication skills necessary to assist with the production of the physical Platinum frames just yet. He does, however, dabble in the body work department for customers, producing the outer shells of the cars from raw sheet metal.

Bob plays more of a utility role around the shop, answering the phone and helping to put cars together, in addition to several parts. Pierce Platinum hosts an entire spare parts inventory for customers to purchase separately, which are fabricated in-house as well.

In recent years, the Pierce race shop also became an authorized Rocket Chassis dealer, serving as a Midwestern connection for those looking to get service and parts or give the tried-and-true chassis style a try. The #32 team decided to give brand co-owner Mark Richards’ popular creation a go themselves for the 2018 season and bought two brand-new Rocket XR1s to see how they would fare with Pierce behind the wheel. By the end of the year, he ended up getting all the Rocket-power he could handle and then some.

After veteran driver Earl Pearson Jr. made the decision to vacate the seat of the Dunn-Benson Motorsports #1 car following the 2017 season, Pierce received an opportunity from team co-owner Kemp Lamm to pilot the car for the 2018 season, which he gladly accepted. This put Pierce on a national tour schedule for the first time in his career, driving the new-to-him Rocket Chassis with an entirely new team.

“When they called me and wanted me to drive for them, I was like, ‘Well, we’ll give it a shot!’” Pierce recalled. “It was pretty different. A lot of positives and some negatives about it, but I was glad I did it.”

Pierce collected just six victories that season, tied for his career-low in Super Late Models, but was victorious in two $20,000-to-win events, adding to the long list of marquee trophies in his cabinet. According to Pierce, part of his struggles that year, which ultimately led to the end of his role at Dunn-Benson at the conclusion of the 2018 regular season, was the unfamiliarity of some of the tracks they visited and his lack of wrench-turning on his chariot.

“I’m so used to always working on the cars, and I was only there like half the time, which made it feel a little strange,” Pierce said. “There was a lot of new tracks I went to. All-in-all, it was a pretty good year. We picked up a few wins. I was basically working for somebody, so that was different too.”

However, his time spent in Dunn, NC, isn’t the only foreign race shop he’s raced out of during his career. Having raced his Dirt Late Model at the facility a few times by the summer of 2015, Pierce received an opportunity from Foristell, Missouri-based MB Motorsports to drive their NASCAR Truck at Eldora Speedway’s Dirt Derby. At 18 years old, this would be his first-ever venture into one of the world’s highest echelons of motorsports.

For his first go-around in a NASCAR Truck on dirt, not too shabby. To start things off, he joined an exclusive club of drivers to qualify on the pole for their first Truck Series start – members include only Bobby Hamilton, Kerry Earnhardt, Alex Tagliani and Ron Hornaday Jr. That weekend, Pierce held his own, leading a solid number of laps and finishing the race behind only winner Christopher Bell.

“I got a lot of publicity over that race. A lot of people who were NASCAR fans but weren’t really Dirt Late Model fans and had never heard of me were pretty interested about that. Like, some kid being able to run second to all of those guys,” Pierce said.

“We turned a lot of heads towards our sport too, so that was good. I was glad to have the opportunity to do that.”

Pierce went on to make seven more starts in the MBM truck over the next three years but was never able to replicate what he accomplished in the 2015 Derby, despite two more Derby starts. He did, however, learn a lot about those 358 C.I. machines on asphalt as well, making intermittent appearances at Martinsville, Phoenix, Kansas, Charlotte, Miami and Dover over the 2015 and 2016 seasons.

“One thing I realized, there’s a lot of G’s [forces] at those tracks,” Pierce said. “You get that for sure in Late Models, but you’re going just a little faster [in the trucks]. I think 165 [mph] was the fastest I went. That felt pretty quick, but it was a different feel than on a dirt track,” Pierce said.

“I think it made me a little bit better on dirt, just because it threw something else at me that was a different challenge. So, when I got back in the dirt stuff, it felt more like home.”

Although he may not have had the results he was after in each of his NASCAR starts, Pierce will more remember the lessons he learned on the pavement and was glad he got the opportunity to do something special and branch out.

“Everyone knows what NASCAR is, so I think it’s something cool to have on your resume,” Pierce said. “It would have been cool to get a win, but I can say I got a NASCAR pole, so that’s definitely cool to say.”

Returning to his family-owned Dirt Late Model team for the 2019 season, Pierce wheeled his Rocket XR1 Chassis to 19 wins through the latter portion of the season before switching back to a new Pierce Platinum before the year concluded. Since the 2020 season has been on hold for several months, he’s had the chance to do some thinking about why he, like each of his competitors, truly wants to hit the dirt again.

“There’s so much to be accomplished in Dirt Late Model racing, too,” Pierce said. “I’ve won a lot of big races, but there’s still so many more that I want to win. And aside from that, I want to win the races I’ve won again and again.”

If winning races is his endgame, then innovation and maintenance through this extended break is the route he’ll take to get there. You can bet he and his father will be keeping up in that department.

“Hopefully, we can keep progressing too,” Pierce said. “This sport’s definitely always changing, someone always seems to be getting a little faster and figuring something out. Gotta stay on top of it.”

And while Pierce says a return to NASCAR may someday be in his future, his heart’s in dirt racing right now. His goals, while easy to say and more difficult by the year to achieve, will likely stay the same. True to the sport’s heritage, his family’s legacy, and for the entertainment of thousands of grassroots racing fans across the globe.

“Just keep doing what I’m doing, trying to make the most of things. Probably the same goals, trying to win as many races and championships as possible. Just dominate.”