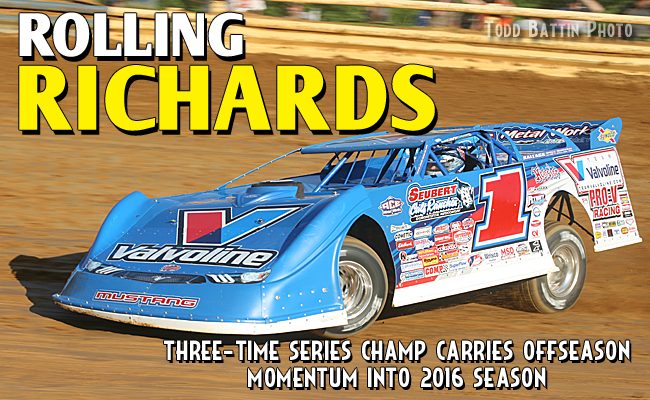 SYLVANIA, G.A. – Feb. 11, 2016 – Josh Richards has not claimed a Winter Freeze event at Screven Motor Speedway since 2013 and struggled at the DIRTcar Nationals at Volusia Speedway Park last season, but if the offseason has indicated anything, it will be that Richards will be a force to be reckoned with to start the season.

As the World of Outlaws Craftsman® Late Model Series gears up to take the green flag at Screven on Friday and Saturday, Richards has been hard at work preparing for the upcoming season by capturing two wins at Golden Isle Speedway in Brunswick, Ga., then winning twice at East Bay Raceway in Tampa, Fla.

“I couldn’t be more proud of my Valvoline team. We have all worked really hard over the off-season building this new car,” said the driver of the Rocket Chassis team car. “The XR1 Rocket Chassis has been great to drive. It’s been six years since I’ve been to Golden Isles Speedway and the track has changed a lot.

“It took me a little time to get it figured out, but I had a lot of fun racing with Brandon [Sheppard] and [Jonathon] Davenport. Those guys didn’t make it easy on us, we definitely had to earn those wins.”

Richards, who finished third on the lone night he didn’t win at Golden Isle, carried his momentum to East Bay, capturing the checkered flag in two of the three events, giving him four victories in six races leading into the start of the World of Outlaws’ season.

“It feels really good to have had such a great start to the year, I feel really blessed,” The Shinnston, W.Va. native said. “My hopes are high going into Screven, we’ve always run really well there…I’m really looking forward to going back this weekend.”

“We had a great start to the season going for us last year until we got to Volusia Speedway Park. We really struggled there for some reason, so that was our focus for this year. We tested at Volusia a few weeks ago and the car felt really good. I’m excited to go back and see how the new car handles in race conditions.”

Richards and his fellow competitors will have a tough task unseating Shane Clanton who dominated the event in 2015, winning all three Outlaws nights after building similar momentum to start the year.

As Richards rolls into the start of the 2016 Outlaws season, he looks to continue his momentum and capture his fourth series title.

Tickets for DIRTcar Nationals start at just $20 and are on sale now by calling 844-DIRT-TIX (347-8849), or by visiting http://www.DIRTcarNationals.com. Infield parking will be available on a first come, first served basis to all fans with a pit pass. The cost of the pit pass is $10 and will be available at the pit gate off of turn four.