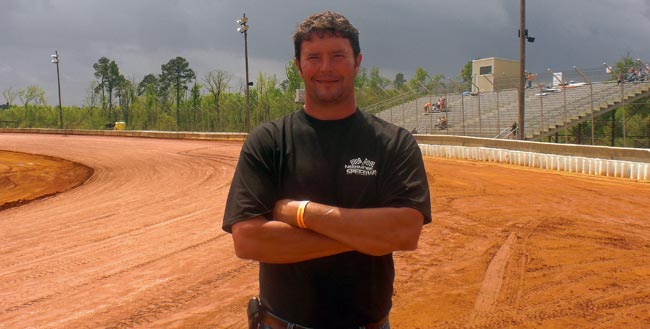 NORMAN PARK, GA – May 6, 2011 – All the stars of the World of Outlaws Late Model Series eyeballed Needmore Speedway for the first time a month-and-a-half ago.

But on Sun., May 8 – Mother’s Day, 2011 – the well-known full-fender travelers will finally get to race on the three-eighths-mile oval in southern Georgia.

Six weeks after the track’s inaugural WoO LMS event was postponed by rain, the national tour returns to the unique facility that Chris Hunnicutt built on a portion of the 700-plus acre farm where he cultivates peanuts and cotton. A 40-lap A-Main paying $8,000 to win will headline Sunday evening’s action at Needmore, which hosted its first race only last August.

Not a single WoO LMS regular has turned a lap at Needmore – well, aside from a few slow, exploratory tours around the speedway on their four-wheelers when they were there on March 27 for the tour’s originally-scheduled date. Hunnicutt and his staff made a valiant attempt to get the track surface run in for racing that evening following a mid-afternoon shower, but more precipitation arrived later, pushing the event to Mother’s Day.

Will having seen Needmore help the Outlaws figure out a setup upon their return? The general consensus it that it can’t hurt their efforts, but getting their cars tuned to the unfamiliar track will remain a guessing game.

“You still have to wait to get on (the track) before you can totally figure it out,” said Chub Frank of Bear Lake, Pa., a veteran driver who has followed the WoO LMS since its reincarnation under the World Racing Group in 2004. “You can look at it and at least say, ‘It looks like it’s a decent racetrack,’ but you don’t really know how it’s going to race until you get out there and get a groove in it.

“It’s real wide, I do know that,” the standout racer known as ‘Chubzilla’ added when asked about his first impression of Needmore Speedway. “It’s really round too, so you’re gonna be turning all the time. I can’t really think of anywhere we race that’s quite like it, so it will be interesting.”

Needmore’s layout didn’t look all that unusual to Clint Smith of Senoia, Ga., who, along with Shane Clanton of Fayetteville, Ga., faithfully represents the Peach State on the World of Outlaws circuit. The veteran driver, who lives less than three hours north of the track, pretty much thought he was at one of his old haunts as soon as he saw its layout in March.

“There’s a track right up the road from me, Cordele Speedway, that’s identical to it,” said Smith, who is hoping to snap a 111-race winless streak during this weekend’s WoO LMS doubleheader at Swainsboro (Ga.) Raceway (Sat., May 7) and Needmore. “I raced there local for two years, so I think I have an idea of what to expect. If they work on the surface probably halfway through the show, I think it’ll be O.K.”

Needmore’s track prep, of course, will be something the barnstorming drivers will watch with great intensity. With Sunday’s spectacular southern Georgia forecast calling for sunny skies and temperatures rising into the upper 80s, teams will be basing their technical decisions more on the prevailing conditions than what they learned from seeing the track’s shape earlier in the spring. Some pre-feature surface reconditioning work could be the determining factor in drivers’ performance.

“I don’t know Needmore, other than that it’s round and reminds me of Brushcreek (Motorsports Complex in Peebles, Ohio) a little,” said 2006 WoO LMS champion Tim McCreadie of Watertown, N.Y., who spent plenty of time looking over Needmore Speedway while watching Hunnicutt and Co. work the wet surface in March. “I think that if it didn’t rain out, I think we would’ve had a real good surface to race on. There was plenty of moisture in that track that day, and hopefully they’ll have it wet again when we go back.

“With southern tracks – especially when the weather starts getting warmer – you gotta get ’em wet, and maybe even a little rough, to make ’em race better. I’m all for a promoter digging the track up before the feature to get moisture back in it. As long as the promoter is open to at least a little bit of driver and series input to help make their racetrack better for the feature, we’ll put on a show for the fans.”

Hunnicutt is certainly ready to do what’s necessary to provide the racers and fans a memorable event. His track-prep equipment will be standing by throughout the biggest night in Needmore’s short history.

“We’re not afraid to work the track,” said Hunnicutt, who originally constructed the speedway as a practice track for his teenage son. “We want everybody who comes to see a great race with the Outlaws.”

The favorite to reach Victory Lane in Sunday’s A-Main just might be 2008 WoO LMS champion Darrell Lanigan of Union, Ky., who enters this weekend’s action riding a two-race win streak and with four victories in six starts on the ’11 tour. He missed the season-opening series event in February due to a medical issue, but he’s roared back with one of the most amazing early-season runs in WoO LMS history.

Considering how strong Lanigan has been this year, attacking a brand-new track shouldn’t be much of a problem for him. He just won a WoO LMS A-Main on April 29 at Hartford (Mich.) Motor Speedway in his first-ever appearance there.

“We’re pretty confident with our car wherever we go right now,” said Lanigan. “We have a real good baseline setup that seems to be working everywhere and we just tune it from there.”

Drivers expected to challenge the Outlaws at Needmore include Tony Knowles of Tyrone, Ga., Ivedent Lloyd of Ocala, Fla., and Tyler Ivey of Tallahassee, Fla.

Needmore Speedway’s gates are scheduled to open at 1 p.m. on Sunday and hot laps are slated to begin at 4 p.m.

General admission is $25 (children 10-and-under will be admitted free of charge), and pit passes will be $40. Fans and racers who were in attendance on March 27 can present their rainchecks and pit bands for entry.

Needmore’s local Limited Late Model, Super Street and Pure Stock divisions will also be in action during the evening.

Needmore Speedway is located at 1060 John Vickers Rd. in Norman Park, Ga. It sits less than eight miles off Interstate 75 and about 50 miles north of the Florida border.

More information on Sunday’s event is available by logging on to www.needmorespeedway.com or calling the track office at 229-769-5611.