Ready To Take On The ‘World’ 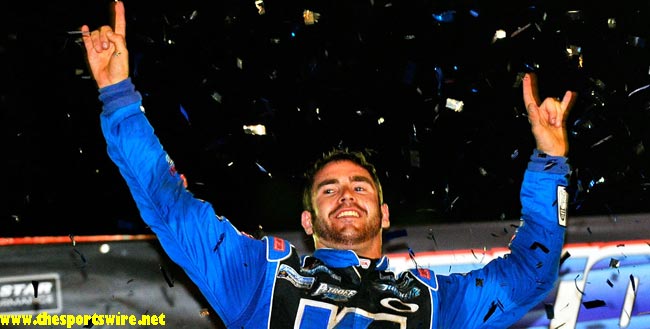 Richards Shoots For Another Crown-Jewel Victory This Weekend (Sept. 9-10) In World 100 At Eldora Speedway

But while that means the 23-year-old star from Shinnston, W.Va., no longer must answer the questions of when he’ll capture his first Big One, he still craves a victory in the division’s Biggest One – this weekend’s 41st annual World 100 at Eldora Speedway.

“Winning Cedar Lake (Speedway’s USA Nationals on Aug. 6) was obviously huge, but winning the World would be even more awesome,” said Richards, whose long-awaited breakthrough in a dirt Late Model major came in last month’s 100-lap World of Outlaws Late Model Series event at the Cedar Lake oval in New Richmond, Wis. “The World is our biggest race of the year and definitely the race I consider the toughest, so winning it would be the greatest feeling.”

Richards does admit that having the USA Nationals – a $50,000-to-win blockbuster – in his back pocket provides him a certain sense of relief as he prepares to chase the World 100’s $44,000 top prize. But the success isn’t changing his approach to Eldora’s DIRTcar UMP-sanctioned spectacular, which features time trials and non-qualifiers’ races on Friday night (Sept. 9) and heats, last-chance events and the 100-lap A-Main on Saturday evening (Sept. 10).

“It will probably be a little easier to focus on what you need to do,” Richards said of his mindset entering an event that attracts the most talent-laden field in dirt Late Model racing. “I guess there’s a little bit less pressure (after winning a crown-jewel). But at the same time, you want to win just as much as ever. Anytime you’re in a tight battle for anything your competitive nature comes out – like even though we won the World of Outlaws championship the last two years, we still want to win it a third time. There’s no less effort being put into it – actually, you probably put in more because after you get a taste of (winning) you want to win again and again.”

Finding the route to Victory Lane in the USA Nationals and the World 100 are also two distinctly different challenges. Yes, Richards got the crown-jewel monkey off his back at Cedar Lake – in his eighth season behind the wheel of a dirt Late Model – but there’s only so much from that performance he can translate over to the menacing Big E.

“Cedar Lake is really fast and short and there’s a lot of stuff going on there,” said Richards, whose only 100-lap triumph prior to the USA Nationals was a WoO LMS event in September 2010 at Mohawk International Raceway in Akwesasne, N.Y. “Eldora is just bigger and faster and has a different type of surface. Where Cedar Lake was more about saving your car in a hundred-lapper, Eldora is definitely more of a tire-conservation game.

“And track position is big at Eldora. If you slip up a little bit and lose your momentum, it could be bad. It’s hard to charge by cars and make up ground fast at Eldora unless you’re really, really good.”

Richards is confident that his Cedar Lake score signals he’s ready to take the next step at Eldora, a track he’s visited for its two annual majors since 2005 when, at 17, he became the youngest driver in history to qualify for both June’s $100,000 Dirt Late Model Dream and the World 100 in a first attempt. While his lone top-five finish in the two races is a fourth in the 2006 World 100, he’s been one of the most consistent qualifiers for both events over the past seven years; he’s missed the Dream starting field twice (’06 and ’08) and the World 100 A-Main just once (’08).

“I feel like we deserved to win that one (at Cedar Lake) – I felt real good about our chances going in there,” said Richards, who won the USA Nationals in his third career start. “I don’t know if it’s our time to win the World or not, but I feel real good about going there this year. Eldora is always a real crapshoot – you only get two or three hot laps, you have to qualify in the right spot, you have to get the right breaks in your heat and make the right decisions for the feature. We haven’t been able to pull everything together there yet, but I feel like this year might be our best shot yet to do it.

“I feel like our qualifying efforts (at Eldora) have been as good as anybody’s and we’re usually pretty good in the heats – that part we have going for us. We just have to get the feature conditions figured out to where we can pass a little better.”

Richards will bring a potent Rocket car from his father Mark’s racing stable to Eldora, where he’ll compete for the first time with a Roush-Yates Ford engine under the hood. He has plenty of momentum as well, with seven WoO LMS wins to his credit this season, including three in six starts since debuting the Roush-Yates powerplant one month ago.

“Our car’s been really phenomenal this year and the Roush-Yates Ford engine is really running good, so I feel good about our chances,” said Richards, who sits second in the WoO LMS points standings (28 points behind Rick Eckert of York, Pa.) with seven events remaining on the 2011 schedule. “I’m excited to get back there to Eldora. I feel like we’ve worked on a lot of things this year that have made us better as a team and our cars have gotten better. We just have to race smart, keep digging and hopefully we’ll figure out how to win there.”

Richards has certainly flirted with victory in the World 100, never more so than the 2006 edition when he was in the middle of a frenetic multi-car, late-race battle for the lead. He fell short, however, in what many observers consider one of the most exciting Worlds ever, finishing fourth largely, he said, because he was a green teenager still learning the ropes.

“Man,” said Richards, “every time I look back and watch that race (from ’06), I really feel that with the car we had – and knowing what I know now – we could have won the race. I moved to the bottom and made some moves, but I didn’t stay there like I should’ve. I don’t know if (eventual winner) Earl (Pearson Jr.) saw me or what, but him and everybody else starting moving down there to that little bit of brown and then they kept going right by me.

“I just wasn’t that good at moving down (to run the inside lane) at that point in my career. Not that I’m an expert now or anything, but I just feel like the race experience I have now would’ve made a difference in that race. Knowing your limits, knowing where to put your car to keep the guy behind you from sliding you – that just comes over time.

“I wish I could have that race back,” he added. “But ‘could’ve’ doesn’t count. We just have to go back and get it all done.”

Richards would love to finish the job this weekend – because in the final analysis, this could represent his final stab at the World 100 as a fulltime dirt Late Model driver. He’s currently in the middle of running an 11-race NASCAR Camping World Truck Series schedule in a Kyle Busch Motorsports Toyota and it’s possible that he’ll go pavement racing fulltime in 2012.

“We’ll see what the future brings,” said Richards, whose lone career Eldora victory came in a 2008 American Late Model Series event. “Right now I just want to do everything we can to win the World. With the atmosphere and prestige that race has, winning it would be second-to-none.”

Complete World 100 event and ticket information can be found on the track’s website at www.eldoraspeedway.com.

Additional info on all of the series, sanctioning and member tracks of DIRTcar Racing is available at www.DIRTcar.com.