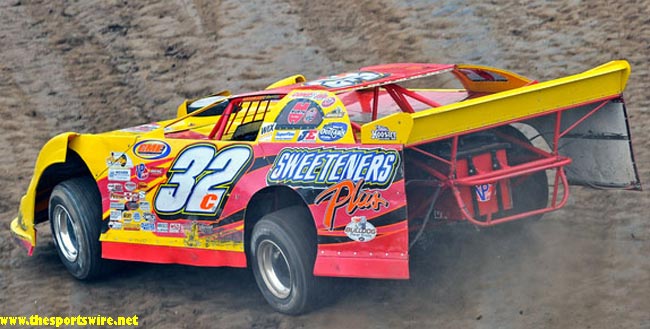 ELBRIDGE, NY – Sept. 20, 2011 – Vic Coffey’s greatest moments as a DIRTcar big-block Modified driver have come during Super DIRT Week. He’s hoping that this year’s edition of DIRTcar Northeast’s premier event will provide his crowning achievement behind the wheel of a dirt Late Model as well.

With the World of Outlaws Late Model Series headed to Rolling Wheels Raceway Park on Thurs., Oct. 6, for its first Super DIRT Week date since 2004, Coffey can’t help but feel that the stars might be lining up perfectly for his full-fender breakthrough.

Winless in 106 career WoO LMS A-Main starts with several near-misses dotting his performance record, Coffey is overdue for a victory – and the time and place for that milestone is in front of him. Rolling Wheels, of course, is familiar turf for Coffey, and Super DIRT Week – the annual showcase of DIRTcar Modified racing encompassing events at the one-mile New York State Fairgrounds in Syracuse, N.Y., and other nearby short tracks like the Wheels – has been very good to him.

“If it happens at Rolling Wheels, during Super DIRT Week, it would be really cool,” Coffey said when asked to consider the possibility of his coveted first-ever WoO LMS triumph coming in the 50-lap, $10,000-to-win event at Rolling Wheels. “It’s a track I’ve always gone good at, and it sure would be nice to win our first Outlaw show with all our family and friends there. That would be really special.”

Coffey, 40, of Caledonia, N.Y., knows what it feels like to celebrate on the high-profile Super DIRT Week stage with those closest to him. The only two Super DIRTcar Series big-block Modified victories of his career have come in the week’s – and the division’s – marquee race, the SEF Small Engine Fuel 200 Presented By Ferris and Snapper, a prestigious $50,000-to-win blockbuster at Syracuse’s famed ‘Moody Mile’ that this year is scheduled to take the green flag at 2 p.m. on Sun., Oct. 9.

Becoming just the fifth driver to win the SEF 200 at least three times in its 40-year history will once again be Coffey’s goal for Super DIRT Week 2011, but the addition of the satellite WoO LMS event at Rolling Wheels provides him a second focus. He’s concentrated this year on dirt Late Model racing like never before – while running the complete WoO schedule for the first time (he missed a handful of shows during his ’08 Rookie of the Year season), he’s made just three big-block Modified starts – and craves a triumph to give his full-fender pursuits a stamp of approval.

“It’s getting more frustrating to still be without an Outlaws win,” said Coffey, whose career-best WoO LMS finish is second, on Sept. 2, 2009, at Brewerton (N.Y.) Speedway. “Everybody keeps saying, ‘Hey, you’re running good, you’ll get one,’ but here we are now in the middle of September and I still haven’t got a win so you start looking back and thinking how you let a couple get away. That’s where the frustration comes from.”

Indeed, Coffey, who is ninth in the current WoO LMS points standings, has been in the mix for World of Outlaws glory several times over the past three seasons only to fall short. In 2009, he blew a tire while leading on the final lap at Fayetteville (N.C.) Motor Speedway and had a late-race caution flag cost him a likely victory at Brewerton. In 2010, he led the first 11 laps at Rolling Wheels before being forced to pit because his car’s radiator cap came off. This year he was knocked from the lead at Needmore Speedway in Norman Park, Ga., due to a tangle with a lapped car and was overtaken for the top spot by two-time defending WoO LMS champion Josh Richards of Shinnston, W.Va., late in a 40-lap A-Main at McKean County Raceway in East Smethport, Pa.

“The opportunities to win don’t come every day with this deal, so when you’re up front you gotta cash in,” said Coffey, who ran selected dirt Late Model events from 2001-2007 before increasing his participation in the division. “That’s why a race like Needmore was so hard to take. When you get a chance like that – the track’s rubbered up, you draw the pole, the car’s good, you get right out to the lead – they’re the ones you gotta get.”

Last year’s late-summer WoO LMS at Rolling Wheels ranks high on Coffey’s list of disappointments since it was “kind of a freak deal” that ended his bid. “That was the first time I ever lost a radiator cap,” he said. But the outing certainly provides him confidence for the tour’s first Super DIRT Week visit to the five-eighths-mile oval.

“I’m looking forward to going back there,” said Coffey, who rallied to finish 10th in the 2010 WoO LMS 50-lapper at the Wheels after pitting. “We were fast last year – I feel like we were fast enough to win – and we’re gonna go back with the same package. I’ll have my bigger cubic-inch motor in to run there, and hopefully the conditions will be the same and we’ll be good again.”

Rolling Wheels will be one part of a very busy week for Coffey and his Sweeteners Plus team, which will set up camp inside the expansive Syracuse Mile. He plans to drive cars from his operation’s stable in both the big-block Modified SEF 200 and the 358-Modified Nationwide Insurance 150 (a $20,000-to-win event scheduled for Sat., Oct. 8); practice starts at the big track on Wed., Oct. 5, with time trials for both divisions on Thursday afternoon, Oct. 6, and 20-lap heat races (three for big-blocks, two for 358-Modifieds) on Friday evening, Oct. 7.

The WoO LMS event will slightly change his usual itinerary for Super DIRT Week. He will bring his Modifieds to the Fairgrounds on Wednesday in a 48-foot enclosed trailer so his dirt Late Models can be hauled to Rolling Wheels in the Featherlite trailer they’ve been transported in all season. After Thursday’s action at the Wheels, he’ll likely drop his dirt Late Models for the remainder of the week at the Syracuse shop of his buddy Ernie Kreis, allowing his team to use the bigger, better-equipped rig during the Modified competition.

“We’re ready for DIRT Week with the Modifieds,” said Coffey, who won the SEF 200 in 2002 with help from other drivers running out of fuel and then repeated in 2007 with a convincing performance. “I’ve only run three Modified shows this year, but I don’t think that means much since Syracuse is such a different deal. We know what it takes to win there and hopefully we’ll have some luck on our side to do it again.”

Coffey will be one of three WoO LMS regulars pulling Late Model/Modified double-duty during Super DIRT Week, joining his Sweeteners Plus teammate Tim McCreadie of Watertown, N.Y., and Tim Fuller of Watertown, N.Y. McCreadie will run a Sweeteners Plus car in the SEF 200 and a Four-Star Racing machine in the 358-Modified event – he’s looking for his first career win in both Syracuse races – while Fuller, who won the SEF 200 in 2004, will drive for the Smith Brothers Concrete team in both races.

The WoO LMS event at Rolling Wheels on Thurs., Oct. 6, will be part of a gigantic doubleheader with the DIRTcar 358-Modified Series. Pit gates are scheduled to open at 4 p.m. and grandstand gates will be unlocked at 5 p.m., with race time set for 7:30 p.m.

Adult reserved seat tickets are available for $39 by logging on to http://dirtcar.ticketforce.com or calling 315-834-6606. Discounted student (ages 10-17) and children (9-and-under) pricing is available for reserved sections (children 9-and-under are free in General Admission seating).

Fans who purchase their reserved-seat tickets for the doubleheader by Sept. 23 will also receive a FREE pit pass, giving them behind-the-scenes access during their visit to Rolling Wheels.

Ticket information and details on all the action during Super DIRT Week, which runs from Oct. 5-9, is available at www.superdirtweekonline.com.