Race Week at a Glance – Another Trip Down South 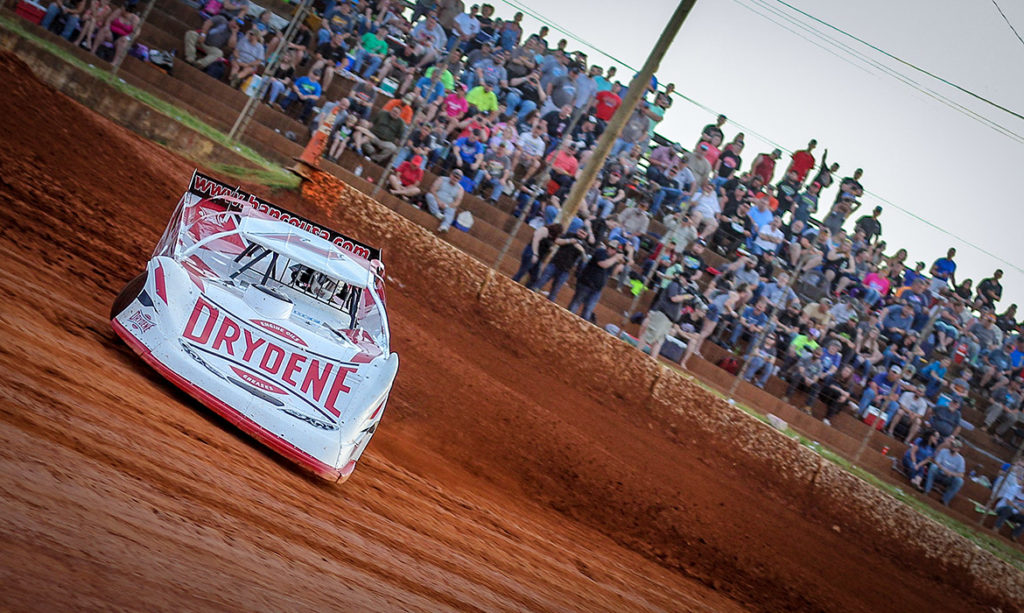 The World of Outlaws Morton Buildings Late Model Series takes on the challenge of two tracks new to the tour this weekend, first on Friday, May 31, at Cochran Motor Speedway and then Saturday, June 1, at Lancaster Motor Speedway.

Cochran fans are no strangers to Late Model racing, as the Georgia track is host to a Crate Late Model division regularly in addition to a few other regional series races. A semi-banked 3/8-mile, this configuration is quite similar to several tracks the Outlaws have already seen so far this season.

One driver in particular that has turned several laps at the facility is 2015 Series Champion, Shane Clanton. In his most recent visit, “The Georgia Bulldog” raced in and won a Limited Late Model race there, but the track has since changed a bit.

“With the Late Models, it gets pretty slick there, and now they’ve put the new dirt on it,” he said. “But in the videos that I’ve seen, it’s been awesome racing. Hopefully, they’ll have the track just right.”

Clanton already has one win in his home state of Georgia this season (Screven Motor Speedway on Feb. 9), and likes his chances to do it again this Friday.

“I think I’ll be good, since I’ve been there before and most people haven’t,” Clanton said. “Hopefully I can use that experience to my advantage.”

On Saturday, the Outlaws will turn their focus to what could be one of the most unique tracks on the schedule – Lancaster Motor Speedway in South Carolina. Known as a big, fast half-mile, even Series veteran and home-state Outlaw Chris Madden described it as “two drag strips with turns at the end of them.”

Madden and the rest of the full-time roster is projected to go up against some of the best in Late Model racing that the Southeast has to offer on Saturday, including (but not limited to) Chris Ferguson, Brandon Overton, Cla Knight, Johnny Pursley, Ben Watkins, Dennis “Rambo” Franklin, Jeff Smith, Anthony Sanders, Adam Yarbrough, Donald Bradsher and Derrick Ramey.

One fellow South Carolinian in particular that has given Madden and the rest of the Outlaws fits already this season (and very well could do so again this weekend) is the pilot of the Barry Wright Race Cars house car, Ross Bailes. He picked up a win in the Series’ most recent visit to South Carolina back on May 3 in dominating fashion, his first-ever World of Outlaws victory.

Another driver looking to piggy-back on some of that South Carolinian success and also pick up his very first World of Outlaws win is Lancaster’s hometown hero “Downtown” Michael Brown.

Brown will bring the Billy Hicks-owned, H&H Auto Sales, Kenny Lamb Race Engines, Hoosier Tire South, Penske Shocks, nobodywalksnc.com-sponsored ride into his home track on Saturday evening, riding on what could be the biggest wave of success his career behind the wheel on dirt has ever seen.

An employee of his family-owned transmission repair shop by day, Brown and his crew have been working hard each night in the race shop to get things prepared for their busy race schedule. This Saturday, Brown will pilot the familiar black-and-blue #79, the same car he brought to Cherokee Speedway back on May 3, where he suffered a broken brake rotor that forced his retirement from the race after just three laps.

But Brown has also had a boatload of success already this season behind the wheel of the Wesley Page-owned #32 Crate Late Model, with a whopping nine wins — three of which came just this past weekend at the Friendship Speedway (two on May 24, one on May 26) and another at The Dirt Track at Charlotte Motor Speedway on May 25. Three other wins came, as one would expect, at Lancaster in weekly Crate competition. On March 16, Brown swept the Late Model action entirely, winning both the Crate and Super Late Model features.

Needless to add, Brown has done quite well for himself so far in 2019. But he didn’t exactly get the result he was hoping for at Cherokee and is ready for redemption against a group of drivers that he said he learns quite a bit from each time he goes to compete against.

“You’ve definitely got to be prepared,” Brown said. “You’ve got to have tires cut up for these situations, and really have a game plan. That is probably the biggest thing that I take away from racing [against the Outlaws], it’s the preparation that they put forth to be ready.”

Just as Madden and Bailes faced at Cherokee earlier this month, Brown will have his friends and fans in attendance — the ones that support him all season long and are, no doubt, expecting a great showing against “The Most Powerful Late Models on the Planet.” Brown admitted this weighs on him a bit more than normal when the big guns are in town.

“It’s just the simple fact that they all expect you to run well,” he said. “To be able to compete on a national level at my home track, it definitely adds some pressure. You want to be able to perform and fulfill everybody’s expectations.”

Brown has won many races at Lancaster before, in multiple divisions. So, if there’s anyone with the know-how to maneuver around this near-superspeedway, it’s him. And his confidence level in he and his crew’s abilities reflects that.

“I definitely think that we have a shot,” Brown stated. “It’s definitely going to be a tough one. But if I make the right decisions in the race and things go my way, I feel like we could be there at the end.”

Come see Brown, Bailes, Madden, Clanton and the rest of the World of Outlaws’ supporting cast as they take on the locals at Cochran and Lancaster this Friday and Saturday, May 31 and June 1! Can’t make it to the track? Watch every lap LIVE on DIRTVision!

THIS WEEKEND AT A GLANCE

TICKETS
Tickets for both tracks can be purchased at the gate on the day of the event.

1/2-MILE WINNERS
There have been five races 1/2-mile tracks so far this year, four at Volusia Speedway Park, all won by Brandon Sheppard on February 13-16, and the fifth at Smoky Mountain Speedway on March 23, won by Jimmy Owens.

AROUND THE TURN
The World of Outlaws Morton Buildings Late Model Series next heads to Lernerville Speedway in Sarver, PA for the 13th annual Firecracker 100 on June 20-22.

2019 STATS
There have been 12 World of Outlaws Morton Buildings Late Model Series Feature events this season.

WHAT TO WATCH FOR: World of Outlaws CASE Late Models prepare to Gator Hunt at Volusia Speedway Park