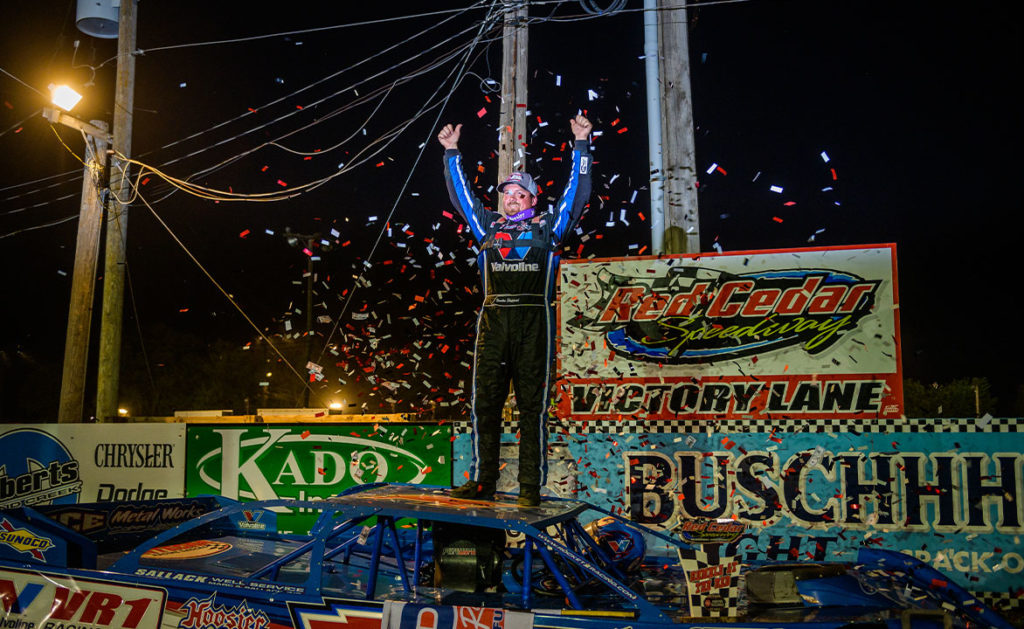 With the Rocket1 Racing team, the goal is the moon. When Brandon Sheppard was tapped to be the full-time pilot on the World of Outlaws Late Model tour in 2017, he made it there in record time.

The New Berlin, IL driver, became the second driver to win four Series championships in 2021—on the strength of eight wins, 34 top fives, and 43 top 10s.

He’s also one win away from tying Josh Richards for the most wins in World of Outlaws Late Models history.

With another full year ahead with Rocket1 Racing, “The Rocket Shepp” is on the cusp of history. He spoke about his time with the World of Outlaws so far and looks ahead to 2022.

You’re only the second driver in history to win four World of Outlaws championships. Did you ever think you’d reach this point in your career?

SHEPPARD: The goal was to win races and win championships when I first started to make a career out of it. So, to sit here and say that I thought I was going to do this already, you know that’s a big feat to do. I’m definitely thankful for Mark Richards and my dad and my grandpa for getting me started and just all of the opportunities I’ve had in my career that’s made it possible.

The 2021 title had a different look than in the past. While the wins weren’t coming, your team was still consistent every race.

SHEPPARD: Consistency is what wins championships. But at the end of the day, our goal is to win races, and the championship is going to fall where it falls. We definitely have high hopes this year of winning some more races and getting back on track as far as that goes.

Were there any adjustments you had to make on the way to the championship?

SHEPPARD: Man, we’ve just been working really hard on the car, and Mark (Richards) and Steve (Baker) and everybody at Rocket Chassis have been putting in the time and effort to get these things back on top. We’ve got a really good racecar coming into the start of the season, so we’ll see.

Your closest rival last season was Chris Madden. What was it like racing against him on the way to the title?

SHEPPARD: Madden, he’s a really tough competitor. He’s a great guy; we’ve become friends throughout the past few years here. It’s a lot of fun racing with him; we’ve raced really clean together, and like I said, he’s just one of the toughest competitors out there. He’s going to be tough again this year.

What would you say was your favorite win of 2021, and why?

SHEPPARD: Right off the top of my head, I can’t even think of one that really sticks out more than the other one. They all just mean so much to me and the team any time you can get a win. To win Outlaws races is our goal, so none of them really stick out more than the other because our goal is to win every night. It’s just a privilege to drive this (Rocket) house car, so any win that I get means a lot to me.

For more on Sheppard’s quest for a fifth championship, check out our 2022 World of Outlaws Late Models program online, or when the Series comes to a track near you.

Sheppard will continue his “drive for five” championship season at Volusia Speedway, Feb. 16-19, during DIRTcar Nationals.