Punching the Clock for the Working Man 50 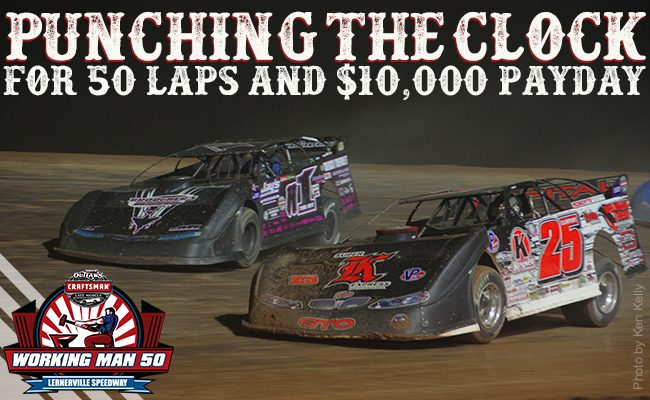 During last year’s event, Mars defeated 2016 Champion Josh Richards after the former Rocket 1 driver had led 64 laps of the 75-lap finale. Richards was sidelined by a flat right-front tire and ultimately surrendered his lead to eventual winner, Mars.

Clanton is the only current Outlaw driver who could pull off a repeat win during the 50-lap Working Man event on September 2. Clanton looks to repeat his past success at Lernerville Speedway in hopes of catapulting his Capital Racecar to second in Series points by the end of the season. He currently sits only 50 points behind Chris Madden, placing him third in the points race.

“I am always looking forward to going to Lernerville,” said Clanton. “Hopefully we will be a little better than we were at the Firecracker. Normally the track is a little slicker. Normally, you can run top to bottom, but we were pretty much married against the cushion since it was so wet [from the rain]. Hopefully it is a little drier and we can run all over the track.”

Other drivers looking for a win at the 4/10-mile include current Series points leader Brandon Sheppard, who has won 14 races so far this season, including a victory at Lernerville Speedway during the Firecracker matinee event earlier this year.

Additionally, Morgan Bagley tied a career best finish of second place during the 2016 Working Man event. As a Series regular since 2013, Bagley is looking to finish one position ahead of last year to land his first-ever Outlaw win at Lernerville Speedway.

Get more information on the upcoming World of Outlaws Craftsman Late Model Series event at Lernerville Speedway on September 2 by visiting the Series website. Buy advanced tickets for the Working Man 50 today.