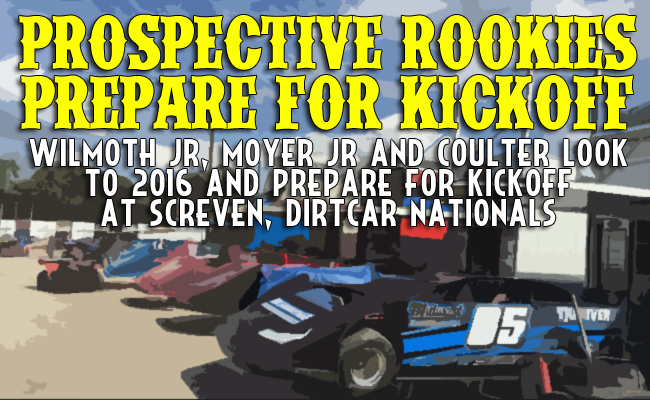 CONCORD, N.C. – Jan. 30, 2016 – Paul Wilmoth Jr., Joey Coulter and Billy Moyer Jr. join a growing list of drivers planning to compete at Screven Motor Speedway’s Winter Freeze VI, Feb. 12 and 13, in hopes of battling for the 2016 World of Outlaws Late Model Series title, as well as 2016 Rookie of the Year.

Wilmoth, a veteran driver, has a career that started in 1989 has seen a lot of firsts for the West Virginia native, but 2016 will mark his first time competing with the World of Outlaws.

“I think the World of Outlaws Late Model Series is going to fit my schedule really well and that’s why we decided to go that route,” Wilmoth said. “I’ve been wanting to do it for years, I’ve just never had the opportunity or funds to do it. This year it all worked out and I think it will be good for us.

“My main objective is to run the whole season and try to finish every race and every lap. When you finish races you have better chances of winning races. So the main goal is to run well and put all the laps together.”

The 27-year veteran, nicknamed “The Gambler”, is the owner of more than 200 career A-main victories across West Virginia and neighboring states. Even though his experience spans two decades, 2016 is Wilmoth’s first full season on the World of Outlaws Late Model Series tour.

“I’ve wanted to do this for a long time,” Wilmoth Jr. said. “I’m excited to have the opportunity to run the season this year and do it on the level you need to in order to be competitive. Having the Bloomquist cars, two new engines and the equipment we have is exciting.”

Joey Coulter is a name a lot of racing fans may recognize. Coulter has competed in the NASCAR Camping World Truck series for the last four years while also making NASCAR Nationwide Series starts during that time.

Coulter began his racing career in 1998 racing primarily on asphalt tracks before moving up to the ARCA Racing series in 2009, then to NASCAR in 2011.

For the 2016 season Coulter will be making the move to dirt. Even with little dirt experience, Coulter admits he enjoys the challenge, which has sparked his interest in joining the World of Outlaws Late Model Series.

“I am super excited. This is going to be a first for me and my family race team,” said Coulter, a Florida native. “We have ran Coulter Motorsports for a long time, but mainly on pavement. Then a couple years ago, my mom decided to grab the bull by the horns and get us into dirt racing.

“As things progressed on the dirt side, my NASCAR stuff started to diminish, so we decided to make this move serious. Now we have Rum Runner Racing and we are going to give this World of Outlaws thing a shot.”

The 25-year-old Coulter, who in the offseason has decided to pursue a college degree at the University of North Carolina at Charlotte, has also been testing in Florida for the 45th Annual DIRTcar Nationals at Volusia Speedway Park, which begins right after Winter Freeze VI.

“We have a lot to learn, and we are in a position to learn it with help from Mark Richards and Rocket Chassis,” Coulter said. “I probably still haven’t run 100 races total yet on dirt. The world of dirt is still new, but it is so cool the way the fans are involved. Being in NASCAR and now on dirt, I can say the hardcore racing fans go to dirt racing and it’s amazing.”

Another name that will sound familiar to racing fans is Billy Moyer Jr. Moyer Jr. is the son of legendary dirt track star Billy Moyer, who has amassed 44-career victories in the World of Outlaws Late Model Series.

The younger Moyer has decided to follow in his famous father’s footsteps and will make an attempt at the 2016 Rookie of the Year title, while also battling for the series championship.

“We’re going to start the World of Outlaws thing and see how it goes,” Moyer said. “We’re going to head to Screven and Volusia, and hopefully things go well enough there that we can make a run at it.

With Screven Motor Speedway in the crosshairs, Paul Wilmoth Jr., Joey Coulter and Billy Moyer Jr. look to make the World of Outlaws Late Model Series 2016 season one for the record books.