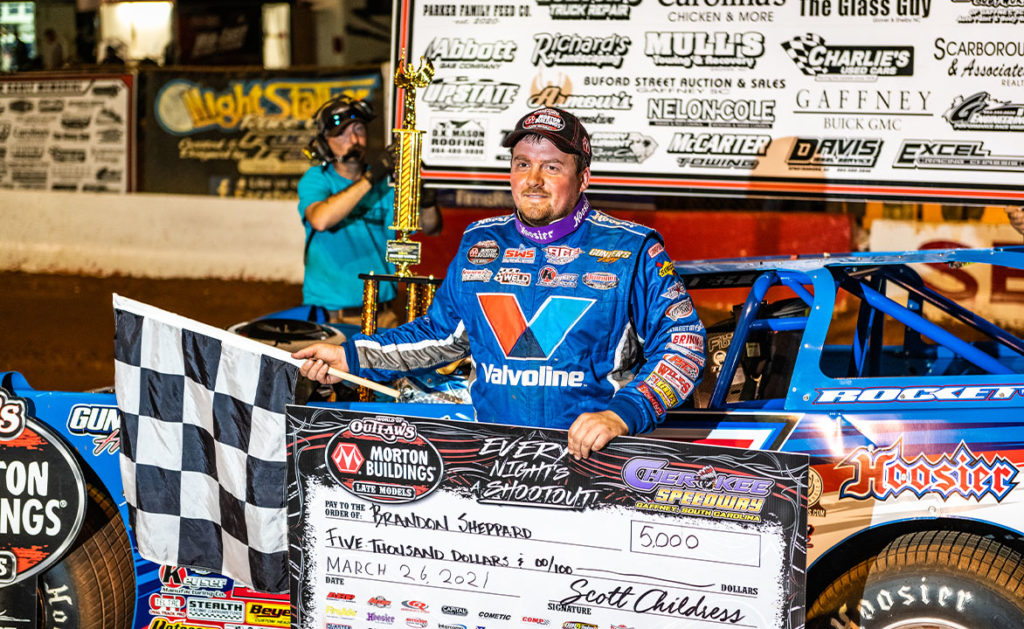 Getting that elusive first victory of the season can be one of the hardest things to do in all forms of motorsports.

Three-time defending World of Outlaws Morton Buildings Late Model champion Brandon Sheppard knew that all too well. He went six races without a win – the longest he’s gone without a win to start the season with the Series.

He broke that streak at Cherokee Speedway during a special 25-lap event. However, with the Cherokee race being a special event, the victory doesn’t count toward his win totals, which still sits at 69 World of Outlaws wins.

The win does give the New Berlin, IL native some momentum as he heads back home for the Illini 100 at Farmer City Raceway this weekend, where he’ll hope to finally, officially, get his 70th career win.

“We didn’t get that race in last year, and it’s one I really look forward too,” Sheppard said about the Illini 100. “It’s just going to be nice to get back home, someplace I’m familiar with.”

Before Sheppard’s win at Cherokee last Friday, the results weren’t coming in as much as he hoped. Heading into that event, the “Rocket Shepp” still hadn’t finished in the top-five.

Despite the tough start, he still sits second in the points standings, 66 points behind Kyle Strickler. Sheppard said he’s in a good position as the meat of the Series schedule begins.

“We’re really excited to get going into the grind of the year, and hopefully get our consistency back, and rattle off a few wins,” Sheppard said.

While the optimism to get that consistency back is there for the Rocket1 Racing team, Sheppard knows how tough it’ll be to stay consistent throughout the season.

“The competition is really high, and it makes it tough. But it’s a lot better when we’re racing night-in and night-out,” Sheppard said. “It makes it a lot better for the team, and we get a good rhythm going.”

The Illini 100 is the second straight weekend of big payouts for the World of Outlaws Morton Buildings Late Models. The Saturday event at Cherokee Speedway that was postponed would’ve paid $40,000 to win.

For Sheppard, the money is great but a morale boost for the team may be more important.

“We’re not getting the consistant finishes we’ve gotten in the last few years,” Sheppard said. “I don’t think we’re far off, we’re right on the verge, give us another couple of weeks and we’ll be back in Victory Lane.”

Even though Sheppard has had success at Farmer City Raceway, it won’t be easy to keep his consistency going.

Along with the World of Outlaws Late Model Series regulars, he’ll have to contend with several drivers from Illinois, including Bobby Pierce, Shannon Babb and Brian Shirley.

Shirley and Sheppard battled during the final stages of night one of the 2019 Illini 100. Shirley won that race, but Sheppard won the 75-lap finale.

If Sheppard can match that win from 2019, the Illinois driver will have his 70th career Series win. That means he’d only be seven wins away from tying Josh Richards for the most all-time wins.

Hot Laps are scheduled for 6pm (CT) on Friday, and 5pm (CT) on Saturday. For tickets to the event CLICK HERE.

Fans can also meet some of the drivers during an autograph session Saturday from 3pm (CT) to 4pm (CT).

REACHING THE PEAK: Sheppard Holds Off Erb at Atomic, Ties Richards for Most World of Outlaws Wins