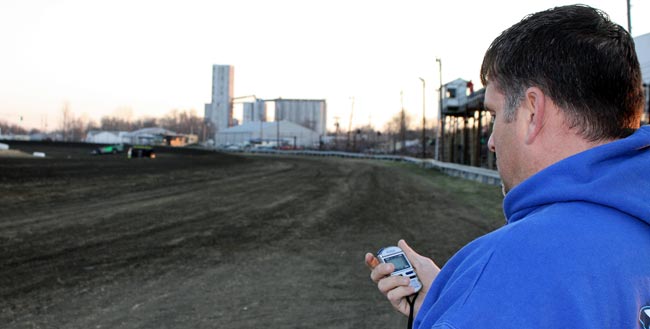 A total of 29 dirt Late Model drivers participated in an open practice session to kick off the blockbuster World of Outlaws Late Model Series weekend, which features Ohlins Shocks Time Trials and heat races on Friday night (April 5) and Last Chance Showdowns and the 100-lap A-Main on Saturday evening (April 6).

Among Thursday night’s hot-lappers were all three former winners of the Illini 100 – Billy Moyer of Batesville, Ark. (2008, ’10), Shane Clanton of Fayetteville, Ga. (’09) and Jimmy Mars of Menomonie, Wis. (’12) – and more than two dozen other racers hoping to join them on the event’s victory list.

No entrant in this weekend’s action craves a triumph in the Illini 100 more than Babb, a two-time race runner-up and the only driver to finish among the top five in all four editions of the event. He was nipped at the finish line in heartbreaking fashion by Moyer in 2008 and ’10 and placed fifth in ’09 and third in ’12.

Babb, 39, admitted after his practice laps around the quarter-mile oval that he has plenty of room for improvement, but he was certainly upbeat about the weekend to come.

“It feels good to get back here and race,” said Babb, who spent his formative years in the dirt Late Model division competition regularly at Farmer City. “This is a racetrack I could race at every night of the week. I love this place, so it would be a blast to be the first driver from Illinois to win this race.

“We’ll have some work to do tomorrow,” he continued. “Tonight was some of the first laps the track’s had on it all year and it was pretty brutal, pretty hard to hold on to. I don’t think it’ll be like this tomorrow, so instead of changing a bunch of stuff and chasing it all night, I think we’ll wait till they work on the track again and we’ll work on our car too.”

Birkhofer, 41, is just one stroke of misfortune – his run-in with a turn-four rut that knocked him from the lead midway through the inaugural Illini 100 in ’08 – from owning four career top-five finishes and perhaps even a victory. Aside from his 20th-place finish in ’08, he’s run second (’09), fourth (’10) and fifth (’12).

The well-known Hawkeye State star didn’t end Thursday night’s practice session with a warm, fuzzy feeling about his chances for breaking into Victory Lane, however.

“Right now, I couldn’t be any further from trying to win this one,” conceded Birkhofer. “What we do nowadays, our car’s not really keen on these (rough) conditions (which prevailed on Thursday). We gotta step back a little and make some changes.

“Hopefully they’ll make the track a little better tomorrow – which I think they will because, I mean, there was snow on the ground here a week ago, so it’s gonna take a little bit to get slickened off – and we’ll make our car a little better too.”

The 25-year-old Richards, meanwhile, noted that Thursday’s hot laps were run on a quarter-mile oval that was “pretty intense” but pronounced his evening a success.

“We tried some things, and the longer the night went, the better we got,” said Richards, who enters this weekend’s program leading the WoO LMS points standings. “We’re not exactly where we wanna be, but we had a positive test. We learned a lot and now I feel better starting tomorrow versus if we didn’t have practice tonight.”

“We’ve always run well here, but we haven’t been able to capitalize on anything in the feature to get a win,” said Richards. “This has always been a fun racetrack for me, but it’s also one that always eluded me. Hopefully we can finally get our car right and get a win here.”

The Illini 100 weekend also includes a 50-lap, $5,000-to-win UMP Modified show (heat races on Friday, B-Mains and A-Main on Saturday) and competition for Farmer City’s weekly support classes. The DIRTcar UMP Street Stocks and Hornets will run complete programs on Friday, and the Street Stocks will return on Saturday to battle in another regular racing card.

More information on the Illini 100 at Farmer City Raceway is available by logging on to www.farmercityracing.com.