Points Battle Heads To The Wheels 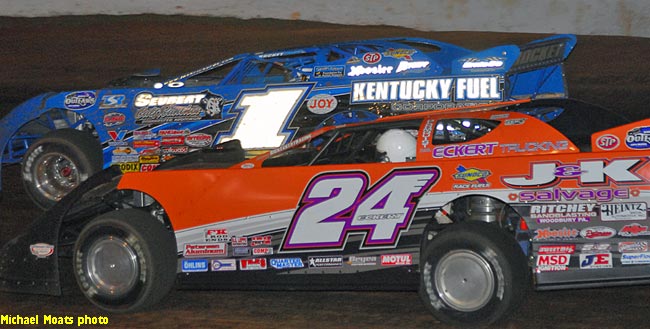 CHASE HEATS UP: Rick Eckert has finished second in both of his previous World of Outlaws Late Model Series starts at Rolling Wheels Raceway Park. Josh Richards has struggled in his two visits to the five-eighths-mile oval.

So does that spell Advantage, Eckert, in the battle for the 2011 points championship when the national tour returns to Rolling Wheels on Thursday night (Oct. 6) for a 50-lap, $10,000-to-win event during the Northeast’s racing spectacular known as Super DIRT Week?

Eckert, 45, of York, Pa., won’t go that far. The current WoO LMS points leader knows the trend lines at the Wheels clearly favor him, but he’s also a veteran driver who understands that past performance isn’t always the biggest factor in a race’s outcome.

“Rolling Wheels has been pretty good for us,” said Eckert, who owns runner-up finishes in both the 2005 and 2010 WoO LMS A-Mains at the central New York facility. “We’ve had some success there so that gives us some confidence, but you never know what can happen when you go back to a place. Josh is on a pretty good roll right now so we’re gonna have to step it up if we want to hold him off.”

Richards, a 23-year-old sensation from Shinnston, W.Va., is seeking his unprecedented third consecutive WoO LMS title. He leads the ’11 tour in wins (eight), top-five finishes (23) and earnings ($186,635), but he sits second in the points standings, trailing Eckert by 16 points with five crucial events remaining on the schedule.

Eckert has led the points standings since early May, parlaying two wins and a remarkable level of consistency (14 top-fives and 23 top-10s — with no finish worse than 16th – in 28 events) into a bid for his first-ever WoO LMS points crown. But Richards, who has three finishes of 16th or worse, has been pecking away at Eckert’s points advantage, slicing his deficit from 60 to 16 points over the past five races.

Richards has scored all eight of his ’11 wins over the last 18 A-Mains – a hot streak very reminiscent of Eckert’s scorching eight wins in 17 starts during the first half of the 2006 season – and has captured four of the last six tour events. But if he’s going to roll on with his pursuit of Eckert this Thursday night he’ll have to flip his history at Rolling Wheels, a track that hasn’t provided memorable moments for the young charger.

In Richards’s first appearance at Rolling Wheels, as a WoO LMS rookie in 2005, he used a provisional to start the A-Main and finished a quiet 11th. His visit to the Wheels in August 2010 was even rougher; while he finished a respectable eighth in the headliner, he had to hastily jump into his backup car for time trials after damaging the nose of his primary machine during hot laps and then – after returning to the seat of his repaired primary car – he dropped out of his heat because he again bent his mount’s nosepiece.

“Rolling Wheels last year was frustrating for me,” said Richards. “We knocked two nosepieces off, had two cars unloaded, ended up taking a provisional. We salvaged the night with a top 10 and got a few points, but it was a real tough night.

“I’m excited to go back to Rolling Wheels because I do like the place, but hopefully we won’t have a night like we had last year again.”

Richards knows he’s running out of races to overtake Eckert, but the race for the $100,000 points title isn’t going to change his strategy.

“We’re not really worried about points right now,” said Richards, who can tie the WoO LMS single-season victory record (Scott Bloomquist’s nine in 2004) with a triumph at Rolling Wheels. “You do kind of have them in the back of your mind, sure, but we go in to every race each and every week trying to win. We’ve been pretty successful for the past few months and won quite a few races so we have that momentum going for us.”

BUSY DRIVERS: Thursday’s program brings the WoO LMS back to Super DIRT Week – the annual showcase of DIRTcar Modified racing encompassing action at the one-mile New York State Fairgrounds in Syracuse, N.Y., and other nearby short tracks like the Wheels – for the first time since a weekend event in 2004 at Fulton (N.Y.) Speedway.

The midweek show, which will run in conjunction with a Mr. DIRTcar 358-Modified Series event, sets up a heavy racing schedule for three WoO LMS regulars with roots in the Northeast’s DIRTcar Modified division. New Yorkers Tim McCreadie, Tim Fuller and Vic Coffey will pull double-duty, competing not only in Thursday’s full-fender action but also in the open-wheel DIRTcar Modified competition at the famed Syracuse Mile. The big track hosts the Big-Block Modified division’s 40th annual SEF Small Engine Fuels 200 Presented By Ferris and Snapper on Sun., Oct. 9, and the Nationwide Insurance 150 for 358-Modifieds on Sat., Oct. 8, with qualifying for both event scheduled for Thurs., Oct. 6 (time trials during the afternoon) and Fri., Oct. 7 (five 20-lap heat races during the evening).

McCreadie and Coffey will be teammates under their familiar Sweeteners Plus Racing banner in Syracuse’s Big-Block Modified wars. Coffey, who won the SEF 200’s $50,000 top prize in 2002 and 2007, will also run a Sweeteners Plus car in the 358-Modified class; McCreadie, who has finished as high as second in both the SEF 200 and Nationwide Insurance 150, will drive a 4-Star Racing machine in the 358-Modified bracket at Syracuse and in Thursday’s undercard at Rolling Wheels.

Fuller, who won the SEF 200 in 2004, will compete in both Syracuse events for the J&S Racing team.

The trio will sign in at Rolling Wheels on Thursday after spending the afternoon practicing and qualifying at the Syracuse Mile. They all have competed in both previous WoO LMS events at the Wheels, with Fuller scoring finishes of fourth (’10) and 13th (’05); McCreadie placing ninth (’10) and eighth (’05); and Coffey registering finishes of 10th in ’10 (after leading the first 11 laps until he was forced to pit because his car’s radiator cap came off) and 22nd in 2005.

DRIVER TO BEAT: Darrell Lanigan of Union, Ky., stood in the spotlight the last time the WoO LMS invaded Rolling Wheels, rolling to victory in the August 2010 event. He inherited the lead when Coffey pitted and never looked back.

A seven-time winner who is currently third in the WoO LMS points standings, Lanigan can match Richards for top-victor status on this year’s tour with a triumph on Thursday night.

FRESH EQUIPMENT: Chub Frank of Bear Lake, Pa., who won the inaugural WoO LMS A-Main at Rolling Wheels in 2005 with one of the most dominant performances in tour history (he lapped all but the second- and third-place finishers), will bid for another checkered flag on Thursday night behind the wheel of a brand-new Rocket car.

The 49-year-old Frank, who since the last WoO LMS event on Sept. 17 scored a $13,000 triumph in a ULMS show on Sept. 24 at Pennsylvania’s McKean County Raceway, spent the past week putting the finishing touches on his new mount. The car will be powered a Roush-Yates engine, the brand he began campaigning last month.

TOUGH PLACE: Rolling Wheels hasn’t been kind to Clint Smith of Senoia, Ga., the only WoO LMS regular who has entered both previous tour events at the track but failed to record even a single top-10 finish. He placed 16th in 2010 and 17th in 2005.

But while the quintet haven’t experienced Super DIRT Week’s charged racing atmosphere, Rolling Wheels will be new territory for only Doar (the tour’s Rookie of the Year points leader) and Lobb. Clanton entered both previous WoO LMS events at the Wheels (15th in ’10/ninth in ’05); last year Hubbard placed 11th and Davies was 13th.

Lobb will actually bring two entries to the track in his Kennedy Motorsports hauler. His chief mechanic, Ross Robinson of Georgetown, Del., has one of his own dirt Late Models stored alongside Lobb’s equipment and will get a chance to run it at the Wheels.

ROLLING WHEELS EVENT INFO: Pit gates are scheduled to open at 4 p.m. and grandstand gates will be unlocked at 5 p.m. Race time is set for 7:30 p.m.

Adult reserved seat tickets for the WoO LMS/Mr. DIRTcar 358-Modified doubleheader are available for $39 by logging on to http://dirtcar.ticketforce.com or calling 315-834-6606. Discounted student (ages 10-17) and children (9-and-under) pricing is available for reserved sections (children 9-and-under are free in General Admission seating).

SUPER DIRT WEEK INFO: Ticket information and details on all the action during Super DIRT Week, which runs from Oct. 5-9 at the Syracuse Mile, is available at www.superdirtweekonline.com.