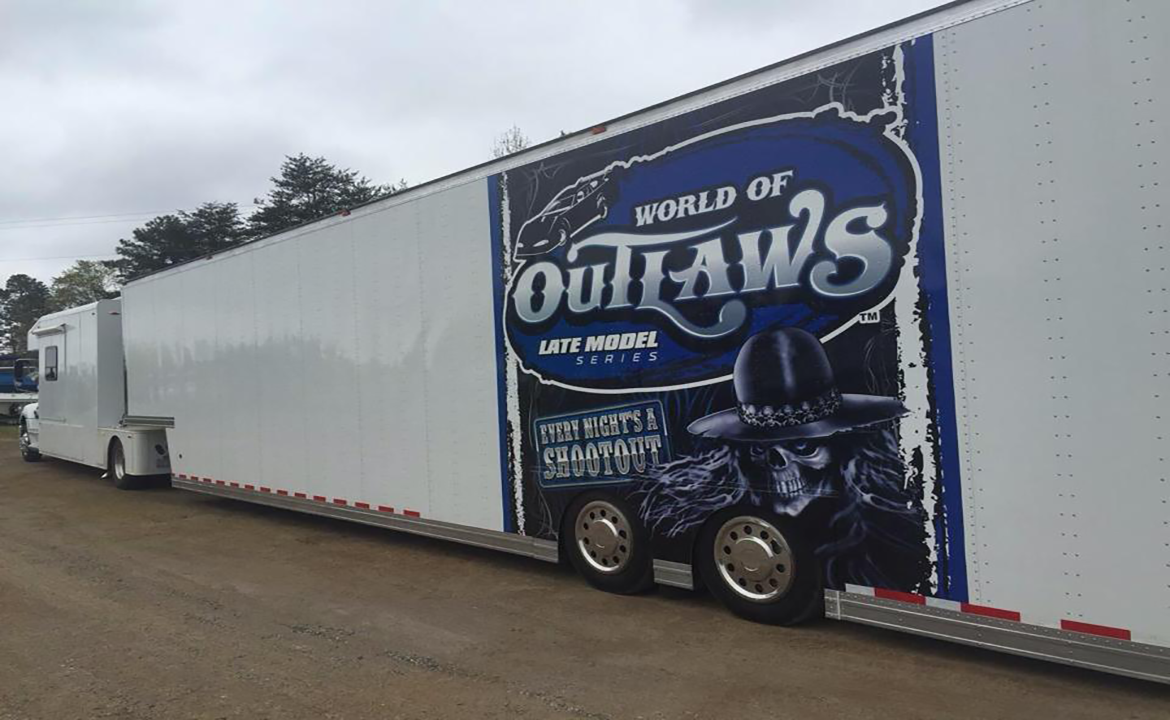 Seems like yesterday, but the reality is that it was now almost seven years ago. Lying in a hotel bed midmorning in Omaha, Nebraska on July 20, 2013 I received a phone call, which changed my career trajectory.

An unfamiliar number with a Georgia area code displayed on my caller ID, and I contemplated not answering it. Honestly, I just figured it was probably a spam call. However, something in my mind told me to take it, so I did.

On the other end of the call was World of Outlaws (WoO) Morton Buildings Late Model Series director, Tim Christman. The veteran of the racing world informed me that the series announcer had unexpectedly departed his role. He went on to ask if I’d be interested in taking over the position starting with the following weekend’s Prairie Dirt Classic at Illinois’ Fairbury American Legion Speedway.

Of course, I immediately accepted the offer. After all, this seemed like a chance for me to progress my announcing career, which had begun eight years earlier.

And so, the next phase was set in motion. I spent the next two-and-a-half years on the dusty trail with the Outlaws. Late-night stories, great racing, trials, tribulations, and more all dotted my landscape until the end of the 2015 season, when the demands of my small business pushed me to make the tough decision to end my tenure.

With this stage set, I now embark on a series of articles. There could be one. There could be 10. I don’t want to lockdown the number in the series. Rather, I’m going to pin these articles as worthy ideas come to mind.

Oh, You Fancy
Anybody, who’s ever worked for a national series, will likely tell you that a lot of the travel and accompanying logistics are made on the fly. So many different factors can impact it from weather to delays to scheduling changes. As a result, there’s many a times when hotels are booked last minute.

On one fateful night in Michigan, this last-minute planning bit me in the ass.

WoO series director, Tim Christman, and I were travel buddies. Wherever we were racing, we flew into the same airport. He got the rental car and the hotel for both of us on his expense account. His benevolence came under one condition. I had to do all the driving, because to put it blatantly, he hated driving.

This arrangement saved me a ton of money as an independent contractor. Furthermore, I didn’t mind driving, and it kept me from worrying about making hotel bookings. Sometimes he booked the hotel the week of the race, but a lot of times we just found hotels on the road after the race.

Rarely, was there a problem, but on one occasion it became a big issue.

On August 23, 2014, following an event at Michigan’s Merritt Speedway, Christman and I quickly came to the conclusion we had a problematic situation. Every single hotel we called between Merritt and the airport in Grand Rapids was booked solid. As it turned out, that particular weekend was college orientation at universities throughout the state, and families of soon-to-be freshman had filled up every available room.

While Tim and I didn’t really need sleep since we had a 6:00 a.m. flight out of Grand Rapids, we were in bad need of showers. Driving across Michigan at 2:00 a.m., covered in a layer of sweat and dust, we discussed options.

I mentioned, maybe stopping at state park to use their shower house. Tim was against this because he thought it sounded like the start to a slasher movie. He then offered a suggestion.

“Why don’t we just take a shower at a truck stop,” he declared.

“Surely, you are joking,” I quickly quipped.

As it turned out, he was not joking, as he quickly dialed the GPS into a Pilot Truck Stop at an upcoming exit.

Upon walking into the truck stop I was greeted by quite the interesting lady at the front counter. Explaining the situation, she graciously allowed us to go and scope their facilities. It was far from the ideal situation, but I ultimately concurred with Tim that it was better than getting on an airplane filthy.

After going back to the car to get our stuff, we reentered the truck stop, and that’s where the comedy began. The lady behind the counter was like a shark smelling blood in the water as she grinned at me.

She said, “Oh, you fancy with your khaki pants and your roller luggage coming into my truck stop to take a shower. I’m guessing this is your first time.”

In retrospect, I had already profiled her, so I guess it was only fair that she was profiling me. However, at the time it felt like salt in the wound.

While I was left to ponder the situation, Tim couldn’t stop laughing. After ensuring no less than five times that the shower door was deadbolted, I quickly cleaned up and changed clothes. Less than two hours later I was boarding plane bound for my home in Memphis.

It’s one of a thousand memorable experiences I had on the road with the World of Outlaws, and definitely one that I know I won’t soon forget.

Take care everybody. I’m sure I’ll be back soon with another reflection from the road.