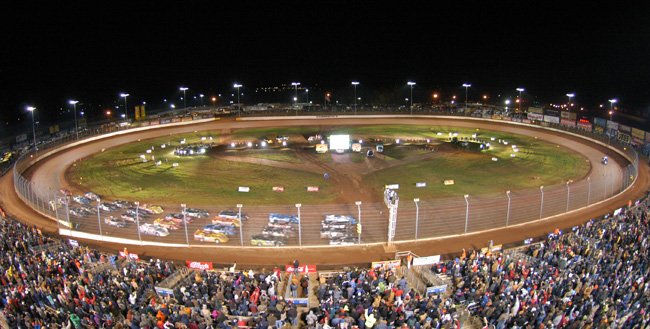 Season Ends With Spectacular Weekend Nov. 1-3 At The Dirt Track At Charlotte

JUST WIN, BABY: Rick Eckert has experienced a full range of emotions while at The Dirt Track at Charlotte for the PEAK Motor Oil World of Outlaws World Finals Presented by NAPA Auto Parts – everything from the depths of despair (in 2009 when he learned that his longtime car owner, Raye Vest, had passed away) to the heights of exhilaration (last year when he won his first World of Outlaws Late Model Series title in dramatic fashion).

So what’s in store for Eckert when he sets up shop at The Dirt Track for the sixth annual PEAK World Finals Presented by NAPA this week (Nov. 1-3)? With no chance of repeating as champion but a second-place finish in the points standings assured, he would like a stress-free weekend topped by at least one season-ending win.

Eckert, 46, of York, Pa., seems well positioned to end 2012 on a high note during the PEAK World Finals Presented by NAPA, which features 50-lap, $10,000-to-win WoO LMS A-Mains on both Friday (Nov. 2) and Saturday (Nov. 3) evenings. He’s riding a two-race win streak on the national tour, including his first career victory at The Dirt Track just three weeks ago, on Oct. 10, in the Circle K World of Outlaws Late Model Showdown.

“We’ve picked up some momentum here lately so hopefully we can build on that,” said Eckert, whose five WoO LMS wins this season ranks second to the record-setting 15 recorded by presumptive ’12 titlist Darrell Lanigan of Union, Ky. “I finally got Charlotte off my bucket list (with his recent triumph), but I’d still like to get another one before the year is done.”

Eckert’s best World Finals finish is second, in the first half of the 2010 doubleheader. That A-Main was run on Saturday afternoon after action on Friday night was postponed by rain.

This weekend’s competition will bring back Eckert’s memories of his raucous 2011 championship celebration at The Dirt Track, which came after Josh Richards of Shinnston, W.Va., slowed with a flat tire on the final lap of Saturday’s A-Main to hand the WoO LMS crown to Eckert.

“That was a cool moment,” said Eckert. “The way it happened, with all those people there and going crazy when we got to Victory Lane, was something you never forget. I can’t believe it’s already been a year since we did it.”

Eckert trails Lanigan in the WoO LMS points standings by 194 markers and leads third-place Shane Clanton of Fayetteville, Ga., by 198 points, so he’ll lock down a $60,000 runner-up finish as soon as everyone enters Thursday night’s qualifying program. He’s obviously disappointed to fall short of another championship, but he’ll gladly take second-place money after a season that saw him nearly forced off the circuit by an outbreak of mechanical trouble – with his race car and hauler – in June.

“We actually had a decent season except for that one period where we broke a bunch of stuff and our truck broke down,” said Eckert. “We struggled through that stretch, but we got back on track in July and we’re finishing real strong.

“But Darrell’s been awesome all year. You can’t catch a guy when he runs top-three just about every race, so hat’s off to him and his crew. They work hard, and they just beat us this year. Hopefully we can come back next year and beat them.”

Free of points pressure, Eckert is ready to enjoy the 2012 WoO LMS season finale – an event that he considers one of short-track racing’s true spectacles.

“For us racers, it’s work,” Eckert said of the PEAK World Finals Presented by NAPA, which also includes the WoO Sprint Car Series and the Super DIRTcar Series for big-block Modifieds. “But for a fan – man, it’s really cool to go to. If I was a fan, I’d enjoy the s— out of it.

“Hell, if I’m not racing, I usually end up at a Sprint Car race somewhere around home, so I enjoy all kinds of racing. It’s all cool to me, so I think it would be a cool ticket to get. I mean, it’s a really good deal to be able to see all three classes at such a great place – there’s so much stuff around Charlotte to do. For a race-crazy fan, he can go visit Cup shops all day long, watch races all evening, and then get up again the next day and do it all over again and still not hit the same shops.”

CORONATION: Darrell Lanigan will clinch his second career WoO LMS championship at The Dirt Track, putting him alongside Josh Richards as the second two-time titlist since the tour was restarted in 2004 under the World Racing Group banner.

Lanigan, 42, will receive his championship trophy at the conclusion of Saturday night’s racing program. He’ll share the stage with presumptive WoO Sprint Car Series champ Donny Schatz and the 2012 Super DIRTcar Series big-block Modified titlist (Matt Sheppard of Waterloo, N.Y., is currently in the driver’s seat to capture that crown).

The cherry on top of Lanigan’s weekend would be a victory in at least one of the two WoO LMS A-Mains. Only one WoO LMS regular has won a PEAK World Finals Presented by NAPA A-Main: Richards, in the ’08 finale.

In the 10 World Finals A-Mains contested since the event’s birth in 2007, Scott Bloomquist of Mooresburg, Tenn., and Jimmy Owens of Newport, Tenn., lead all drivers with three wins each. Bloomquist won the Friday-night opener from 2007-09, while Owens has topped the Saturday-night finale in each of the past three years.

Other World Finals winners include Jonathan Davenport of Blairsville, Ga. (first half of doubleheader in both 2010 and ’11) and Donnie Moran of Dresden, Ohio (finale in ’07).

All previous World Finals winners are expected to enter this weekend’s action.

THE POINTS RACE: While Lanigan and Eckert will lock down the top two spots in the 2012 WoO LMS points battle once they enter this weekend’s program, there are some positions – and a significant amount of points-fund cash – up for grabs.

* Clanton, who currently holds third place by 84 points over Chub Frank of Bear Lake, Pa., can clinch the $40,000 show position by finishing at least 20th in both A-Mains.

* Frank has a shot to move up to third, but he also can slip back as far as sixth. He leads fifth-place Tim McCreadie of Watertown, N.Y., by 38 points and sixth-place Clint Smith of Senoia, Ga., by 84 points.

* McCreadie can overtake Frank for fourth, but he also could tumble to seventh with a poor weekend. He leads Smith by 46 points and seventh-place Bub McCool of Vicksburg, Miss., by 86 points.

* Smith can climb as high as fourth but also slip to seventh, while McCool is virtually assured at least a seventh-place finish but can move up to fifth.

* The remainder of the regulars – eighth-place Vic Coffey of Caledonia, N.Y., ninth-place Tim Fuller of Watertown, N.Y., 10th-place Pat Doar of New Richmond, Wis., and 11th-place Kent Robinson of Bloomington, Ind. – are pretty much settled into their respective positions in the points.

Fans will also have a chance to get close to the drivers and their cars by upgrading their grandstand ticket to include a pit pass for just $15 per day. Three-day pit passes are available for $85 without a grandstand seat.

Throughout the event fans will enjoy a huge midway with driver merchandise trailers, sponsor displays and more. In addition, kids can have fun at the Charlotte Motor Speedway Fan Van, complete with interactive games. Lug Nut, the ‘World’s Fastest Mascot,’ will also be on hand.

There will also be a giant fireworks extravaganza for the fans during the Friday and Saturday programs.

On Thursday the front gate is scheduled to open at 4 p.m. with hot laps at 5 p.m. The front gate will open at 3 p.m. and hot laps will start around 4 p.m. on Friday and Saturday.