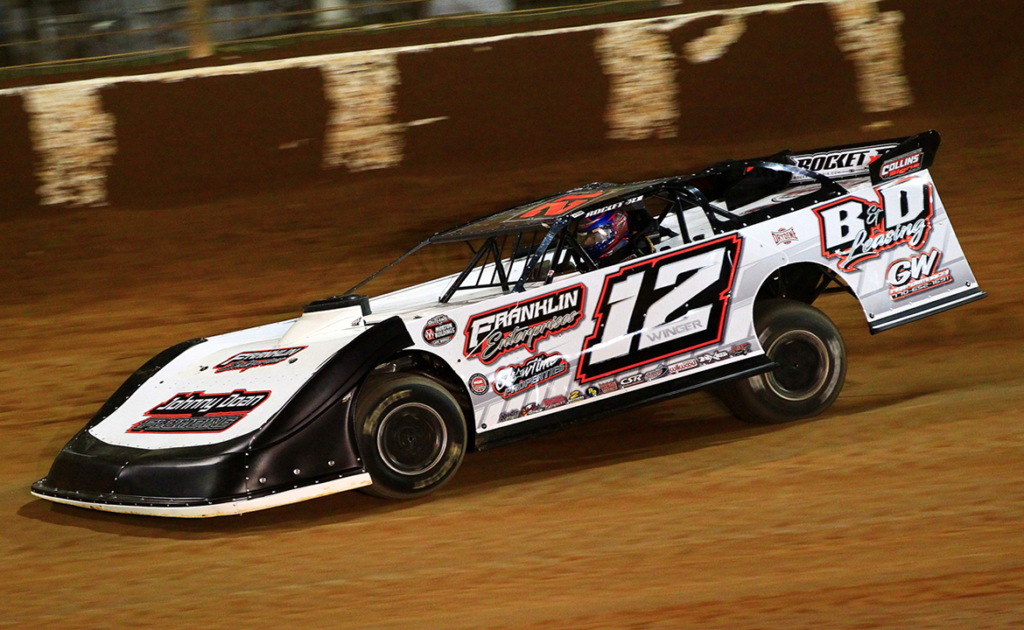 CONCORD, NC – With just 37 days until the kickoff of the 2020 World of Outlaws Morton Buildings Late Model Series season on Jan. 3 at Vado Speedway Park’s inaugural Battle at the Border, the first 2020 Rookie of the Year prospects are stepping into the spotlight.

Ashton Winger has been one of the brightest rising stars in the Southeastern Super Late Model scene in 2019, scoring several victories in regional competition, most recently turning heads in Victory Lane at Whynot Motorsports Park’s Fall Classic.

In that race, he defeated the likes of former full-time Outlaws Tyler Erb, Devin Moran, Morgan Bagley and former World of Outlaws Rookie of the Year David Breazeale in addition to current full-time Outlaws Darrell Lanigan and Dennis Erb Jr. These names are some of the best in the business, and that’s the kind of competition he looks to continue to battle against, night-in and night-out next season.

“I want to race the best guys in the country every night, and the best guys in the country run the World of Outlaws tour,” Winger said. “I just get annoyed at everybody talking about ‘the World of Outlaws are weak’ or whatever… I don’t know why we can’t just admit that everybody’s a badass and go on about our business, because anybody that goes out on the road and is competitive every night is obviously doing something right.”

“It was really casual, honestly. He called and said if we can provide some help on his stuff, he’d provide some help on mine. It was just like a trade-out deal. I don’t know if he ever saw it going to these heights, I certainly didn’t, but I’m glad it has,” Winger said.

Coming from Bandolero racing at age nine, Winger made his debut in a Dirt Late Model in 2015 at just 15 years old. Starting out with just a race here and there in the Super Late Model ranks, the Hampton, GA-native bounced around between Super and Crate Late Model racing until taking his Super program full-time in 2019.

Now almost 20 years old, Winger has been around the block a few times and learned a lot from the veterans of the sport. He’s got big future plans to become one of the best drivers on the circuit, and it starts with one giant leap to a national tour.

“I started racing Late Models when I was 15, so I’ve been around it my entire life,” Winger said. “I’ve seen it long enough to know that you’re only as good as they guys you race. If you stay at a local or regional level and the national guys come in, nine times out of 10, they’re going to show you whey they’re national guys.”

Armed with a few brand-new Rocket Chassis, car owner Billy Franklin’s experience and a heap of willpower and determination, Winger decided 2020 is the year to pull the trigger. This is something he’s always wanted to do, and now the stars are all aligned.

“I’ve always had Rocket cars, always had pretty good motors and all that, but now we’ve got an arsenal of stuff. And now, we’ve got a full-time crew guy. Stuff has just lined up.”

Statistically speaking, Rookie of the Year contenders who come into the season already having wins in the division tend to yield far better results than those without. Seven Super Late Model victories in Winger’s first full-time year of regional competition have blessed him with a bank of confidence, now that he’s shown he’s worthy of competing with (and beating) the nation’s top racers.

“It’s pretty much a sigh of relief when you’re racing with good guys already and you’re competitive,” Winger said. “It definitely feels good to know we’ve got a couple of wins under our belt, because the first ones are always the hardest ones to get.”

Growing up around his home track of Senoia Raceway in Senoia, GA, the Winger family has enjoyed a longtime friendship with former World of Outlaws champion Shane Clanton. Winger was recently victorious in Clanton’s father’s tribute race, the Billy Clanton Classic, and recalls the days of his grandfather and Billy Clanton racing together. Fast forward to 2019, and The Georgia Bulldog has since passed on a bit of his racing knowledge to the 2020 rookie, where they’ll both hit the road in search of championship title honors.

With that veteran tutelage, Winger’s skill behind the wheel has improved immensely. He said he’s learned a lot from the pros he’s raced against around home and is ready for an even bigger challenge in 2020.

“Even when I raced Crates somewhat locally around Senoia [Georgia] or wherever, I raced with Clint Smith every week or Michael Page every week. I’ve always raced really good guys, and I think that’s the biggest reason why we’re going to try and run the Outlaw deal next year, because it makes you better,” Winger said.

Catch Winger, Clanton and the rest of the Outlaws in the season opener on Jan. 3, 2020 at Vado Speedway Park for the first round of the inaugural Battle at the Border!

As always, fans can watch the 2020 World of Outlaws Morton Buildings Late Model Series season unfold LIVE from home with a Late Model FAST PASS subscription to DIRTVision and see the best Dirt Late Model racing all year round!