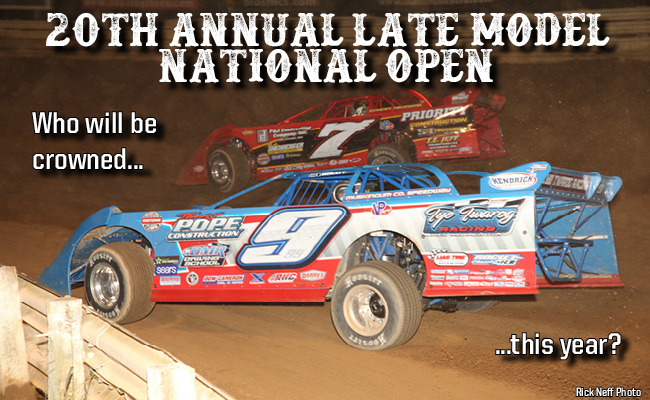 A big $10,000 check is up for the driver who tames the Superspeedway of Dirt Track Racing, as are those always-valuable championship points and bragging rights to a title that began its legacy almost 20 years ago.

Inaugural winner Chris Shuey picked up victories in 1999 and 2001. Reigning Champion and five-time winner of the event, Jeff Rine, scored victories in 2005, 2006, 2008 and 2009. According to the Selinsgrove Super Late Model points standings, Rine currently sits 14th, although he will definitely be a favorite to defend his title come race day.

For the first 14 years of the event, the World of Outlaws was not sanctioning the race. In 2013, Series veteran Darrell Lanigan scored his first of three consecutive National Open wins in the very first World of Outlaws-sanctioned Late Model National Open. The only other winner of the event yet to be mentioned since the Outlaw sanctioning in 2013 is Billy Moyer Jr., who took home the trophy in 2016.

After 51 of the 60 scheduled races complete in the 2018 campaign, Chris Madden holds a slim points lead over nearby contenders Mike Marlar and Brandon Sheppard. Just 30 points separates the top three, and the battle will be heating up once again at the Outlaw Speedway on September 21, just one day before the National Open.

With seven wins tallied this season, Madden looks to extend his point lead heading into Atomic Speedway the following weekend. After Atomic’s rainout make-up from May 18 and 19, only the Chi-Town Showdown and World Finals at Charlotte remain on the schedule. Time may be running out for any new championship contenders, but there are still some opportunities left to make up ground before the final checkered flag drops on the 2018 season.

The ticket booth, will call, pit gates and grandstands all open at 4 p.m. on race day, with hot laps beginning at 6:30 p.m. and time trials to follow. Opening ceremonies and racing begins at 7 p.m.