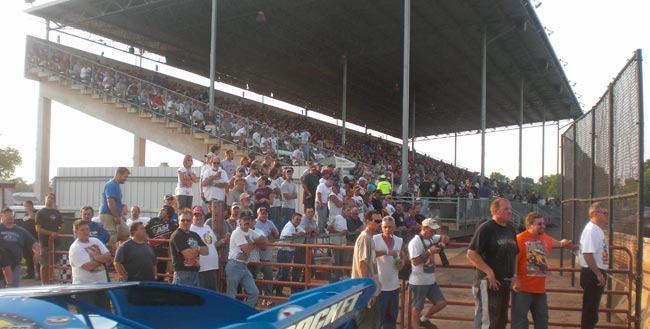 SHAWANO, WI – Aug. 2, 2011 – Most of the stars of the World of Outlaws Late Model Series got their first taste of the sprawling Shawano Speedway last year.

What was the traveling standouts’ consensus opinion of the half-mile fairgrounds oval? They seemed to enjoy their visit – and that’s why they’re looking forward to the national tour’s return to Shawano this Wednesday night (Aug. 3) for another mid-week spectacular topped by a 50-lap, $10,000-to-win A-Main.

“Shawano is probably one of the better bigger racetracks that we go to,” pronounced tour stalwart Shane Clanton of Fayetteville, Ga., who finished fifth in last year’s WoO LMS headliner. “I like any racetrack you can race on, and Shawano is one of those places where you can race two- and three-wide in the feature.”

Last year’s WoO LMS event – the tour’s first since 1989 at the tradition-laden Badger State track – was dominated by three-time series champion Billy Moyer of Batesville, Ark., who put on a clinic in setting a new track record during qualifying, winning a heat race and leading every lap of the A-Main without facing a serious threat. Behind Moyer, however, was plenty of close competition to keep the attention of the evening’s capacity crowd, including tense, race-long battles for second and fourth and a methodical march through the pack by 2006 World of Outlaws titlist Tim McCreadie of Watertown, N.Y.

The war for the runner-up spot in 2010 was waged between Wisconsin drivers Brady Smith of Solon Springs and Jimmy Mars of Menomonie. Smith held on to take the bridesmaid position in what was his first-ever start at Shawano, while Mars, who won a major WISSOTA Late Model event at Shawano in 2008, settled for third.

Fourth place in last year’s A-Main, meanwhile, was claimed by two-time defending WoO LMS champion Josh Richards of Shinnston, W.Va., who slipped by Clanton for the spot on lap 41 with an outside move off the fourth corner. The race for position helped make both drivers fans of the Shawano layout.

“That’s a good place to race,” said Richards, who enters Wednesday’s action sitting second in the ’11 WoO LMS points standings with four wins to his credit. “It’s smooth and fast, and you can pass if your car is working and you find the right line. We found a good line (to overtake Clanton last year) but there weren’t enough laps left (to advance further).”

“It raced real nice,” added Clanton, whose two top-five finishes in a struggle-filled ’11 season have come in the tour’s last four events. “The line was kind of right against the cushion in qualifying and then it widened out a little bit in the heats – and then it really widened out in the feature to where you could race all over it. It’s single-file down the straightaway because you’re running so fast and the draft takes effect there, but you can run from top-to-bottom in the corners.”

McCreadie was the Outlaw who put the biggest charge into Shawano’s fans last year. He discovered a unique outside/inside line around the track during the caution-free second half of the A-Main, allowing him to pick up four spots over that stretch and net a respectable seventh-place finish after starting 16th in his Sweeteners Plus car.

The run gave McCreadie a good impression of Shawano, a challenging speedway he sees as a good proving ground for setups he would like to use in upcoming major events.

“I want to run good on hard tires and an icy-slick track – like Shawano – because that’s where the money’s won,” said McCreadie, alluding to prestigious high-dollar shows contested on slick ovals like the DIRTcar UMP-sanctioned World 100 on Sept. 9-10 at Eldora Speedway in Rossburg, Ohio. “Look at who won (at Shawano) last year. Look at how Moyer handled the place and what he’s done in his career.”

Of course, McCreadie, who plans to run a Victory Circle chassis that Moyer helped design on Wednesday night, is hoping that he doesn’t have to work quite as hard to get to the front of the pack in his second appearance at Shawano. He needs a much better qualifying effort (he was 20th-fastest in time trials last year) to put himself in position to do more damage.

“After the race last year I said to Al (Stevens, then his chief mechanic), ‘I had to do that just to get to seventh. Just imagine if we could actually start up front with those guys and do what we did to put us over the top,'” said McCreadie, who is third in the WoO LMS points standings and carries a streak of 12 consecutive top-10 finishes into Wednesday’s program. “We’ve been in the same kind of rut lately (qualifying poorly, starting deep in the A-Main field and then rallying to finish well), but I feel like we’re getting close to putting it all together earlier in the night so we don’t have to work so hard at the end just to get up there into contention.

“I’ve been working with this car (he’s run the Victory Circle since mid-May) and I know in my heart it’s really good. We’re getting it balanced, and I’m looking forward to seeing what we can do with it (at Shawano).”

Several WoO LMS regulars mention Shawano when asked for a list of favorite tracks they’ve visited on the tour, including 2008 champion Darrell Lanigan of Union, Ky. (the eighth-place finisher in last year’s event tends to prefer bigger ovals) and Clint Smith of Senoia, Ga., a one-time bullring lover who has come to appreciate the challenge of racing on a “big superspeedway-type racetrack” like Shawano.

“Earlier in my career I was always intimidated by the bigger places because, coming from the south, all of our tracks are three-eighths (mile) or smaller usually so I just never got used to running big tracks,” said Smith, who has entered all 302 WoO LMS events run since the World Racing Group restarted the tour in 2004 following a 15-year hiatus. “But now, running the big tracks is easier than the small tracks for me. We’ve adapted our driving to the high speeds and the bigger tracks seem to suit our Rocket cars.

“I really like Shawano. It’s a super-good racetrack as far as passing, and it’s a super-nice facility too.”

Smith just hopes he fares better on Wednesday than he did a year ago. He suffered race-ending engine problems midway through the A-Main and finished 22nd, but he’s buoyed by the fact that he felt strong navigating the track (he charged forward in his heat to finish third) before mechanical trouble set in.

Some top-notch talent is expected to face off with the World of Outlaws racers, including Wisconsion’s Brady Smith, Mars, Dan Schlieper of Sullivan, Kerry Hansen of Spencer, Nick Anvelink of Navarino, A.J. Diemel of Bonduel, Tim Isenberg of Marshfield, Troy Springborn of Shawano and Joe Reuter of Shawano as well as DIRTcar UMP stars Jason Feger of Bloomington, Ill., Dennis Erb Jr. of Carpentersville, Ill., and Kent Robinson of Bloomington, Ind.

Wednesday’s program, which also includes action for the IMCA Stock Cars, is scheduled to begin at 7 p.m.

Shawano Speedway is located about 45 minutes northwest of Green Bay and three-and-a-half hours east of Cedar Lake Speedway, where the WoO LMS heads for the 24th annual USA Nationals presented by U.S. Steel on Aug. 4-6.

Additional information about Shawano Speedway is available by visiting www.shawanospeedway.net.