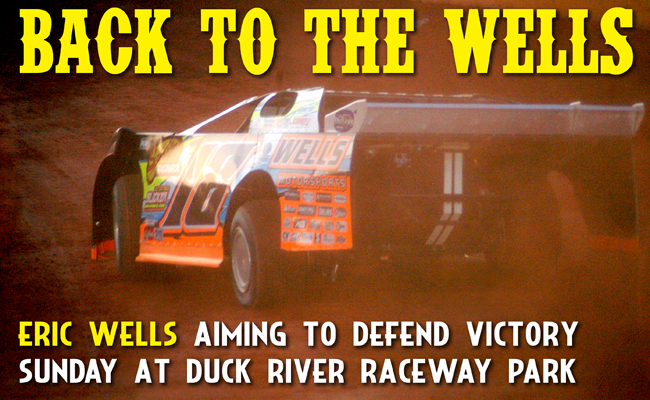 Alabama driver hopes for breakthrough performance against Outlaws in his territory

WHEEL, Tenn. – May 13, 2014 – Florence, Ala., driver Josh Putnam will try to record his name on the World of Outlaws Late Model Series record books as the full-fendered tour rolls into his home track for the $10,000-to-win event this Sunday, May 18.

Duck River Raceway Park, located outside the small community of Wheel, Tenn., was all set to host World of Outlaw Late Model Series action on April 11, but Mother Nature intervened halfway through Ohlins Shocks Qualifying and the event was postponed to start in its entirety to this Sunday night. Bob Harris and crew will welcome the Outlaws for the second-ever visit. During last season’s event at Duck River, Eric Wells of Hazard, KY was victorious with the $10,000 payday in a thrilling race over Darrell Lanigan and Tim McCreadie.

The 30-year-old Putnam has somewhat struggled early this season but went out of the 2013 season in a huge way, winning the track’s Deep Fried 75 event which paid the Crimson State driver $10,000.

“We wrecked our car that we had good luck out of last year and I’ve been in the process of building a new house so the guys have been doing all the work on the car, I don’t know whether that’s a combination of me not being in the shop and doing all our homework, but we’ve had some good runs, just haven’t put everything together,” stated Putnam.

Putnam’s success last year is a good momentum as the Outlaws roll into town.

“We’re kind of a smaller group here, it’s all family oriented, and to run against those guys it’s a privilege. For those guys to give me the respect to put these things wheel to wheel on a track like this, I’m telling you this baby is wide open a lot of times, we run that whole race (2013 edition of the Deep Fried 75) in low lap times close to what we qualified in, even in lapped traffic and stuff I didn’t get a mark on the car, it’s a privilege to run with those guys and to get a win. If we could put that thing in there for the World of Outlaws, I’d be speechless, just like I was for the Deep Fried. We come off last year with a lot of momentum, it hasn’t showed this year yet, the stars haven’t lined yet, but maybe we’ll get them there,” stated Putnam.

When it comes to tires, Putnam says he’s at a disadvantage on more open compound tires.

“It’s a disadvantage to me, we’ve got several selections there and I’m going to really have to think through this and rely on others to ask some questions. Brian and Charles with Hoosier, those guys are great to me, but the hard tire rule (from last year’s Deep Fried 75) you always think back when you’re doing your homework and looking at your notes, you look at times that we’re turned on hard tires here and you want to think to come here and watch your times on soft stuff, but you never know, you get a long green flag run at this thing, and if I take the gamble and put hard tires on, that might be the race winning gamble,” Putnam said.

Putnam and team have traveled with the Southern All Stars this year and by running a few different compounds he feels that attributes to his tire learning curve. “We’re getting better, I’m learning, maybe that’s some of our struggle this year, not really knowing exactly what to do on the tires. We ran that Southern Regional deal the last four or five years and ran that hard tire rule on the back, that’s what you run. So maybe we can rely on some of those guys and pull one off but I think we still have a good hand in it,” stated Putnam.

“The track has been good so far this year, Bob (Harris) has a hard tire rule and it’s been right on the track record with hard tires. Duck River widens out and gets racy, its action packed. I think we’ll all be good with it,” said Putnam about track conditions this year.

The team looks to get back to basics as the Outlaws roll back in to Duck River this weekend.

“Since we’ve struggled we’ve been looking for the help we need and a lot of help from Bob (Pierce) on these race cars. Since we’ve struggled we really went on a limb and tried some different stuff from last year just car wise and now we’re back to square one. We went back to our baseline that we we’re good on last year and let’s get our momentum from there, maybe the direction we wasn’t going was what I need as a driver, and what little Bobby (Pierce) has done in that race car in the last few weeks is mind blowing to me to watch his car, I just haven’t found that yet. We’re different, and I can’t run the same things that Bob has, we have found that out,” stated Putnam about his relationship with chassis builder Bob Pierce.

Gates open at Noon Central on Sunday at Duck River with the drivers meeting at 4 p.m. and racing at 5 pm. Adult general admission is $25 while pit passes are $40. The 2-Barrel/Crate Late Models, Pure Pony, Pure Stock, Modified Street and Outlaw Pony Classes will all be on the racing card. Tickets and armbands for both the stands and pits from the April 11th rainout will be good for this event at Duck River.

Tanner & Terry English of Benton, Ky., along with Shelbyville, Tenn., driver Daniel Miller, Brad Skinner of Springhill, Tenn., David Seibers of Petersburg, Tenn., Jason Hiett of Oxford, Ala, Billy Ogle Jr. of Knoxville, Tenn., Riley Hickman of Chattanooga, Tenn., Skylar Marlar of Winfield, Tenn., Eric Hickerson of Linden, Tenn., Caleb Ashby of Cunningham, Tenn. along with National Stars Ray Cook of Brasstown, N.C. and Dale McDowell of Chickamauga, Ga. are expected to be in attendance for one of the largest events the track will host all season.

A full show of Practice, Ohlins Shocks Qualifying, Heat Races, Last Chance Showdowns and 50-lap mains will be on tap at Duck River for the World of Outlaws Late Model Series competitors.

For the 201, Smoky Mountain and Duck River swings, competing teams will be restricted to using Hoosier 1300, 1350, 1450, 1600 and 55-compound tires or American Racer 44, 48, 53 and 56-compound rubber. All of the tires will be required to punch a minimum ’40’ reading when checked with a durometer. For 201 Speedway only, the Hoosier 1425 compound will be allowed in addition to the above mentioned Hoosier compounds.