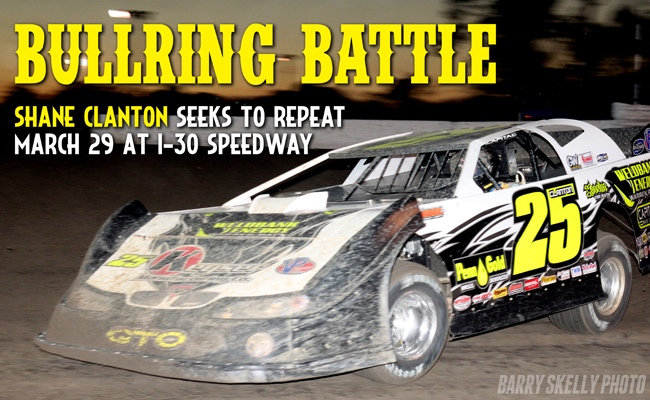 Clanton aims to repeat, McCreadie seeks victory that got away

The tour made its debut at the facility in 2013 and great crowd and field of cars converged on “Hammer Hill” with Shane Clanton, of Zebulon, Ga., scoring the win after leader Tim McCreadie, of Watertown, N.Y., encountered issues late in the race in lapped traffic.

Entries from more than 10 states are expected to be in action.

Promoter Tracey Clay notes, “I was really excited to have the World of Outlaws here in 2013, and we are even more excited to have them here again in 2014. The phone has been ringing off the hook for the past few weeks with calls from fans and racers. We expect a near record crowd for this event.”

A complete program for the World of Outlaws Late Model Series will be contested, including Ohlins Shocks qualifying, heat race action, last chance events, and the 50 lap, $10,000-to-win/$700-to-start finale.

Joining the Outlaws on the evening’s card are IMCA Open Wheel Modifieds and Super Stocks.

Advanced adult, grandstand admission tickets are available for $25, which is a $3 savings. Tickets may be purchased in advanced by calling 501-455-4567 or by e-mailing Tracey Clay at [email protected] When e-mailing, please put “WoOLM” in the subject line.

Tickets may be purchased at the gate for $28 on the day of the show. Grandstand admission for children ages 6-12 are $5, when accompanied by an adult, and ages 5-and-under are free in the grandstand area. Pit passes are $35.