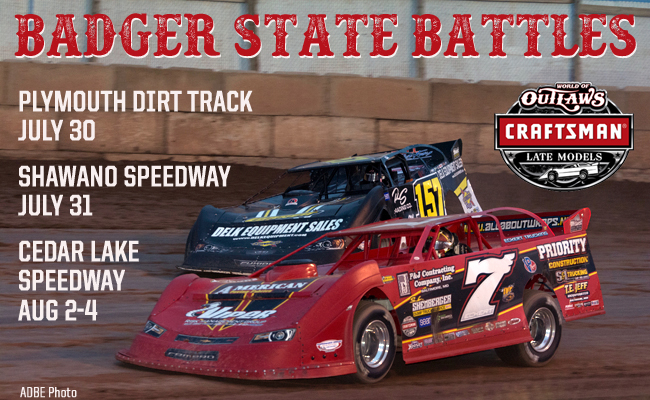 CONCORD, NC – July 18, 2018 — The World of Outlaws Craftsman Late Model Series continues the 2018 season with a swing through Wisconsin that includes stops at three different tracks with five days of racing in just six days. The Series swing through the Badger State is one of the richest weeks of the season with more than $250,000 up for grabs.

The action-packed week kicks off at Plymouth Dirt Track on Monday, July 30, followed by Shawano Speedway on Tuesday, July 31, and culminates with the highest paying Outlaws show of the year, the $50,000-to-win USA Nationals at Cedar Lake Speedway on Aug. 2-4.

The top three in points, led by four-time 2018 feature winner Mike Marlar, are separated by a mere 34 points heading into perhaps the most pivotal stretch of the year. With 2017 runner-up Chris Madden trailing Marlar by just 22 markers and defending Series Champion Brandon Sheppard stalking both in third by just 34 points (12 back of Madden), the chase for the 2018 championship will surely come down to the wire with the most pivotal race week of the season taking shape in the great state of Wisconsin

Last year, 2011 Series Champion Rick Eckert went to victory lane, his last Series win and 37th all-time as the Outlaws make their tenth ever appearance at the sprawling half-mile that hosted the Series for the first time back in 1989. In the last eight consecutive shows, Eckert holds the most consistent runs with six top-five finishes at Shawano. He has only ever finished outside of the top 10 once, placing 11th in the 2010 shootout.

“I’ve always been fond of this place, but I don’t think I’ve ever won here so it’s good to get a win here,” Eckert remarked in Victory Lane after climbing from his #7 Monumental Paving & Excavating / Paul Crowl Racing entry a year ago. “It’s great to see this crowd of fans here. That is awesome. I want to thank all the fans for coming out. The race track was really good, and the rain held off so all of that was good.”

Eckert is still on the hunt for his first win of the 2018 season. The veteran driver from York, PA just scored his best finish of 2018 with a third place run at Ogilvie Speedway (MN).

The trip through Wisconsin ends just 3.5 hours west with the 31st annual USA Nationals at Cedar Lake Speedway (WI,) located just across the Minnesota/Wisconsin state line in New Richmond, WI. A full Outlaws show, paying $6,000 to win kicks off the weekend on Thursday, August 2, while Friday, August 3 is Qualifying night for the big $50,000-to-win main event on Saturday, August 4 — the highest paying race on the 2018 Outlaws schedule.

Last year, during the 30th annual USA Nationals, Don O’Neal pocketed the $50,000 prize, while Chris Madden swept the preliminary night, turning the fastest lap on the track during qualifying, holding off charges from Scott Bloomquist during their heat race and defending the lead during the Feature from Frank Heckenast Jr., Billy Moyer and Brandon Sheppard. The crown jewel brought 42 Late Models to the Cedar Lake Speedway stage, all of whom were trying to claim a piece of a near $200,000 purse for the three-day show.

To put things in perspective, the winnings that are up for grabs are more than one-third of Madden’s $137,900 winnings so far this season. The amount is also half the amount he could get for winning the Series Championship this year. Top dollar draws top competition, which draws top crowds.