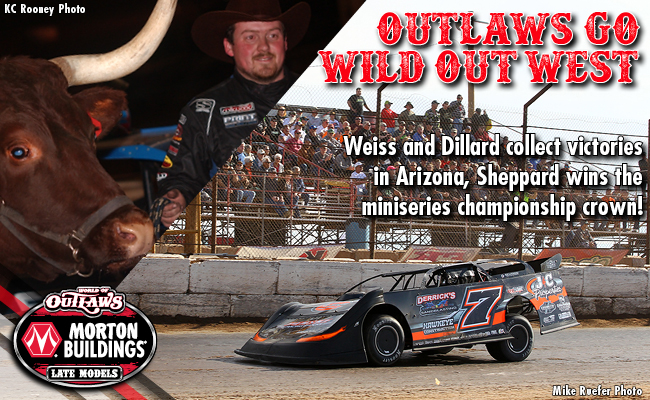 Outlaws Believe Southwest Success Will Propel Them to Quick Start at Screven, Volusia

In all, Outlaw drivers posted three wins, 17 top-5s, an average finish of 6.6 over six races and the overall points championship. Not a bad showing for two rookies, a tour veteran and a former Series champion.

Half of the miniseries was dominated by three-time DIRTcar Summer Nationals Champion Bobby Pierce, who earned three wins in the first three races. The Outlaws domination picked up in the second half of the event.

2019 Rookie of the Year contender Ricky Weiss picked up his first victory of the year in the afternoon portion of the second-week Saturday double-header; a rainout makeup show from the previous Sunday. In what was perhaps the cleanest Outlaw victory of the weekend, Weiss started in the third spot and took the lead on lap seven. He would never relinquish the spot, holding off a hard-charging Sheppard.

Just a few hours later in the second half of Saturday’s doubleheader, another Rookie of the Year contender — Robeline, Louisiana’s Cade Dillard – also took advantage of his third-place stating spot, taking the lead on lap 17 after then-leader Pierce blew a right-rear tire in turn three.From that point onward, “The Thriller” fended off a charge from a very hungry Scott Bloomquist the rest of the way, diving in and out of lapped traffic to earn what he said was the biggest win of his young Late Model career.

“I took the lead at that point and I had no idea who was second or third,” Dillard said. “I knew there had to be some good cars back there. My crew guys told me they got pretty close back there at one point. Then I saw Scott under me and I knew there was only a couple of laps left, so I definitely gave it all I had the last four or five laps.”

At this level, a lot of rookie drivers will say it’s all about confidence and momentum moving forward. With the big win in Arizona, Dillard ensured himself he’ll have quite a bit of momentum heading into the World of Outlaws season opener at Screven, where he’ll start his battle for Rookie of the Year against drivers including Weiss.

“I definitely feel like we’ve got just as good of a chance as anybody,” Dillard said. “Especially after going down there and getting the year started, it’s definitely a confidence booster.”

The final race of the miniseries once again saw Pierce jet out to a commanding lead early on, only to be thwarted yet again by equipment failures. A broken quick-change gear piece in the rear end cut his race short, which handed the lead over to Scott Bloomquist. The 2004 Series champion carried the load, with protégé Weiss following close behind, until the very last lap, when R.C. Whitwell spun on the top side of turn three and collected Bloomquist. This handed the lead, and the race, over to Weiss, for his second visit to Victory Lane in two days.

Third. Fifth. Fourth. Second. Fifth. Third. Those were the finishes that earned 2017 Series Champion Brandon Sheppard the overall miniseries championship crown. Finishing inside the top five once, for some drivers, is difficult enough, but “The Rocket Shepp” accomplished the feat in each race over the miniseries. An average finish of 3.7 and a victory lap atop an Arizona bull sure gives the former champ a ton of momentum going into Screven Motor Speedway for the season opener.

The overall points title certainly goes to show just how much momentum and confidence Sheppard has heading into the first month of World of Outlaws competition, slated to be one of the toughest years of competition in recent history.

“That’s the biggest thing this year going into the Outlaw tour,” Sheppard said. “It’s just about staying consistent and finishing races and, obviously, winning races. That’s what our goal is, to win races… I know that Mark Richards Racing, Rocket Chassis house car is going to be on point right from the get-go.”

Series veteran Chase Junghans also had his highlights, posting four top-10s and two top-fives with an average finish of 9.3. The Kansas-native also led the first 16 laps of round one action on the first Saturday night. Unfortunately, he would get tangled up with a hard-charging Weiss, who came from 12th, taking them both out of the race. He and Weiss both described the situation as “it is what it is.” What a great rebound Junghans would have, though, as he went on to post two sixth-places and two fourth-places over the next five races.

Now that he has some experience at the usual tracks the Outlaw tour visits, Junghans feels like he’s truly ready to harness his potential, starting at Screven.

“We ended last year on good terms and turned it over at the beginning of this year,” Junghans said. “Hopefully, we can carry that down to Speedweeks and get some good finishes there.”

Overall, a near-dream weekend in the southwest for Outlaws competitors has them focused on Screven and Volusia. The Series season opener is Feb 8-9 at Screven in Sylvania, GA. For more information, visit the track homepage.

LIMITLESS: Ricky Weiss pushing himself, new cars to the edge