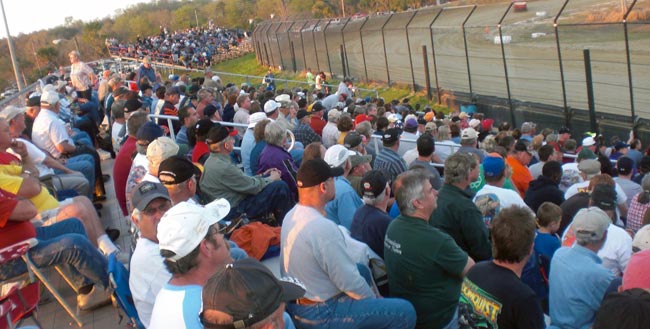 OCALA, FL – March 22, 2011 – World of Outlaws Late Model Series stars have seen it all during their travels around the country.

But the celebrated road warriors’ vast experience doesn’t make their job any easier when they visit the uniquely-contoured Ocala Speedway, which hosts the national tour for the second straight spring this Friday night (March 25).

A three-eighths-mile track that’s laid out more like an egg than an oval, Ocala will present one of the stiffest tests of the 2011 season to drivers chasing the $10,000 top prize in Friday evening’s ‘Sunshine 50.’

“There’s no other track shaped like Ocala that I’ve raced on,” said two-time defending WoO LMS champion Josh Richards of Shinnston, W.Va., who finished fourth in last year’s inaugural tour event at the oldest motorsports facility in Florida. “It’s a weird place. Both ends are totally different, which definitely makes it challenging for a racer.”

And great for the fans, who came out in record numbers for last year’s WoO LMS show to watch the nation’s best full-fender competitors attempt to tame the speedway.

“That’s Ocala,” said owner Mike Peters, who purchased the then-paved facility in late 2005 and ran it as an asphalt track for two seasons before returning the speedway to its dirt-surface roots in 2008. “Because of the shape, the racing is always real exciting. It’s really easy for drivers to make a mistake and get passed by the guy behind them before they can recover.”

Yes, getting around Ocala Speedway can be a tricky proposition. Consider a description of the track by Rick Eckert of York, Pa., one of two drivers who have started all 284 WoO LMS A-Mains contested since 2004.

“It’s really D-shaped,” said Eckert, who finished 13th in last year’s WoO LMS A-Main at Ocala. “I’ve been to D-shaped racetracks, but that’s the most D-shaped track I’ve ever seen. I tested one time a few years ago at New Egypt (N.J.), and that’s as close as I’ve come to seeing a track like Ocala.

How does a driver devise a car setup for Ocala? According to Eckert, that’s a mystery.

Union, Ky’s Lanigan, the 2008 WoO LMS champion, won last year’s 50-lapper at Ocala, fighting off challenges from eventual runner-up Tim McCreadie of Watertown, N.Y., and third-place finisher Austin Hubbard of Seaford, Del., in a tense, crowd-pleasing race. But when asked how he was able to hit on a setup that worked at both ends of the track, he could only respond with a joke.

“We got a switch we flip halfway down the straightaway,” laughed Lanigan, who enters this weekend’s action coming off a convincing $20,000-plus victory from the 19th starting in last Saturday night’s ‘Cash Cow 100’ at Columbus (Miss.) Speedway. “Nah…really, you basically have to be good in one corner and manage the other one. It’s pretty different, real challenging.”

Adding to Ocala’s degree of difficulty for the barnstorming Outlaws is the track surface, a uniquely light-colored, tacky clay that can confound the most savvy dirt veterans the first time they lay eyes on it.

“The surface is different itself, I guess because of that Florida dirt,” said Richards, who comes into Ocala’s event tied with 2007 champion Steve Francis of Ashland, Ky., as the winningest driver on the WoO LMS since 2004, with 28 victories. “I think one thing that keeps the moisture in the track and keeps it fast is that the surface isn’t really deep. I think it’s only like 18 inches deep in some places on top of that pavement, so the water stays in there and the moisture keeps coming back up there all night long. You might think it’s gonna dry out, but that moisture just keeps coming back up and keeps the track real fast.

“I think that’s why you see good racing there all the time,” added the sensational 23-year-old. “It’s a really fast place, and the last (special Late Model) race there (a DIRTcar UMP-sanctioned event on Feb. 13 that saw Hubbard and Richards run one-two until both popped tires with four laps remaining) definitely showed you can put on great races there even if it’s a little rough.”

“The surface is 80 percent clay,” said Peters, a former airline pilot who oversees track prep at Ocala. “It’s very responsive to water, so it doesn’t need as much water put down on it as other tracks in Florida do. This is our fourth year working with it and we’ve gotten a good handle on it.”

Peters anticipates that he’ll be able to whip up a typically racy track for the ‘Sunshine 50,’ an event he is awaiting with baited breath.

“I’m thrilled about having the World of Outlaws back again,” said Peters, who attended high school in Ocala with current WoO LMS director Tim Christman. “To me, it’s an honor to have the best Late Model racers in the country come to Ocala.

“The speed of the Late Models, the skill level of the drivers – it’s just amazing. There was a battle for the lead the whole race last year and I would expect the same thing again.”

Other drivers with the event on their schedules are 2010 DIRTcar Summer Nationals champion Jason Feger of Bloomington, Ill., Tony Knowles of Tyrone, Ga., and Florida standouts Ivedent Lloyd Jr. of Ocala, who set fast time and led the first two laps of last year’s WoO LMS event at his hometrack, Tyler Ivey of Tallahassee, Mark Whitener of Middleburg and Christian Auspurger of Palm Beach Gardens.

In addition, Billy Moyer of Batesville, Ark., who leads the WoO LMS points standings after three events but is not planning to follow the entire schedule, confirmed on Wednesday that he will enter the ‘Sunshine 50’ as well as this weekend’s subsequent tour stops at Screven Motor Speedway in Sylvania, Ga., on Saturday night (March 26) and Needmore Speedway in Norman Park, Ga., on Sunday evening (March 27). He will be joined in the fields at all three tracks by Henderson Motorsports teammates Leon Henderson of Laurel, Miss., and David Breazeale of Four Corners, Miss.

Ocala’s pit gates are scheduled to open at 3 p.m. and the grandstands will be unlocked at 5 p.m. on Fri., March 25. Practice is scheduled to begin at 7 p.m. and racing is set to start at 8 p.m.

General admission tickets to the WoO LMS program, which will also include action for the track’s Amsoil Thunder Stocks division, will be $30 (adults), $15 (ages 6-15) and free for kids under 6. All tickets for this year’s event are actually ‘all-access’ passes, allowing entrance to the pit area as well so fans can get a close-up look at the WoO LMS cars and meet the invading stars.

More information on Ocala Speedway is available by logging on to www.ocalaspeedway.com or calling 352-622-9400.