NOT OVER YET: Drivers Jockey for Championship Position at Last Call 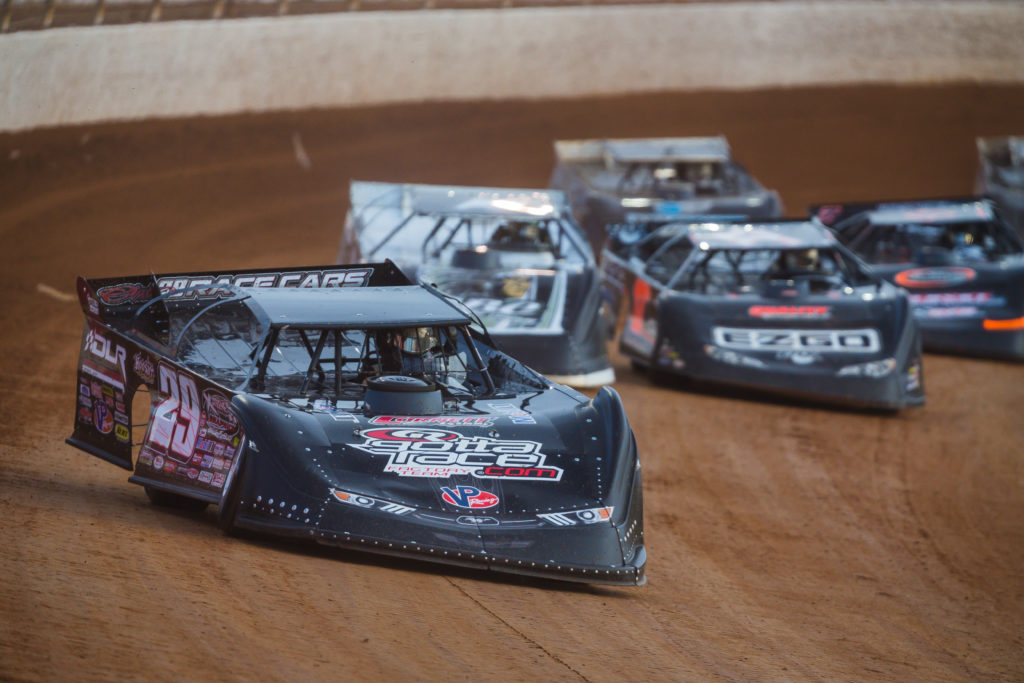 For four drivers, next week’s Last Call is the last shot to solidify or improve their championship finish in 2020.

In the midst of a wide open race for points, fans will witness a season-ending clash between Cade Dillard, Darrell Lanigan, Chase Junghans, and Dennis Erb Jr., all squaring off for third-through-sixth in the World of Outlaws Morton Buildings Late Model Series standings.

Entering the Wednesday & Thursday, November 4-5 doubleheader at The Dirt Track at Charlotte, this furious foursome is separated by only 82 points from top-to-bottom, but a big $16,000 difference could have a massive impact on their drives next week.

While this quartet still wages war for position, in front of them, the top two spots have essentially been locked up. Brandon Sheppard of New Berlin, Ill. just needs to sign-in on Wednesday and he’ll secure his third career World of Outlaws championship, while Ricky Weiss of Headingly, Man. requires two feature starts to claim his best career points finish of second.

Top 10 in World of Outlaws Points

Cade Dillard, of Robeline, La. (4,973 PTS), comes into the finale holding the third spot over Lanigan (-30), Junghans (-72) and Erb (-82). In the midst of a career year, Thriller brings in a 38-race resume which includes 23 top tens and 13 top fives to go along with his first two career wins. Coming in the form of a $15,000 payday in January at New Mexico’s Vado Speedway Park and a $30,000 score in June at Lernerville Speedway’s Firecracker, Dillard made sure to earn his first triumphs on the biggest of stages. In Cade’s only two previous starts at The Dirt Track at Charlotte, he finished fifth and 29th at last year’s World Finals aboard his MB Customs No. 97.

Darrell Lanigan, of Union, Ky. (-30 PTS), is a newly-announced National Dirt Late Model Hall of Fame inductee and aims for his best championship finish since he won his third World of Outlaws title in 2014. Leading into Last Call, The Bluegrass Bandit owns 24 top tens, 12 top fives, and one win this year, which was his 74th career series victory (only three behind Richards’ all-time mark of 77). Returning to a comfortable track with pivotal points on the line, Lanigan and his Viper Motorsports, Barry Wright ICON No. 29V are back at The Dirt Track at Charlotte where he’s won twice before in 2013 and 2014.

Chase Junghans, of Manhattan, Kans. (-72 PTS), is also chasing down a potentially career best championship finish with the World of Outlaws Morton Buildings Late Models. Becoming a top ten machine in 2020, the Kansas racer only nabbed two podiums and six top five finishes, but recorded 26 top ten results (third-most on tour) to slot himself fourth in points at the moment. In 12 career starts at The Dirt Track at Charlotte, Junghans and his Shop Quik No. 18 Rocket Chassis have earned four top ten finishes with a career-best of fourth-place in 2018.

Dennis Erb Jr., of Carpentersville, Ill. (-82 PTS), has used a phenomenal late-season comeback to claw his way back into contention for these top five spots in the World of Outlaws standings. With ten top fives and 21 top tens to his credit, The One Man Band sits on the cusp of fifth and not far from fourth or third following his win at Pennsylvania’s Eriez and his top five streak which brought him back from the brink. Like Lanigan, Erb and his Rocket Chassis No. 28 have won before at The Dirt Track at Charlotte, taking the cake back in 2017 at the World Finals.

The points chase for these four drivers will resume this coming Wednesday & Thursday, November 4-5, with the World of Outlaws Last Call at The Dirt Track at Charlotte. Offering #2ForTheRoad, this unique replacement event for the postponed World Finals, serves as the 2020 season finale.

Limited passes are available HERE. For those that can’t make it, you can watch all the action LIVE with the DIRTVision Fast Pass.

WHAT TO WATCH FOR: World of Outlaws take on tripleheader at Davenport