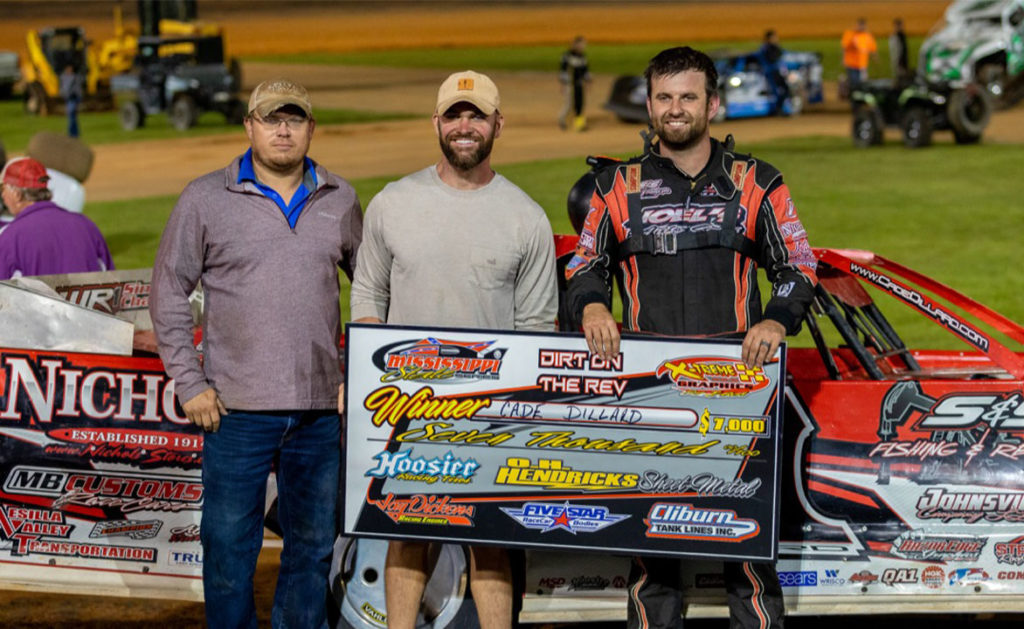 The Most Powerful Late Models on the Planet visit the Monroe, LA facility March 11-12

Whether on stage or at the dirt track, country music-star Dylan Scott takes the same hands-on approach to ensure a good show.

“If I want to do something, no matter what it is, I want to be hands-on and make sure I have a part in it,” Scott said.

Scott’s passion and the World of Outlaws CASE Construction Equipment Late Model Series will meet for the first time when the Series makes its debut at The Rev – part-owned by Scott – March 11-12. It’s an event Scott has been eager to bring to the Monroe, LA facility.

“First and foremost, I’m a race car and dirt car fan,” Scott said. “I grew up with it since I was a kid, so to be able to put dirt on this track in Monroe, be a big part of it, and in our third year get the World of Outlaws Late Models, it’s kind of the ultimate to me. I’m really looking forward to it.”

The singer’s racing fix started when he was young and like all kids, he eventually found that one driver he enjoyed following every week – multi-time World of Outlaws winner and Robeline, LA resident Cade Dillard. When Scott, along with Nich Brown, took over The Rev, his relationship with Dillard grew.

“I’ve watched [Dillard] since I was a kid just racing all over,” Scott said. “When I’m traveling on the road doing country music, I’d stop at a track where Cade would be racing. He didn’t know who I was, but I knew who he was.

“Since we put dirt on the track in Monroe and started running there, that relationship with Cade has been stronger.”

That relationship was a catalyst for The Most Powerful Late Models on the Planet making their first trip to the Pelican State since 2007.

“He’s been a huge help as far as just getting the World of Outlaws there,” Scott said. “He put the good word in and started that relationship for us, so he’s a big reason for them coming to Monroe.”

The Rev is about two hours away from Dillard’s Robeline, LA home. After traveling across the country for years, he finally gets the chance to race in his backyard on a national spotlight.

“I know a lot of people in the area are excited about it. I think it’s going to be a good deal and, hopefully, it’ll be a continued deal to get some races in that area.”

While it’s the first chance Dillard has at home against the World of Outlaws, he knows he may not have the advantage racing against some of the best drivers the country has to offer.

“Since dirt was on it, we ran two Late Model races, and we were fortunate enough to win those two and had a really good car in them,” Dillard said. “I feel like we can look back to our notebook and at least have a decent starting point.

“But obviously, the competition we race against, these guys unload about anywhere, and they’re competitive, so I wouldn’t really call it much of an upper hand.”

As the race approaches, buzz for the event has built. Dillard is hopeful those visiting for the first time enjoy the facility as much as he does.

“When you first come into Louisiana, the roads are rough,” Dillard said. “You’ll definitely notice that first-off. But I think everyone will be surprised when they get there and see what kind of facility it is.

“That place is state-of-the-art. It’s a super nice facility. So, I feel something like that deserves a race such as the World of Outlaws there.”

Dylan Scott’s hands-on approach includes an appreciation for the fans and the drivers like Dillard, who come to his Louisiana venue. He hopes he can show off his passion one lap at a time with an exhilarating experience they won’t forget – similar to the epic World of Outlaws NOS Energy Drink Sprint Car Series race from last year that still has people talking about it.

“I want to say thanks to the fans for the support,” Scott said. “Thanks for believing in what we’ve done and traveling and seeing the World of Outlaws at our track, and hopefully, they love us as much as we love putting events on.”