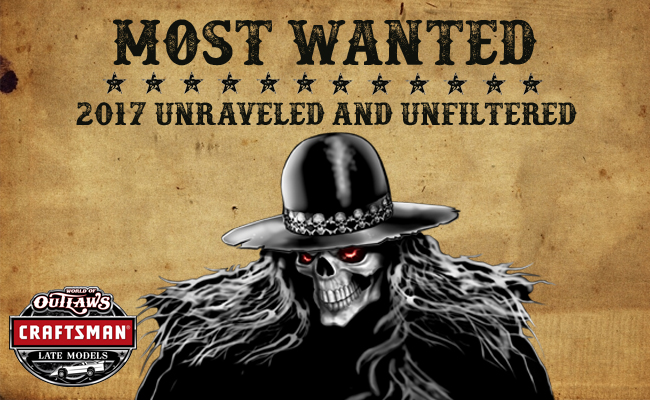 CONCORD, N.C. – Jan. 13, 2017 – The World of Outlaws Craftsman® Late Model Series gains a few new bruisers and everyone is gearing up for the season’s first shootout in 2017. The drivers and their crews will travel across familiar and unfamiliar terrain in hopes of keeping the title of the fastest guys around. The first real test for the traveling band will be a double header in February at Screven Motorsports Complex for Winter Freeze VII and Volusia Speedway Park for DIRTcar Nationals. With new names on the books for the 2017 season, anything could happen as we race toward World Finals in November.

Here are the guys we think you should put at the top of your Most Wanted list in 2017:

In 2017 Shane Clanton is going to show up at the ring hungry to reclaim his title as World of Outlaws Craftsman Late Model Series Champion. To say Clanton is a seasoned driver is an understatement. He earned his first series win in 2004 and has been a committed World of Outlaws full-time driver since 2005.  He earned his first championship title at the completion of the 2015 season. During his impressive 2015 season, Clanton saddled up and headed out with 10 wins, 34 top-five and 37 top-ten finishes of 43 total races.

Clanton has placed second in the overall point standings three times, including the 2006, 2013 and 2016 seasons. This past season, Clanton scored seven wins, 23 top-five and 32 top-ten finishes. At the 2016 season banquet after being overthrown by a newly crowned champion, Clanton pointed and said, “I’m coming for you next season.” Needless to say, Clanton may be the last guy showing any mercy on the track this season.

Young gun Billy Moyer Jr. is a surefire competitor for the future of the sport. Born from a Late Model legend who passed down his book of knowledge, Moyer Jr. is now writing his own chapter: earning the 2016 Rookie of the Year title and backing it up with two wins, six top-five, and 17 top-10 finishes. Moyer Jr. shows great enthusiasm and no hesitation to pull the trigger at the first sign of green.

When the series restarted in 2004, there were 12 full-time drivers and Rick Eckert was one of them. Eckert has been a frontrunner for some time, totaling 35 series wins, ranking fourth on the tour’s modern-era wins list and fifth on the all-time list. In 2016 Eckert finished third in the overall points standing where he is no stranger. Ten times throughout his career, Eckert has landed in the top five in the points race . Ultimately his dedication and success in the industry have earned this series pioneer a place in the 2017 Dirt Late Model Hall of Fame. We tip our hat to you, Scrub.

In the past Brandon Sheppard has made appearances on the World of Outlaws stage but has never committed to the series as a full-time driver. This season is a different chapter. Sheppard will be sporting No. 1 Mark Richards Rocket Chassis House Car and is out to prove his worth in the industry by competing with the best of the best, full time. With a commitment to the series and big boots to fill on the Rocket1 iron horse, fans will be sitting on the edge of their seats to see what damage this guy can do to the podium.

A tried and true badass in a racecar, Chris Madden, finally joins the dark side. Madden has appeared on the Outlaw stage countless of times with his first series win in 2006. His most recent series win was at the last race of the season, the 2016 Bad Boy Off Road World Finals which robbed Charlotte Motor Speedway of $12,500 and etched out the Outlaws on the track. The 2017 season marks Maddens first committed excursion with a series tour. They always say, “if you can’t beat ‘em, join ‘em” so let’s see what he’s got when every night’s a shootout with the Outlaws.

Holding the 2015 Rookie of the Year title and only one series win, don’t be fooled. Brandon Overton is a force to be reckoned with on the dirt and will give you one hell of a run for your money. With odds in the feature usually stacking against him, somehow, some way Overton finds his way to the front of the field. This season is set to be even more exciting than the past as Overton takes over Randy “Dream” Weavers 116 ride. In the off season, Overton and his new team have entered three races where they have finished on the podium all three times racking up one win and two third-place finishes.

Making his official debut on the Outlaw scene in 2016, Steve Casebolt  claimed 5 top-five and 15 top-ten finishes of 38 entered features ultimately finishing sixth in points. In 2016, Casebolt made his best run at Eriez Speedway he finished second. With a million-dollar smile and a charming personality Casebolt easily casts his spell over the hearts of spectators.

Coming out of essentially no where and swinging the pub doors wide open on the 2016 season, Tyler Erb had plenty of barstools turning around and people heads tilting. Erb’s improvement throughout the season has the barrel of his gun hot for the 2017 season. In 2016 Erb gathered one top-five and 10 top-10 finishes.

Devin Moran stems from a Late Model dynasty and shows great potential. In 2014, Moran claimed 18 feature wins at various tracks. He has been passed the No. 9 torch by Tye Twarog Racing and will be in the running for the 2017 Rookie of the Year title. At only 22years old, he already has a strong crowd of supporters behind him.

“Everybody obviously has a chance but Shane Clanton is a champion, Rick Eckert is a champion so they know what it takes. Then Chris Madden is a champion on many regional aspects so for him to go for the World of Outlaws title is going to make it tough. All of the guys that ran it last year like Frank Heckenast Jr., Billy Moyer Jr., Rookies Devin Moran and Donald Bradsher all of them are going to have a say in what happens in November at World Finals. I think there is going to be a different winner every night and the points are just going to be wild all year long. It ought to be one of the best point races since 2005 when Billy Moyer and Steve Francis tied for the points and Moyer won it on the tie breaker.”

“The crazy thing about this year is that it is as wide open as it has ever been and I think that’s a good thing. You have Brandon Sheppard standing into the Rocket House Car so you immediately put on of the best young drivers of the country on what is arguably the best team in the country. He’s for sure going to be in contention every single night. Then you have Shane Clanton who had an unbelievably good 2015 and a so-so 2016 and you know he is going to want to be able to bounce back. Then you add Chris Madden and Devin Moran to the tour who are really good as well. Honestly, I think anybody could win this championship. If I had to put a front runner on it I would say Brandon in the Rocket House Car is the favorite to win it but I think Clanton and Madden are nipping right at his heels.”

“I would say Shane Clanton, now with Josh Richards gone, is going to be the favorite but Brandon Sheppard is going to be tough too. Those are the two that it will be tough between. It’s just a matter of if Brandon Sheppard is experienced enough now on a national touring level to contend for the championship like Josh [Richards] did. I think if Brandon Overton commits to running the tour full time with his new team, he’ll be in the top three. He really improved last year but this year he has the equipment that will take him to the top three. The two new guys you are going to have to watch is Chris Madden and Devin Moran. Madden has never run a full tour before but he is an experienced guy. I also think Tyler Erb will win a race this year and Eric Wells was looking really good at the end of last year. It will be an interesting and competitive year really.”