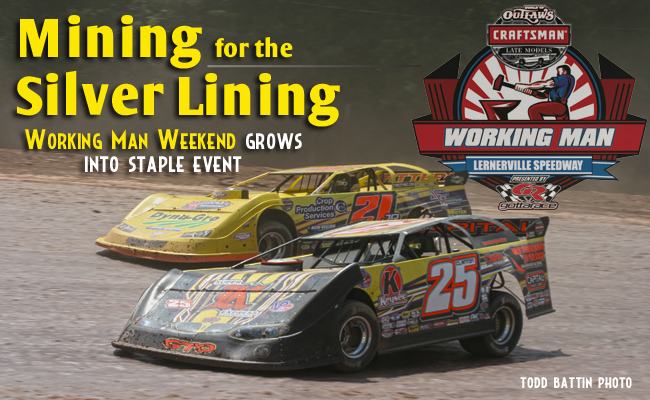 CONCORD, N.C. – August 22, 2016 – The World of Outlaws Craftsman® Late Model Series Working Man Weekend presented by GottaRace.com at Lernerville Speedway, originally created to fill the Labor Day racing void created when Tri-City Speedway closed its doors, has grown into something greater year over year. With a new format this year, and a $20,000-to-win feature, the race gives drivers of all ranks a level playing field to compete against each other, on a stage that draws fans far-and-wide.

When Tri-City Speedway closed its doors in July 2011, it left Pennsylvania gearheads stuck in neutral. The speedway offered local race fans a place to spend Labor Day weekend — and until the Tri-City Speedway reopened under new management – and a new name – in 2015, the holiday weekend left a void in the dirt racing community.

It also left a hole in the World of Outlaws Craftsman® Late Model Series schedule.

Meanwhile, the late model Firecracker 100 was becoming a blockbuster weekend at Lernerville Speedway, another Pennsylvania track (under the World Racing Group banner from 2005-2015), in June, along with a preceding spring show. But when the spring race was postponed in 2009, and added to the Firecracker weekend for a three-day thriller, the track was on the lookout for another big show.

In 2014, Lernerville Speedway teamed up with the World of Outlaws Craftsman® Late Model Series to fill the Labor Day void. The Working Man 50 was born.

“[Lernerville] is an exciting racetrack,” said longtime Outlaw and 2011 Series Champion Rick Eckert. “The racing there is some of the best in the country. Whenever we get to go to a place, where we can race all over it, that’s the kind of place we want to go to all the time.”

Lernerville Speedway General Manager Gary Risch Jr. and his team have worked hard to serve the community with the action-packed Working Man Weekend.

“Tri-City used to have a two-day event there every Labor Day, and when that event closed it was kind of a void in our area. We’re trying to build it back,” Risch said. “Lernerville has always been a sprint car track, and when we switched over to the late model side of it with the big Firecracker event, we made it into the crown jewel. It’s cool to see that the late models are strong, if not stronger than the sprint car deal there now.”

In 2015, in its second year, the Working Man became a two-day event when adverse weather conditions forced the postponement of the second preliminary day of the Firecracker earlier that summer. The multi-day event exceeded expectations and pulled racing fans from all across the state and beyond. The decision was made to transform the one-day, 50-lapper into a Labor Day weekend spectacular.

This season, Risch and his team have even higher expectations and want to offer fans the most fulfilling racing experience. This time track and series officials looked within the event, reworking the race format.

The finale on Saturday, Sept. 3 will host the 75-lap, $20,000-to-win feature, comprised of those who transferred from Friday’s qualifying features and Saturday’s Last Chance Showdowns.

Eckert is excited not just for the racing, but for the fans.

“[The new format] not only psyches the racers, but it also gets the fans out too,” the York, Pa. native said. “It’s pretty cool – a two-day deal. We haven’t done that before, so that’ll be a different deal. I don’t know anybody who’s not excited about going there. It’s good because it gives you 25 laps the day before, instead of 10-lap heat races, and it gives fans the opportunity to see different groups of cars. It should be good for everybody.”

Eckert is also excited for the payout. Last season, the feature was $10,000-to-win. The purse this year has doubled.

Risch said the Working Man has continued to grow as its own heavy-hitting show, which excites national, regional and local drivers. “But I think our local racers are most excited about it because it gives them the opportunity to shine on the national stage,” Risch said. “It does not have the Firecracker stage. It’s more the World of Outlaws and regional teams. It gives those guys a better opportunity of having the chance to win one of the qualifying events or even the 75-lapper.”