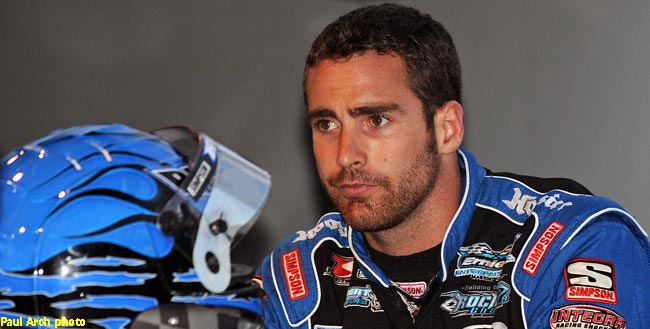 HE’S BACK: Josh Richards has watched from afar this season as Darrell Lanigan has supplanted him as the winningest driver on the World of Outlaws Late Model Series since 2004.

This weekend, though, Richards will return to the national tour that made him a star with hopes of dulling Lanigan’s domination – and maybe even reclaiming the number one spot on the alltime win list.

Absent from the WoO LMS since deciding in April to pursue a NASCAR career by running the Nationwide Series, Richards, 24, of Shinnston, W.Va., will drive one of his father Mark’s Rocket Chassis house cars in NAPA Auto Parts-sponsored events on Friday night (Aug. 17) at Winston Speedway and Saturday evening (Aug. 18) at Merritt Raceway. The pair of 50-lap, $10,000-to-win events in Michigan will mark Richards’s first WoO LMS starts since March 31 when he finished sixth in the Illini 100 at Farmer City (Ill.) Raceway.

“I’m looking forward to getting back out there and running some Outlaw shows,” said Richards, who captured one WoO LMS A-Main this season (Feb. 17 at Bubba Raceway Park in Ocala, Fla.) before moving south. “It’s been so long since I’ve been to an Outlaw race, so it’ll be fun to see everybody and do some racing with all the Outlaw guys.”

“I don’t expect to just come out here and whoop up on him,” Richards said with a smile when asked about Lanigan. “I hope we can be quick right out of the box, but with not being in a Late Model for this long a period, it may take a little bit to get everything figured back out. It does take time to get comfortable with your car and get all your adjustments figured out.

“That’s what Darrell’s been able to do this year,” he continued. “He has everything figured out. He hasn’t been changing a whole lot of stuff. He’s just been going out, week after week, with something he’s comfortable with, and he’s driving hard with a car that he knows what it’s gonna do.”

Richards admits to being awed by Lanigan’s spectacular season, which includes a single-season record of 13 wins (and counting), an enormous 170-point lead in the standings with 12 events remaining and $269,400 in earnings. Lanigan also now has 39 career wins, putting him one ahead of Richards on the alltime list.

“At first I was kind of bummed out,” Richards said when asked for his thoughts on being overtaken by Lanigan on the WoO LMS career win list. “Then I realized that it took me sitting out most of this year and for him to win 12 just to tie the record.

“It’s definitely been a Darrell Lanigan year. It’s awesome what he’s done. People can say what they want about the competition maybe being down from previous years, but he’s still been really, really good. It showed when everybody was there at Cedar Lake (Speedway in New Richmond, Wis., for the USA Nationals on Aug. 4) and he still whooped up on ’em (for a $50,000 victory).

“He’s been close these last couple years to winning races like this, so it was just a matter of time. In 2008 he only won two races but was way ahead in points. Now he’s been able to do both – win races and run away with the points. It’s just been an incredible year for him.”

Richards will compete this weekend as a Rocket Chassis house car teammate of Brandon Sheppard, the 19-year-old talent from New Berlin, Ill., whom Mark Richards tapped in May to replace his son. Richards will drive a car he steered to three WoO LMS victories last season while Sheppard will be behind the wheel of a brand-new machine that the Rocket crew built in the wake of Sheppard’s hard qualifying-heat crash on Aug. 3 at Cedar Lake.

And of course, Richards will race at two tracks that treated him pretty well last year. He won the WoO LMS A-Main at Winston after taking the lead early in the distance from Lanigan, who went on to finish fourth, and the next night at Merritt he placed fifth – one spot behind Lanigan – after battling his way forward from the 12th starting spot.

Richards, who chatted with Lanigan on Wednesday when the Kentucky driver stopped by the Rocket Chassis shop to pick up a new car, is especially enthused about defending his first-place laurels at Winston. He thoroughly enjoyed his march to the checkered flag there last year.

“I thought Winston was awesome,” said Richards, who is idle from NASCAR Nationwide Series action this weekend because he doesn’t have a ride for the tour’s road-course event at Montreal’s Circuit Gilles Villeneuve. “That place reminded me a lot of Attica, Ohio. I love both of those racetracks. It was just a lot of fun to race on.

“I don’t know what the conditions are gonna be this time or what the racing’s gonna be like because the tires will be a little different. We’ll be on the (DIRTcar Hoosier) LM tires this time, so I’m sure it’s gonna race a little differently. But I’m pretty excited to go there and see if we can do what we did last year.

“Basically, this will be a weekend to just go out and have fun,” he added. “There’s no pressure at all. We don’t have to worry about points or anything. We’re just gonna come in, go race and try to have some fun. Hopefully it goes well.”

HOPING TO REPEAT: Brady Smith has a perfect career record at Merritt Raceway. Keeping it intact, however, will be a tall order when he returns to the quarter-mile oval this Saturday night (Aug. 18) for the WoO LMS NAPA Auto Parts Merritt 50.

Smith, 35, of Solon Springs, Wis., might have swept last year’s inaugural WoO LMS program at Merritt, setting fast time, winning a heat race and dominating all 50 laps of the A-Main to capture his first victory in over a year on the national tour. But he knows duplicating that effort will be a major challenge – especially with a streaking World of Outlaws driver named Darrell Lanigan making life miserable for series regulars and invaders alike.

“I’m looking forward to going back (to Merritt),” said Smith, who will drive more than 500 miles – over 10 hours – from his northern Wisconsin home to compete in this weekend’s WoO LMS doubleheader in Michigan. “We were so good there last year and we’ve been running good this year since June or July, so I feel like our program is close to being where we want it to be. I don’t know if anybody’s program is good enough to run with Lanigan right now, but on any given night he can be beat and we’re gonna give it a shot.

“Lanigan has such unbelievable consistency right now wherever he goes, but I think we’re certainly good enough to compete if we hit everything right. On that (WoO LMS) Wild West (Tour) swing (last month) I felt like we were good enough to run with him a couple nights but just had bad (A-Main) redraws, so we’re confident.”

Smith’s sterling 2011 performance last year at Merritt stamps him as a driver with the chops to threaten Lanigan’s throne. He was simply unbeatable that evening, controlling the action in his first-ever visit to the northern Michigan facility. His victory marked the second time he won a WoO LMS event in his first start at a track, mirroring his 2008 score at Estevan (Saskatchewan) Motor Speedway.

“Merritt was just awesome for us,” said Smith, who owns four career WoO LMS A-Main wins (though interestingly, none came in 2009 during his lone season as a tour regular). “For some reason we were just dialed in all night. The track didn’t really remind me of any place I’ve run before, but I just felt really comfortable in the car right from the start of the night. We made the right choices with tires and car changes and just carried it through the whole night.

“It is neat when you can pull off something like we did last year, because it is a challenge to go to a place you’ve never been before and figure out the right set up and the different lines on the racetrack – especially when you’re competing against a real tough field of drivers like at a World of Outlaws show. Maybe we got a little lucky, but everybody gets lucky once in a while.”

Smith will enter his Team Zero by Bloomquist machine in this weekend’s action with a solid performance history on this year’s WoO LMS. He’s entered 13 events and started 12 A-Mains, with five top-five and eight top-10 finishes to his credit. He has a season-best finish of third, on June 29 at Lernerville Speedway in Sarver, Pa.; July 12 at Red River Co-op Speedway in Winnipeg, Manitoba; and July 13 at River Cities Speedway in Grand Forks, N.D.

THE TRAVELERS: The only WoO LMS regular who has previously won at either of this weekend’s Michigan tracks is Tim McCreadie of Watertown, N.Y., who captured the special ‘Who 55’ event at Merritt in 2008.

McCreadie didn’t have an enjoyable WoO LMS trip to the Wolverine State last year, however, placing 10th at Winston (after starting 23rd with a provisional) and 20th at Merritt (slid off the track on the final lap). He’s also been struggling recently on the tour, but his three victories this season ranks second to Lanigan’s lofty total.

Including Lanigan and McCreadie, nine of the 12 drivers who have entered all 30 events on this year’s WoO LMS competed in last year’s races at Winston and Merritt. Lanigan was the only Outlaw with a top-five finish in both events.

Defending WoO LMS champion Rick Eckert of York, Pa., registered finishes of third at Winston and 16th at Merritt (one of his worst outings of the ’11 season). Shane Clanton of Fayetteville, Ga., was fifth at Winston and sixth at Merritt; Tim Fuller of Watertown, N.Y., was sixth and 12th; Chub Frank of Bear Lake, Pa., was seventh at both tracks; Vic Coffey of Caledonia, N.Y., was ninth and eighth; Clint Smith of Senoia, Ga., was 21st and 11th; and Pat Doar of New Richmond, Wis., was 22nd and 13th.

Rookie of the Year contenders Bub McCool of Vicksburg, Miss., Kent Robinson of Bloomington, Ind., and Jack Sullivan of Greenbrier, Ark., have never raced at either track.

Fri., Aug. 17, at Winston Speedway in Montague, Mich.: Pit gates are scheduled to open at 4 p.m. and the grandstand gates will be unlocked at 5 p.m. Hot laps are set to begin at 6:30 p.m. with time trials to follow and the first race scheduled to hit the track at 7:30 p.m.

Tickets are $35 and include admission to the grandstand and an all-access pit pass.

For both events, fans can receive a $5 discount on general admission tickets by bringing a receipt from a NAPA Auto Parts store and presenting it at the ticket window.