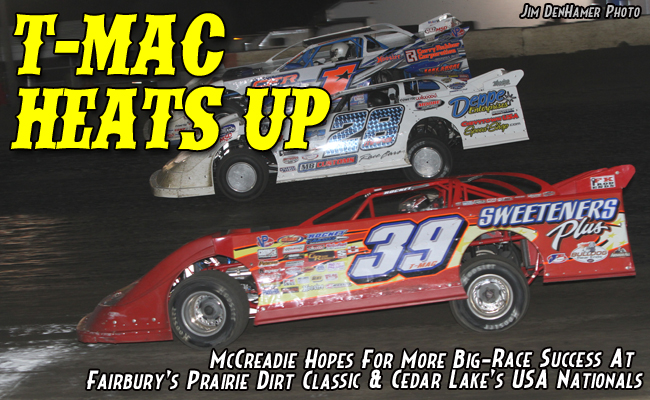 As the World of Outlaws Late Model Series gears up for two of its biggest races of the season, series veteran Tim McCreadie of Watertown, N.Y., just happens to be hitting his stride on the national tour.

McCreadie, the 41-year-old racer from Watertown, N.Y., hopes his recent surge on the WoO LMS will help him create another memorable performance or two like his charge from 17th to win last year’s Prairie Dirt Classic in dramatic fashion at Fairbury and his dominating performance in the second half of the 2013 USA Nationals that carried him to a career-high $50,000 payday at Cedar Lake.

“There’s something about Fairbury and Cedar Lake that just works for us,” said McCreadie, driver of the Sweeteners Plus Rocket Chassis, who currently ranks fourth in the WoO LMS points standings. “But it certainly helps to be running better heading into those races. We’ve kind of stumbled on something setup-wise that I feel has made us better the last four or five races.

“We’re excited and happy with the way things are going right now. When you’ve been struggling and you get to the other side, it always makes things easier and picks you up a bit.

When it comes to major events like the Prairie Dirt Classic and the USA Nationals, McCreadie usually finds a way to put himself in contention. But he says extra motivation when racing for bigger paychecks isn’t what helps him step up his game. Instead, he says, it’s the extra experience he has in major races that helps his cause.

“I don’t know if we really try harder or if it’s just because we have a lot of experience with these big races,” McCreadie said. “I think guys with experience know what they need to win a hundred-lapper. Even if their car’s bad on Friday night, when they have a whole night to think about it, they can usually dial themselves better. The best guys get good at doing that.”

While McCreadie’s more than seven seasons of experience as a WoO LMS national traveler certainly give him a leg up over much of the competition when it comes to big shows, he also benefits from his driving style’s strong fit at both Fairbury and Cedar Lake.

With his home base in New York, McCreadie doesn’t get to race at either Cedar Lake or Fairbury as much as he would like or enough to say he’s well-versed on the intricate characteristics of either track. But luckily for McCreadie, both tracks are similar to some of the New York ovals where he grew up racing.

“Fairbury to me is just like racing at some of the tracks back home,” said McCreadie, who as the son of legendary big-block modified driver ‘Barefoot’ Bob McCreadie got his start racing modifies in the Northeast before beginning the transition to Late Models in 2002. “It’s a track that has a lot of character with a huge cushion and a lot of traction on the bottom. When it’s like that, you’re able to maneuver and the fastest car usually goes to the front. It’s a lot like how I came up racing.

“It’s the same thing at Cedar Lake. It’s a place that might not start out exactly like what fits me, but at some point it slows down and really starts to fit my style. I think that’s why we’re pretty good at both Fairbury and Cedar Lake, and we typically run pretty good at those tracks no matter how we’ve been running everywhere else.”

With his recent improvement on tour, McCreadie doesn’t have to strictly rely on his strong fit at the two tracks to feel good about his chances at both Fairbury and Cedar Lake. His performance over the past two months shows his team is much better than they were to start the season.

After recording just three top fives while struggling through the year’s first 16 WoO LMS races, McCreadie has improved noticeably in the past eight events with four top fives, including his first series victory of the season at River Cities. That upswing has McCreadie even more excited to head back to both Fairbury and Cedar Lake.

“We’ve kind of stumbled on something setup wise that I feel has made us better the last few races,” McCreadie said. “It was good enough to win (at River Cities) and good enough that we’re qualifying better and running better in our heat races. Those are signs that we’re getting things better.

“We’re excited. When you’re on the other side of struggling, it always makes things easier. I feel like we’ve definitely pushed through a little. We’re not quite where we want to be, but hopefully we’re close enough that we’re in the hunt in these big races coming up.”

The Midwestern trip features two additional WoO LMS races, with the tour set to make its first ever visit to Quincy (Ill.) Raceways on Thurs., July 22 for the inaugural Workforce 40. For more information on Qunicy Raceways visit www.quincyraceways.com. On Tues., July 28, the WoO LMS makes a stop at Shawano (Wis.) Speedway for the Sun Drop Shootout. The mid-week event features another full slate of WoO LMS action at the half-mile fairgrounds oval. More information is available at www.shawanocountyfair.net.