Mars/Bloomquist Face Off At Cedar Lake 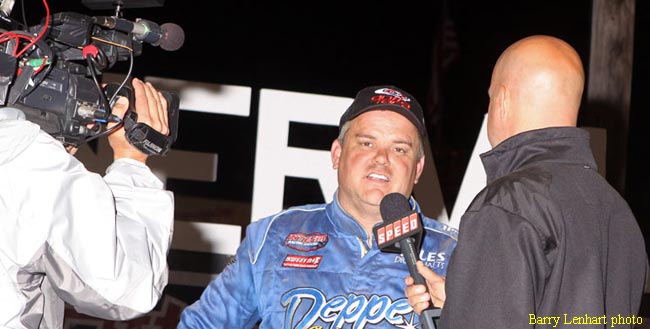 NEW RICHMOND, WI – Aug. 3, 2011 – Jimmy Mars has a pretty good idea what people will be talking about when he rolls into the pit area at Cedar Lake Speedway this weekend (Aug. 4-6) for the 24th annual USA Nationals presented by U.S. Steel.

It’ll be something to do with Mars and Scott Bloomquist facing off…right, Jimmy?

“Yeah,” smiled Mars. “I would imagine that will be a big topic of conversation.”

Mars, 39, of Menomonie, Wis., was finally vindicated on July 13 when WoO LMS officials announced that his tires had not been illegally altered and declared him the winner of the Firecracker 100. The Mars-Bloomquist discussion then died down, but it will certainly roar back to life this weekend when Mars crosses paths – and likely races side-by-side – with the man who protested him.

For his part, the low-key Mars has pledged to pay little mind to his Cedar Lake reunion with Mooresburg, Tenn.s’s Bloomquist. His comments on the SPEED television broadcast of the Firecracker 100 and on DirtonDirt.com detailed his feelings about Bloomquist and made it clear that he won’t let the legendary dirt Late Model driver get in his head.

“I know who he is and what he’s like,” Mars said of Bloomquist, “and I am who I am. We just come to race. There’s going to be a lot more people to worry about (at Cedar Lake) than just him.”

Mars and Bloomquist, of course, will be two of the favorites to capture the lucrative top prize in Saturday night’s 100-lap USA Nationals headliner. Mars is a two-time winner of the event while Bloomquist owns a record-tying five USA Nationals victories, including a dramatic, survival-of-the-fittest triumph in last year’s edition of the race.

The USA Nationals ranks as one of the most important, highly-anticipated events on Mars’s annual racing schedule. The speedway, after all, sits less than an hour’s drive from his home and he’s won plenty of features there during his career.

“I’ve had a lot of success, had a lot of fun and done a lot of cool things up there,” Mars said of Cedar Lake Speedway. “We’ve won the Topless (100 in Batesville, Ark.) twice, the Firecracker 100 twice, the Dream (at Ohio’s Eldora Speedway), the North-South (100 at Kentucky’s Florence Speedway) – a lot of big races – but our two USA Nationals wins definitely are special to me. The track is right close to home where I grew up and I watched all the big guys come in there and race when I was a kid, so every year I get excited about having the chance to be involved in it.

“I’ll never forget winning my first one,” he continued, thinking back to his $29,000 triumph in the 1996 USA Nationals. “It was one of my biggest career wins at that point. In my book it was my first crown-jewel win, so it was pretty cool to do it close to home with my family and friends watching.”

“I definitely know how hard it is to win it,” said Mars. “The first time I won it I was kind of a punk kid and just thought, ‘Hey, it’s a big race. I won it. Cool. Let’s drink some beer.’ I didn’t really realize how tough it was to win one of those races – until it took so long to win it again.

“Thirteen years between wins is a long time. I mean, so many things changed in my life between 1996 and 2009 – I got married, I had two kids, I got a pretty good-sized manufacturing deal going with our race cars and stuff.”

Mars made a run at a third USA Nationals checkered flag last year, leading laps 32-59 before an overheating engine forced him to pull off during a caution period. He settled for a 14th-place finish.

“The (temperature) gauge was trying to come around for some more,” Mars said of his car’s overheating condition caused by a radiator that became caked with mud. “I pulled in before something could happen to the engine. It was just kind of a heartbreaker because I felt like we had one of the cars to beat.”

Mars will attempt to erase memories of last year’s disappointment during this weekend’s USA Nationals spectacular, which kicks off on Thurs., Aug. 4, with a $5,000-to-win Cornbelt Clash Series program before continuing with WoO LMS time trials, heats and a dash on Fri., Aug. 5, and last-chance events and the 100-lapper on Sat., Aug. 6. He will bid to join Bloomquist and Billy Moyer as only the third three-time winners of an event he raves about to anybody who will listen.

“It’s pretty laid back weekend, especially if you’re into just kicking back, having a few beers and enjoying some great racing,” said Mars. “It’s definitely unique compared to some of the races we go to. I think it’s turned into more of an event instead of just a race.

“But it’s pretty cool for the fan aspect,” he added. “It’s kind of got a little of the Monster Jam-type-intro thing to get the crowd revved up. I think tracks with race deals like the USA Nationals need to do that kind of stuff more to get everybody excited.”

The 2011 USA Nationals weekend will also feature complete shows each night for Cedar Lake’s NASCAR Late Models with the winners walking away with $2,500.

Plenty of off-track activities will give once again give the USA Nationals a more-than-just-a-race feeling. Cedar Lake officials will accent the racing with an exciting array of pre- and post-race entertainment, including a Saturday-morning golf scramble at the nearby New Richmond Links Golf Course; a Ladder Ball competition in the wooded camping area at 12 noon on Friday; the popular Apple River Tubing expedition during the afternoons before the races; the ‘FansFund’ Luncheon on Saturday afternoon that allows contributors an opportunity to meet the drivers they helped bring to the USA Nationals; a driver autograph/meet-and-greet session prior to Saturday night’s first green flag; go-karts in the backstretch parking lot; and the ‘Party in the Pits’ under the Big White Tent following the Thursday and Friday programs.