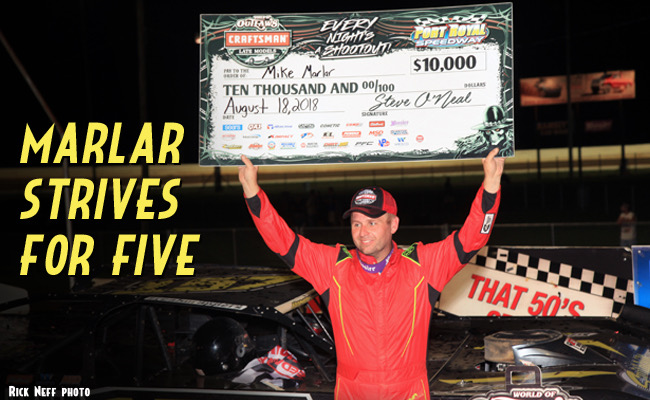 PORT ROYAL, PA – August 18, 2018 – Being that it’s his first full year on the World of Outlaws Craftsman Late Model Series tour, it makes sense that there’s a few tracks on the schedule where it’s fair to say Mike Marlar is not the most experienced driver in the pit area. Prior to Saturday night’s event, Marlar had never raced at the Port Royal Speedway. But he walked out of the night a winner – something not a lot of drivers can say they’ve done the first time they visited a new racetrack.

Marlar began the night with a blazing fast time trial lap of 17.544, won heat race number three and re-drew on the outside of row two. Within four laps of the drop of the green, the Winfield, Tennessee, native jumped to the lead and began pulling away from second-place driver Brandon Sheppard and the rest of the field.

Marlar led until just inside of ten laps remaining, when he approached the rear bumper of a slower car down the backstretch.

“Everything was going good until I came up on that lapped car,” Marlar said of the incident. “I thought he was going to go through the middle and he kind of slid up in front of me and it took the air off [of the car’s nose]. This place is so big and high-speed that it nearly wrecked me.”

Marlar’s car suddenly broke loose and slid up the track into the outside retaining wall. The level of contact was nothing major, but he did lose a 1.5-second lead over Sheppard in the process.

Try as he might have, Sheppard just couldn’t make up the gap in time, despite a caution coming out with four laps to go.

Marlar said he actually sustained a bit of damage after the contact, bending the right-front portion of the bumper down, causing it to drag on the racing surface throughout the remainder of the race.

But he kept the car under control and parked it in Victory Lane for his fifth win of the 2018 season and seventh on the all-time wins list.

Brandon Sheppard drove across the stripe in second – a much-needed podium finish to stay in the thick of the points battle. The defending Series Champion said he was happy with second, but knew there was room to get by Marlar.

“Mike got to the lead before I did and that pretty much set the tone for the race,” Sheppard said. “I had a few opportunities to get underneath of him, but I just couldn’t quite get him cleared the way I wanted to.”

Sheppard was a number of car-lengths back when Marlar hit the turn three wall, which may have been the out Marlar needed to keep the lead. Sheppard said he knew when he saw it happen that it was a great opportunity to make the pass, unfortunately it just didn’t happen.

“I was thinking that was my opportunity, but I had already committed lower than I needed to be to make something happen,” Sheppard said.

Devin Moran completed the podium to score his 18th top-5 of the year, and it did not come easy. Coming from the 10th starting spot, Devin battled high and low to make passes for position, even with a super fast and tacky racing surface.

“Staring 10th on a track that’s super fast makes it tough in a 40-lap event,” Moran said. “Port Royal [officials] did a great job with the track. With all the rain they had earlier, they worked out as much as they could and they gave us a racy track.”

Other race notes – Rain clouds settled in over the Juniata County Fairgrounds early on in the event, pushing the schedule back two whole hours before hot laps began. This put a ton of moisture into the track’s surface, making for very tacky and fast racing.

A healthy field of 36 Outlaw Late Models took time on Saturday night, representing the good car counts that were expected for the Pennsylvania Trifecta.

There were a solid bunch of wrecks throughout the evening in both 410 Sprint Car and Late Model action, but none worse than Bryan Bernheisel’s collision with Rick Eckert, Shane Clanton and Austin Hubbard on the backstretch out of turn two. Eckert dropped a drive shaft in corner exit and slowed, causing a chain reaction that ended up sending Bernheisel onto his roof. Everyone involved walked away just fine; their cars, however, did not.

Next stop…
The Outlaws will wrap up the four races, four days weekend in Erie, PA today at the Eriez Speedway. Josh Richards is the all-time tour leader in wins at this track with four (2007, 2010, 2015, 2016). Brandon Sheppard won the race last year; look for him to carry that success back in from last year this Sunday. More event info can be found at http://www.eriez-speedway.com/