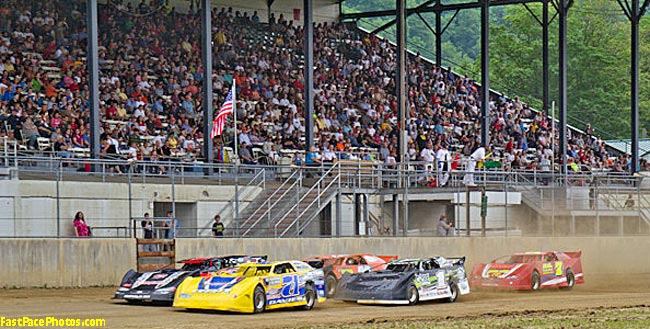 The New York track’s 50-lap, $10,000-to-win event replaces the WoO LMS program that had previously been scheduled for the same date at McKean County Raceway in East Smethport, Pa.

“All of us with the World of Outlaws Late Model Series are looking forward to visiting Little Valley Speedway for the first time,” said tour director Tim Christman. “Circumstances are preventing us from returning to McKean County Raceway this season, but competing at Little Valley Speedway will allow us to bring the stars and exciting action of the World of Outlaws Late Model Series to the great motorsports fans in New York’s Southern Tier and the northern portion of western Pennsylvania.”

Owned and operated by the Cattaraugus County Agricultural Society, Little Valley Speedway is a half-mile oval that sits on a historic, well-maintained fairgrounds property. The facility is located just over an hour’s drive south of Buffalo, N.Y., and about 30 minutes north of Bradford, Pa.

While auto races were first held on the oval in 1932, the speedway did not operate consistently for many years. The track was improved dramatically with modern walls, new fencing and a refurbishment of the 3,000-plus seat covered grandstand for the 1997 racing season and it has hosted an annual special-event schedule each year since then.

No race at Little Valley has been as high-profile and lucrative as the WoO LMS event promises to be on Aug. 29. The blockbuster show will create a buzz-worthy evening of competition at the down-home, small-town track.

“Everyone here at Little Valley Speedway is excited and pleased to have the World of Outlaws Late Model Series participating on our half-mile dirt track this year,” said John Charlesworth, the president of the Cattaraugus County Agricultural Society Board of Directors. “This partnership will bring great racing to the area along with our other classes of loyal racers. The board and myself hope everyone can join us for this spectacular event.”

In addition, veteran racer Ron Davies of Warren, Pa., who followed the WoO LMS in 2011 and finished second in the Rookie of the Year points standings, owns several feature wins at Little Valley, including two last year.

The mid-week Little Valley event, which will also include racing for the BRP CanAm 360 Late Model Series and the E-Mod division, is part of a 2012 WoO LMS schedule that currently lists 49 race dates comprising 44 A-Mains at 35 tracks in 20 states and three Canadian provinces.

More information on the inaugural WoO LMS stop at Little Valley Speedway can be obtained by logging on to www.littlevalleyspeedway.com or calling 716-938-9146.

The next action for the WoO LMS is the $20,000-to-win ‘Illini 100’ on March 30-31 at Farmer City (Ill.) Raceway. Advance tickets are available for purchase at www.worldofoutlaws.com/tickets.