LIFE ON THE ROAD: Gustin and crew move forward through grueling World of Outlaws schedule 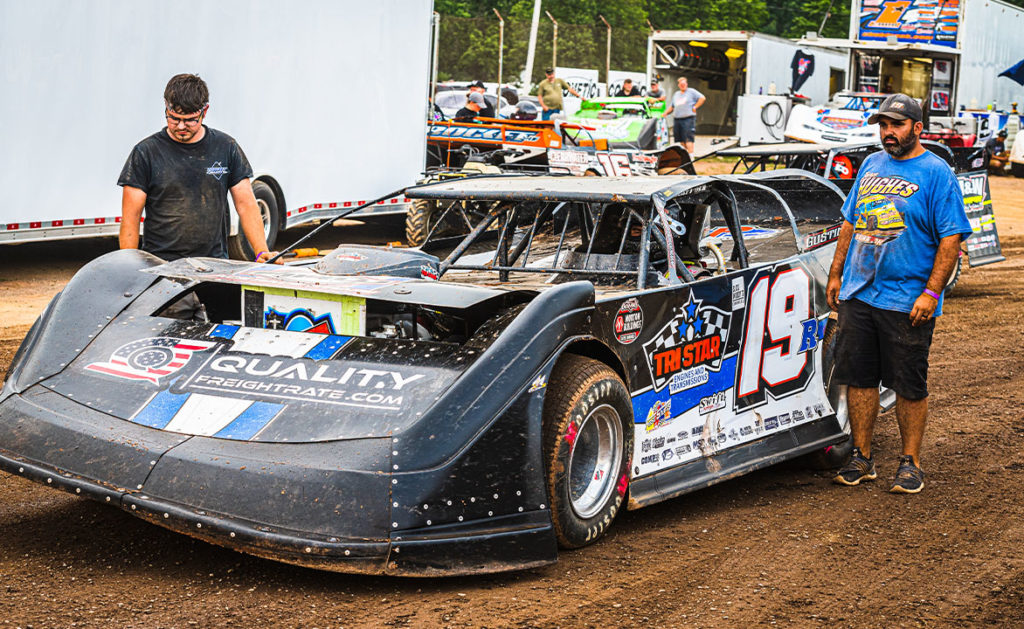 The Marshalltown, IA driver is seventh in the Series standings

Albert Einstein once said, “Life is like riding a bicycle. To keep your balance, you must keep moving.”

When a new team joins the World of Outlaws Morton Buildings Late Model Series, keeping that balance is tough throughout the grueling schedule.

Ryan Gustin, from Marshalltown, IA is on his maiden voyage with the World of Outlaws, and he’s learning what it takes to keep up with his competitors. But he’s not the only one gaining knowledge. It’s also a learning curve for his crew.

Crew Chief Bret Ladehoff and Tire Specialist Noah Bushman are the two crew members who travel with Gustin across the country. While the World of Outlaws are a new venture for the team, a national travel schedule isn’t.

Gustin’s time running United States Modified Touring Series – which spans from Texas to Iowa to Minnesota – prepared him for his rookie season.

“It’s a lot of traveling but so is USMTS stuff and any national tour you put a lot of miles on,” Gustin said. “It’s just a lot of new racetracks and we haven’t had hardly any laps around a lot of these tracks we’ve been to.”

The prior experience running a national tour allowed Gustin’s team to hit the ground running with the Late Model.

“We’re not close to home but we’ve done it long enough that we’re used to being away from home for an extended period of time,” Ladehoff said. “That’s the nice thing is that we didn’t jump into this feet first and not really knowing what we’re getting ourselves into.”

While traveling isn’t new to them, the crew still needed to make some changes around the shop. One of those changes is sticking to a routine to make sure certain jobs are done.

“There’s a lot of things that are definitely different about what we do here,” Ladehoff said. “The one thing we’ve all kind of gotten together on is a set schedule for what we do. I’ve got a set schedule of what I do with the car every day.”

One step of the process is making sure they don’t run into problems at the racetrack. Ladehoff’s goal every time he touches the car is to point Gustin in the right direction.

“I try to give him a car that’s not going to fall apart, something he can go out there and trust,” Ladehoff said. “That’s the big thing if he can trust the car, he’ll be better in it.”

The work doesn’t end with fine-tuning the setup. One of the new learning experiences is tires, and it’s been a teaching moment for Bushman who’s been learning on the fly.

“It’s a lot to do and the compounds are different,” Bushman said. “Some of them I’ve never even cut up before so it’s basically a shot in the dark, but I’ve got it figured out now and it’s going pretty good.”

Even though the team is starting to find a rhythm, the crew knows they must hit their marks in the pits and on the track.

“In the modified, [Gustin] could kind of horse it around if [the car] wasn’t right and make it work,” Ladehoff said. “With these things everybody’s good so you have to be on top of your game every night.”

“It’s a lot more work and everything that you do you have to make sure it’s right and have your ducks in a row when you show up,” Bushman said.

While having the right setup is important to beat their competitors, the team enjoys the comradery they have with the other drivers.

“It’s a blast, you learn a lot and it makes you be better,” Ladehoff said. “At the end of the day we all want to see everyone get out there and race so if there’s something that we have, and somebody needs it and vice-versa we try to help everybody out.”

Although the first year on tour’s been fun for Gustin he’s still looking toward the future.

“We just hope to get this year out of the way,” Gustin said. “We’ll hopefully get rookie of the year, get a year under our belt, and have a notebook built for a lot of these tracks we haven’t been to before for next year.”

Gustin has a hill to climb if he wants to be the Series’ top rookie. He’s 136 points behind Tyler Bruening with 28 races to go. He’s also seventh in the overall championship standings with four top-fives and 12 top-10s in 23 starts — 352 points behind Brandon Sheppard.

No matter how they finish the season, Gustin and his crew are showing they’ve have found the perfect balance with the grueling Series schedule. They just keep moving.

The next stop for the World of Outlaws Late Models is a doubleheader at Jackson Motorplex in Jackson, MN July 9-10.