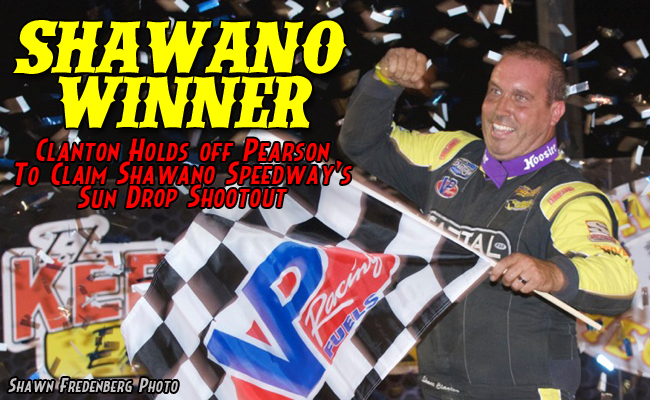 SHAWANO, Wis. – July 28, 2015 – The results will show that Shane Clanton led every lap of Tuesday’s Sun Drop Shootout at Shawano Speedway to win from the outside pole, but the victory certainly didn’t come easy for the World of Outlaws Late Model Series points leader.

Scoring his ninth WoO LMS victory of the season, Clanton, 39, of Zebulon, Ga., survived repeated challenges from Earl Pearson Jr. of Jacksonville, Fla., amid heavy lapped traffic during the second half of the 50-lap race to earn a $10,550 payday at the half-mile oval.

“I saw Earl coming and I got to where I couldn’t steer through the middle,” said Clanton, who drove his Capital Race Cars house car to his 23rd top-five finish in 27 WoO LMS A-Mains this season. “I had to get up on the wheel and win this one for us.”

Pearson settled for second after a mistake on lap 47 allowed Clanton to pull to a 1.872-second advantage at the finish. Sixth-starting Jimmy Mars of Menomonie, Wis., was third followed by ninth-starting A.J. Diemel of Elk Mound, Wis., in fourth. Josh Richards of Shinnston, W.Va., finished where he started in the fifth spot.

Clanton lead the first half of the race mostly unchallenged as Pearson and Mars battled for the second spot. But following the race’s final caution on lap 26, Pearson cleared Mars for good and began to pressure Clanton.

With Clanton’s car drifting high exiting the corners, Pearson kept glued to the low groove and made multiple looks underneath the leader. Pearson nearly pulled even with Clanton at the completion of lap 37, setting off a five-lap stretch in which the two drivers ran side by side nearly the entire distance as the diced their way through traffic.

After his low-side challenge came up short, Pearson switched to the high groove and again made challenges for the lead. But his run was slowed on lap 47 when he drifted too high in turns one and two and nearly tagged the wall. The mistake allowed Clanton to pull away to the 29th WoO LMS victory of his career.

“We had to get back up on the wheel in the last 10 laps there, but I wasn’t about to give it up,” Clanton said. “I think he caught me the most when we got to lapped traffic. They would mess my line up so much going into the corner that he could get a run leaving the bottom.”

Making his fifth WoO LMS appearance of the season, Pearson was looking to earn his first series victory since 2009. While he fell short of ending that lengthy WoO LMS drought, Pearson was happy with his runner-up performance after struggling in recent appearances in his part-time ride in the Moring Motorsports Black Diamond Race Car.

“It took me a little while to get up there to (Clanton), but we ran side by side with him there a bunch of laps and put on a pretty good show for the fans,” said Pearson, who rebounded from the disappointment of missing the A-Main lineup at Fairbury (Ill.) American Legion Speedway’s Prairie Dirt Classic on July 25. “I wish I could’ve went on by him and won the race for these guys because they work their butts off.

“We had a good car here with Larry Moring, Ronnie Stuckey and all the guys on the crew. After last weekend, we’re definitely excited about this here. We’ll take second place and go on to Cedar Lake.”

After advancing from his third-row starting spot up to second in the first half of the race, Mars had his sights set on challenging Clanton for the lead until a resurgent Pearson muscled his way back into second following the lap-26 restart.

As Pearson went back ahead, he and Mars made contact, causing front-end damage that Mars said slowed his MB Customs machine.

“I guess me and Earl were going for the same real estate,” Mars said. “I thought I was on the bottom, but whatever.

“That kind of knocked the toe out quite a bit. We got third, but I’m happy with that when we have about a foot of toe-out.”

Gregg Satterlee of Indiana, Pa., was the race’s biggest mover in charging from his 20th starting spot to finish sixth. Rick Eckert of York, Pa., moved up from 13th to finish seventh. Seventh-starting Mitch McGrath of Waukesha, Wis., climbed as high as fourth early in the race before slipping back to eighth.

Darrell Lanigan of Union, Ky., survived heavy contact with Richards midway through the race to finish eighth, while Morgan Bagley of Longview, Texas, advanced from 15th to round out the race’s top 10 finishers.

Brandon Overton of Evans, Ga., was scheduled to start from the pole after posting fast time and winning his heat race, but the WoO LMS rookie contender suffered a flat left-rear tire on the parade lap. He pitted for a new tire before the race went green but was forced to start from the tail of the field. He recovered to finish 14th.

The race was slowed by five cautions, with the first appearing when Rodney Sanders of Happy, Texas, slowed on lap 10. The yellow flag waved for the second time when Mason Zeigler of Chalk Hill, Pa., went for a spin in turn four on lap 14.

After Jordan Yaggy of Rochester, Minn., slowed to cause a lap-21 yellow, Lanigan and Richards tangled on the back straightaway on the restart with the right front tire of Richards’ machine climbing the left-rear corner of Lanigan’s. The two cars were briefly hooked, forcing a caution to be called. The two machines separated in time for both drivers to maintain top-10 positions by virtue of the WoO LMS blend rule.

The final caution appeared with 26 laps complete after a car back in the pack clipped an infield tire and pushed it onto the racing groove.

WoO LMS competitors head next for Cedar Lake Speedway in New Richmond, Wis., for the 28th annual USA Nationals Thursday through Saturday. With its $50,000 winner’s paycheck, the crown jewel event marks the highest paying WoO LMS event of the season.