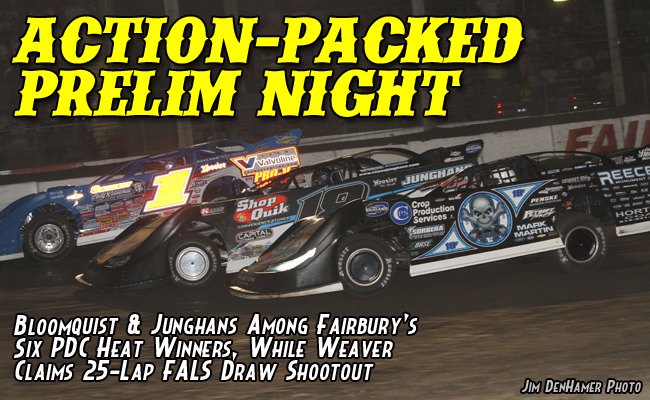 Racing at the popular quarter-mile oval for the first time in more than 13 years, Bloomquist, 51, of Mooresburg, Tenn., was among the top qualifiers for the blockbuster two-day event and won the second of six 15-lap heat races to claim a spot in the Top Six Redraw for Saturday’s 100-lap, $26,000-to-win A-Main.

“It’s good to be back,” said Bloomquist, whose last visit to Fairbury was for a DIRTcar UMP Summernationals event in 2002. “We hadn’t been up here in a long time. We took this weekend off last year because we hardly ever get a chance to take off. By popular demand, we had so many requests for us to come up here that we decided to get up here.”

Bloomquist will be joined in the Redraw on Saturday by fellow heat winners Chase Junghans, Dennis Erb Jr., Mason Zeigler, Billy Moyer Jr. and Billy Moyer as they all look to take the pole position for the Prairie Dirt Classic finale.

Friday’s action was also memorable for the impressive performance by home-state driver Kevin Weaver of Gibson City, who set fast time in qualifying and later finished second in the first heat race to earn the seventh starting spot for Saturday’s A-Main.

The 52-year-old Fairbury fan-favorite closed out the PDC preliminary night action by leading every lap of the 25-lap #FALS Draw Shootout to score a $5,000 unsanctioned victory.

Weaver’s flag-to-flag victory – which ranks as his richest payday of the 2015 season – won’t factor into his starting position for Saturday’s PDC A-Main, but it gave the veteran racer plenty of confidence as he sizes up the task before him on Saturday.

“Coming here and having fast time against the competition we had tonight, that’s real good for us and gives us a boost going into tomorrow night,” said Weaver, whose #FALS Draw Shootout victory came over Brandon Sheppard and WoO LMS points leader Shane Clanton. “We would’ve liked to have won the heat, but we were close. We’re still starting seventh, so that’s not all that bad.

“I feel like we have a pretty good hot rod. We were kind of relying on the cushion a little bit (in the Shootout), but if I needed to come off of it, I felt like I could’ve and still been fast. I felt like the car is capable of running down there in the slick a little bit and we can be pretty good wherever we need to run tomorrow.”

The #FALS Draw Shootout was a unique addition to this year’s PDC weekend. The invitational race featured an 18-car field, with a mix of drivers from the national level, some based in Illinois and a handful of Fairbury regulars. Each of Friday’s six heat race winners were also locked into the race. The lineup for the event was determined by a unique format that had drivers draw a starting position, then give that spot to another driver.

Continuing his improved performance this summer, Junghans of Manhattan, Kan., outdueled Weaver in an early back-and-forth battle in the first PDC heat race before a lap-three caution put him out front for a restart. He held on from there to win by 0.296 seconds. Weaver settled for second while WoO LMS Rookie of the Year competitor Brandon Overton of Evans, Ga., edged Morgan Bagley of Longview, Texas, in a photo finish for the third and final transfer spot.

Bloomquist’s Heat Two victory was anything but easy thanks to constant pressure from fellow Lucas Oil Late Model Dirt Series regular Jonathan Davenport of Blairsville, Ga. After advancing from his sixth starting spot, Davenport made multiple bids to take the lead late in the race with looks both high and low. But Bloomquist turned back each challenge in winning by 0.253 seconds. Brandon Sheppard of New Berlin, Ill., was third.

Erb of Carpentersville, Ill., took advantage of Tim McCreadie’s bout with the cushion to retake the lead on lap 11 of the third heat race and pulled to a lead of 1.731 seconds by the finish. McCreadie of Watertown, N.Y., who outdueled both Erb and Jimmy Owens of Newport, Tenn., to take the lead early in the race, recovered to finish second, while Owens held off Gregg Satterlee of Indiana, Pa., to take third and also A-Main transfer.

Heat Four featured a bit of drama on lap five when Zeigler of Chalk Hill, Pa., drove hard into turn three at the same time leader Shane Clanton was moving lower on the track. The two cars made contact and both turned sideways before straightening and continuing running. Zeigler corrected quicker than Clanton and was able to pull ahead on the following lap.

Clanton took a few looks to the outside of Zeigler through the second half of the race, but Zeigler pulled away late to win by 1.303 seconds. Clanton was second with sixth-starting Josh Richards of Shinnston, W.Va., third.

Moyer Jr. of Batesville, Ark., turned back challenges from a pair of WoO LMS regulars in winning Heat Five, with both fifth-starting Frank Heckenast Jr. of Frankfort, Ill., and Chub Frank of Bear Lake, Pa., making bids for the lead. But Moyer moved up the track just in time to stymie Heckenast’s high-side charge, then moved back down to the track’s low groove to hold off Frank in the closing laps. Moyer Jr. crossed the finish line 0.808 seconds ahead of Frank, who narrowly edged Heckenast for second.

Moyer Sr. scored the most convincing heat race victory, leading every lap of the sixth and final heat race to win by 1.902 seconds. Eric Smith of Bloomington, Ill., was a solid second, while Torin Mettille of Cullom, Ill., outdueled hometown driver Scott Bull and Kyle Hammer of Clinton, Ill., to claim third and also transfer to the A-Main.

A banner field of 64 Super Late Models entered the event, setting a new record high car count for a Late Model event in Illinois. Weaver topped time trials with his lap of 12.737 seconds in Group A. Clanton was fastest in Group B at 12.782 seconds.

Saturday’s PDC finale is scheduled to begin with hot laps at 5:45 p.m. Two WoO LMS Last-Chance Showdowns will lead off the Late Model portion of the action, with the 30-lap Prairie Dirt Shootout for non-qualifiers and the 100-lap feature to follow. The slate also features the final round of the DIRTcar Summit Modified Nationals.