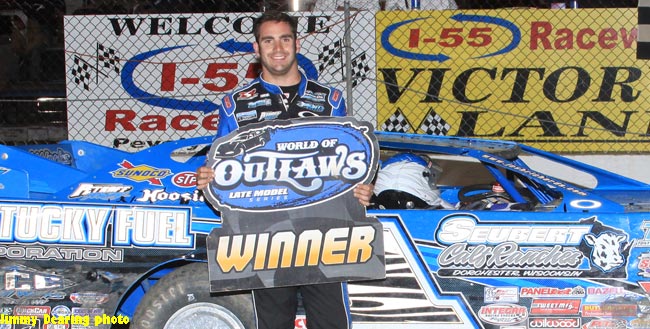 PEVELY, MO – Sept. 17, 2011 – Josh Richards continued his assault on the World of Outlaws Late Model Series record book – and the top spot in the points standings – with a convincing victory in Saturday night’s 29th annual Pepsi Nationals at I-55 Raceway.

The national tour’s two-time defending champion was flawless in the 55-lap A-Main. He roared off the outside pole to grab the lead at the start and never looked back, controlling the entire distance without facing a single serious challenge.

Richards, 23, of Shinnston, W.Va., beat fourth-starter Darrell Lanigan of Union, Ky., to the finish line by 1.635 seconds. It was his eighth win of the season, breaking him out of a tie with Lanigan for top-winner status on the series in 2011.

DIRTcar UMP star Jason Feger of Bloomington, Ill., placed third, over three seconds behind Richards at the finish. Chub Frank of Bear Lake, Pa., charged forward from the 11th starting spot to place fourth – despite racing with a broken right thumb suffered on Sept. 10 in a heat-race tangle during the World 100 at Ohio’s Eldora Speedway – and Jimmy Mars of Menomonie, Wis., was fifth.

Richards earned $10,875 for a score that moved him within one triumph of matching both the single-season WoO LMS record of nine established in 2004 by Scott Bloomquist and the tour’s alltime victory standard. Already the winningest driver of the circuit’s ‘modern’ era (2004-present) with 36 checkered flags, Richards is one win from tying Billy Moyer atop the alltime win list that includes the tour’s original 1988-89 campaigns.
{vimeo}29210132{/vimeo}
Adding even more significance to Richards’s success, he inched closer to points leader Rick Eckert of York, Pa., in the WoO LMS points standings. With Eckert, who has led the battle for the tour’s $100,000 title since early May, settling for a sixth-place finish, Richards shaved 12 points off his deficit to leave the high-banked, one-third-mile oval trailing Eckert by just 16 markers with five events remaining on the 2011 schedule.

“I’m very grateful for that,” Richards said of his opportunity to make WoO LMS history. “No matter what happens, I feel like we’ve had a great year. To still be there in the hunt and have a shot at (the championship) really means a lot to me and really shows how strong our team is.”

Richards registered his first-ever win at I-55, a speedy bullring promoted by NASCAR veteran Ken Schrader and Mike Marler that he called “a mini-Eldora.” He mastered the track behind the wheel of his father Mark’s Rocket Chassis house – though he had some doubts at the start.

“Whenever we lined up on the front row, I looked over and saw (polesitter Randy) Korte had some softer tires on than us,” said Richards, who has four of the last six WoO LMS A-Mains. “I was kind of nervous because we kind of gambled on tires a little bit. We didn’t really know what to do.

“I was trying to get some heat in my tires, and (then) we fired off on the start and got to the lead. Everything worked out for us.”

Four caution flags between laps 10 and 22 slowed Richards’s pace, but he easily pulled away on each restart. His biggest obstacle was negotiating heavy lapped traffic during the 33-lap run of green-flag racing that closed the race.

“My car was awesome tonight,” said Richards, whose machine was powered by a Roush-Yates Ford engine. “I was able to maneuver and have the car to be able to keep the momentum up to get by the lapped traffic. That was definitely key to winning tonight.”

“Our cars were pretty close, pretty equal,” said Lanigan, whose last WoO LMS victory came six races ago, on Aug. 3 at Shawano (Wis.) Speedway. “He was a little bit better in (the turns) because I was a little bit tighter, but there wasn’t much difference.

“He just got through lapped traffic a little better than I could. Right when I started to get closer to him he got by a couple (lapped) cars quicker than I did and I got stuck back there behind them for a few laps.”

The 33-year-old Feger, meanwhile, was able to climb as high as second after passing Lanigan on lap 16, but he lost the position to Lanigan on a lap-22 restart and ran in third for the remainder of the distance. He held off a late bid from Frank to record his fourth top-five finish in 12 A-Mains starts on the 2011 WoO LMS.

Feger felt fortunate, however, to preserve a third-place finish. He struggled throughout the race with an ill-handling Pierce car.

“I don’t know if we had a rack going bad or what, but it felt like my steering was coming in-and-out,” said Feger, who started third. “I had my hands full just trying to keep it out of the wall and from spinning out. I had to try to anticipate the car, so I had to drive it a lot more sideways than I would’ve liked to just to make sure it would turn.”

The event’s four caution flags were all caused by minor problems. Mark Voigt of Marine, Ill., slowed on lap 10 after tagging the wall; 18-year-old Brandon Sheppard of New Berlin, Ill., fell off the pace on lap 12 with front-end damage sustained in a scrape with Nick Lyons of Centralia, Ill.; Korte slowed and retired on lap 14 after slapping the wall while running seventh; and Lyons slowed on lap 22 with a heavily damaged rear spoiler.

Heat winners were Babb, Lanigan, Richards and Shirley. The B-Mains were captured by McCreadie and Clint Smith of Senoia, Ga.

The program was completed despite being a day-long threat of rain. While showers struck just south of the track, only a few brief spits of drizzle fell at the speedway.

The next action for the WoO LMS will come on Thurs., Oct. 6, when the tour visits Rolling Wheels Raceway Park in Elbridge, N.Y., for a 50-lap, $10,000-to-win event as part of the annual Super DIRT Week activities in and around Syracuse, N.Y.