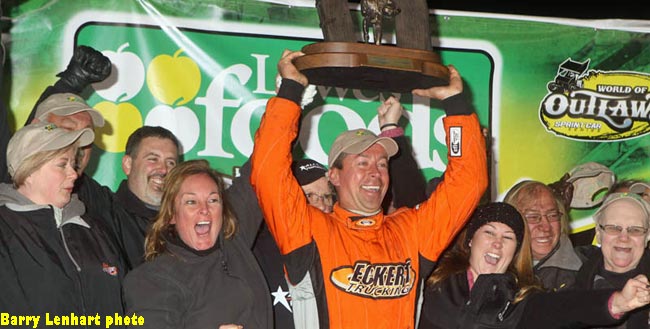 Richards’s Flat On Final Lap Propels Eckert To $100,000 Championship Celebration At The Dirt Track At Charlotte

“This is pretty amazing to be standing here again,” the 39-year-old Owens said after earning $10,275 for his first WoO LMS victory of 2011 and the fifth of his career. “We kind of have to share the spotlight, but we know that winning a championship is just awesome. It’s a real cool accomplishment – especially in front of this (capacity) crowd (of 14,000-plus) and in front of everyone watching on TV (on SPEED) – so hat’s off to Rick Eckert and all his guys.”

Eckert, 45, appeared resigned to finishing second in the national tour’s points standings until Josh Richards of Shinnston, W.Va., who entered the event trailing Eckert by just two points, slowed with a flat right-rear tire heading to the white flag. Richards, 23, was running ninth – four spots ahead of Eckert – when he fell off the pace, allowing Eckert to sail by through turns one and two and finish a very rewarding 12th.

With Richards limping to an 18th-place finish, Eckert claimed the coveted $100,000 WoO LMS championship by a 14-point margin. A series regular since the circuit was re-launched in 2004 under the World Racing Group banner, Eckert became the seventh driver to win the points crown.

“We’ve been here (on the World of Outlaws trail) since the beginning so we wanted to get (a championship),” said Eckert, whose previous best points finish was third in 2005. “It was cool to get it.”
{vimeo}31669770{/vimeo}
Securing the title certainly tested Eckert’s resolve, however. When Richards sliced Eckert’s edge to two points after Friday night’s A-Main, the veteran driver found himself on the verge of relinquishing the top spot in the standings for the first time since he assumed command with his first triumph of the season, on May 7 at Swainsboro (Ga.) Raceway.

Richards started 17th and Eckert took the green flag from 20th in the Saturday’s feature, setting up a nip-and-tuck battle for World of Outlaws glory. They ran the entire distance always in sight – and often within inches – of each other.

Eckert moved ahead of Richards at mid-pack for the first time on lap 25, two circuits after the race’s first caution flag flew for the slow car driven by Tim Fuller of Watertown, N.Y. Richards briefly fell three spots behind Eckert before tossing his father Mark’s Rocket Chassis house car to the outside of the four-tenths-mile oval and regaining the upper hand on lap 28.

When a caution flag flew on lap 37 for Steve Francis of Ashland, Ky., Richards sat 14th and Eckert was 15th – a dead-heat in the points race, though Richards held the tie-breaker with his series-leading nine wins versus Eckert’s three. They resumed their battle on the restart but later that lap were nearly swept up in a tangle between turns three and four that involved, among others, a spinning Chub Frank of Bear Lake, Pa., Shane Clanton of Fayetteville, Ga., Clint Smith of Senoia, Ga., and Tim McCreadie of Watertown, N.Y. Eckert escaped the incident unscathed on the outside while Richards pressed on despite clipping the sliding car of Union, Ky.’s Darrell Lanigan with the right-rear corner of his machine.

Richards and Eckert were 11th and 12th, respectively, for the ensuing restart, but two circuits later Richards was up to 10th and Eckert had fallen to 13th. Richards picked up another spot on lap 42 and, with Eckert wallowing in 13th, settled into a groove that seemed likely to bring him an unprecedented third championship in a row.

But as Richards slid through turns three and four with the white flag flying, his car suddenly lost speed. A flat right-rear tire was visible as he passed the start/finish line and he slowed drastically through turns one and two, leaving him unable to turn back Eckert’s surge to the championship.

It all happened so quickly for Eckert and his army of family and friends watching from the pits, stands and suites. In one lap, he went from a dejected runner-up in the standings to an overjoyed champion.

“I was pretty down because (Richards) got away from me towards the end there,” Eckert said of the race’s deciding circuit. “I killed my left-rear tire (and thus was holding on), but then I seen his car lay down – and just as I seen his car lay down, I looked at the flagman and seen it was the white flag. I was like, ‘Oh, s—. I gotta get to him.’

“I just wanted to get by him without crashing, and we did. Then I was like, ‘This is not really happening.’ I couldn’t really believe it was happening.”

Eckert was met on The Dirt Track’s homestretch by dozens of celebrating people, including his weeping wife Kristal and 22-year-old daughter Courtney; his father, Junior, and mother, who is battling cancer but was able to attend Saturday’s race because her doctors postponed a scheduled chemo treatment; and Barbara Vest, the wife of Eckert’s longtime car owner Raye Vest, who passed away during the 2009 World Finals.

“This is great,” said Eckert, who has fielded his own Team Zero by Bloomquist cars for the last two seasons. “There’s a bunch of teams on this circuit that aren’t overly funded and we’re one of them, so (winning the championship is) great for all the little guys that don’t have all that stuff.”

Richards, meanwhile, was gracious after absorbing a heartbreaking defeat. He held his head high and hailed Eckert, who served as a trusted mentor to Richards early in his career.

“I’m not disappointed at all in the year we had,” said Richards, who tied the single-season WoO LMS win record of nine set in 2004 by Scott Bloomquist of Mooresburg, Tenn. “We fought hard all year, but every time we would get close to the points, boom! – something would happen.

“Circumstances all year long put us behind and we couldn’t quite overcome it all. I feel like we had a championship year, but it just didn’t work out.

“It could not get any closer,” he added. “We lined up side-by-side on restarts, he was ahead of me, I tried to get him back. Then I was like, ‘I think I finally got him,’ and I just tried to ride it out. But we didn’t make it. We did have a gash in our tire so maybe that’s what it was, but I don’t know.”

Richards paused, and then said, “It just wasn’t meant to be our year I guess. Eckert and his guys did a great job all year. They did what they had to do and they deserved to win – congratulations to them.”

Owens has his own post-race party of the periphery of the Eckert celebration. His Lowes Foods World Finals victory topped off a memorable season in which he won the Lucas Oil Late Model Dirt Series championship and the DIRTcar UMP-sanctioned World 100 at Eldora Speedway in Rossburg, Ohio.

The race’s fourth starter, Owens made his way into the lead on lap nine when he overtook Friday-night A-Main winner Jonathan Davenport of Blairsville, Ga., who started from the pole position. Owens was nosed out for the top spot on lap 13 by Bloomquist, but he had his Mike Reece-owned Team Zero by Bloomquist car in front again the following circuit and never looked back.

Owens crossed the finish line 2.497 seconds ahead of Bloomquist, who registered his seventh top-five finish in 10 WoO LMS A-Main starts this season. Davenport settled for third in the Barry Wright house car, Steve Shaver of Vienna, W.Va., placed fourth in the K&L Rumley Rocket and Dennis Erb Jr. of Carpentersville, Ill., was fifth in a Team Zero by Bloomquist mount.

“I figured the track was gonna be a little drier tonight and we made a good tire choice for the conditions,” said Owens, a four-time DIRTcar UMP Modified national champion. “That really helped us out, but we also got down to the bottom (groove) at the right time. I could see Scott nosing under me there, so I thought, I better move down. There was some rubber down there and we were a lot better there.”

Finishing in positions 6-10 were John Blankenship of Williamson, W.Va., who ran in the top five for much of the distance; Frank, who was able to spin around and continue without stopping in the middle of the lap-37 tangle; Lanigan, who started 22nd; Earl Pearson Jr. of Jacksonville, Fla.; and Eddie Carrier Jr. of Salt Rock, W.Va., who earned the $500 ‘Bonus Bucks’ cash for being the highest-finishing driver who hasn’t won a WoO LMS A-Main and wasn’t ranked among the top 12 in the points standings.

Heat winners were Davenport, Bloomquist, Shaver, Will Vaught of Crane, Mo., Blankenship and Owens. The B-Mains were captured by Dale McDowell of Chickamauga, Ga., Eckert and Vic Coffey of Caledonia, N.Y.

The stars of the 2011 WoO LMS will be honored during the tour’s annual awards banquet on Sunday night (Nov. 6) at the Great Wolf Lodge in Concord, N.C.

For more information of the WoO LMS, visit www.worldofoutlaws.com.