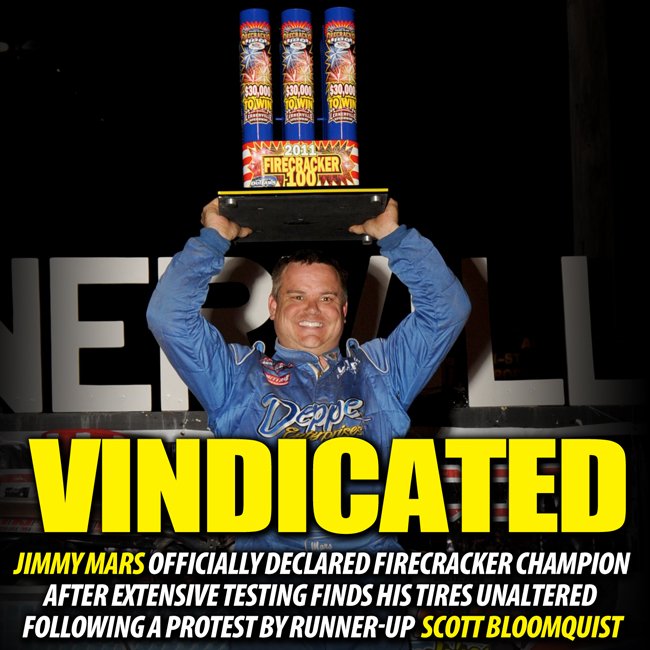 Jimmy Mars finally had his $30,000 victory in the Firecracker 100 presented by GottaRace.com at Lernerville Speedway ratified after testing of the Menomonie, Wis., driver’s protested tires revealed they had not been illegally altered, World of Outlaws Late Model Series officials announced on Wednesday.

Mars, 39, drove to his second career win in the Firecracker 100 on June 25, but he was prevented from immediately collecting the huge check for his performance because runner-up Scott Bloomquist of Mooresburg, Tenn., lodged an official protest on the right-front and left-rear tires on Mars’s car.

Both of Mars’s Hoosier tires were subjected to detailed laboratory testing for chemical enhancement that could have improved their performance in a racing application. The results of the testing, which were analyzed by an independent expert, revealed Mars had made no illegal alterations to the rubber.

Accenting the laboratory work, WoO LMS officials also obtained the services of a certified polygraph examiner to administer Mars a polygraph/lie detector test. Mars submitted to the polygraph test – similar to those given to contestants in Bassmasters tournaments and many body-building competitions – and the results further validated the lab’s findings.

“We apologize for taking so long to announce the results of Scott Bloomquist’s protest on Jimmy Mars’s tires after the Firecracker 100, but we wanted to make sure we were 100 percent accurate with the entire process,” said WoO LMS director Tim Christman. “Jimmy’s tires passed all laboratory tests for chemical alterations, but considering everything at stake with such a major event we felt it was necessary to go the extra mile and use a polygraph test on Jimmy to validate the scientific evidence with a human element. We owed it to Jimmy and Scott to make sure we got it right, and combining the two testing procedures produced a result that clearly proves Jimmy’s innocence.”