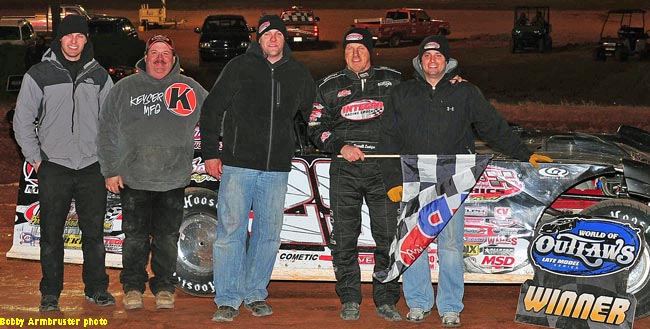 Lanigan, 40, grabbed the lead from Ray Cook of Brasstown, N.C., on lap 13 and paced all but one circuit over the remaining distance to secure a lucrative triumph worth $20,700. It was the richest race in the history of promoter Redd Griffen’s three-eighths-mile oval and Lanigan’s third $20,000-plus WoO LMS checkered flag in the last four years.

“I’m glad to come back and race the first race and not give up points this year,” said Lanigan, who was forced to sit out the ’11 lidlifter at Volusia Speedway Park in Barberville, Fla., while seeking treatment for back pain that doctors ultimately found to be caused by a fractured tailbone. “I just couldn’t ask for a better car tonight. It was just flawless…unbelievable.”

Cook, 40, settled for second place, matching his career-best finish in WoO LMS competition. He was able to nose ahead of Lanigan in lapped traffic to lead lap 45, but Lanigan slid back in front the following circuit and marched on win by 2.181 seconds.

On a night that saw fans and competitors chilled by frigid conditions (below-freezing temperatures and wind-chill factors in the teens), Lanigan, who started fourth, survived a late-race scare from Cook to register his 27th career victory on the WoO LMS. He is just one triumph from tying Steve Francis of Ashland, Ky., for second on the tour’s win list since 2004.

“We just kind of gave up the bottom there trying to get around a lapped car,” said Lanigan, whose brand-new Rocket machine lost traction momentarily exiting turn four on lap 45 as he attempted to lap Brent Dixon of Elberton, Ga. “(Cook) got on the inside of me, but our car was good enough and I drove back by him. I wasn’t gonna give up the lead that easy.”

Cook, who started second, was a gracious bridesmaid.

“He got back by me the same way I got by him – lapped traffic,” said Cook, who debuted a new MasterSbilt car. “After I got ahead of him, all I did was catch the same group that messed him up to start with.

“But he had a better car than I did. There was no doubt about that. He could leave the center of the corner harder than I could. When he’d get under lapped traffic, he could about spin out and still take off.”

Eckert, 46, was one of the race’s hardest chargers. He drove his Team Zero by Bloomquist car into third place on lap 33 and quickly pulled within striking distance of Lanigan and Cook, but he was unable to climb higher.

“I really wanted one more double-file restart,” said Eckert. “I think I could’ve got by Ray on the outside. The track got one-lane pretty good late (in the distance) when it started cleaning up, but there was a little bit on top on restarts so I would’ve liked one more shot.”

Unfortunately for Eckert, after six caution flags flew during the race’s first 28 laps, only one was needed for the remainder of the distance. That slowdown came on lap 54 when Austin Hubbard of Seaford, Del., stopped in turn four – and with less than 10 laps left, the race was restarted in single-file fashion.

Richards, 23, ran inside the top five for virtually the entire distance, but he couldn’t steer his new Rocket Chassis house car higher than fourth.

“Our car was really good, but I kept getting myself in the wrong place on the restarts,” said Richards, who started sixth. “We definitely had a car that could’ve run second to Darrell, but we didn’t take advantage of the restarts like we needed to.”

Clanton, 36, struggled in the A-Main after driving to an impressive heat-race win on Friday night.

“It was just driver error,” said Clanton, who drove a new Capital Race Car in his first WoO LMS start for the Kennedy Motorsports team. “We just went the wrong way. I needed to go back to the way I was last night.

“Sitting behind that seat, I thought I needed to change something to get faster. I did – and I slowed down even more. I thought I was O.K. until Lanigan pulled up alongside me and he could charge the corner harder than I could.”

Several contenders had strong runs ended by problems in turn four. Shannon Babb of Moweaqua, Ill., started the trend when he spun on lap three while bidding for third place. Later, Scott James of Bright, Ind., spun on lap eight after coming together with Shaver and Mike Marlar of Winfield, Tenn., who hopes to follow the WoO LMS for the first time in 2012, lost fourth place on lap 27 when he spun on the inside of the track.

A busy month of February for the WoO LMS will continue after the Winter Freeze. The tour will head farther south for the inaugural ‘Bubba Army Late Model Winter Nationals’ on Feb. 16-18 at Bubba Raceway Park in Ocala, Fla., and two dates (Feb. 23 and 25) during the UNOH DIRTcar Nationals Presented by Summit Racing Equipment at Volusia Speedway Park in Barberville, Fla.