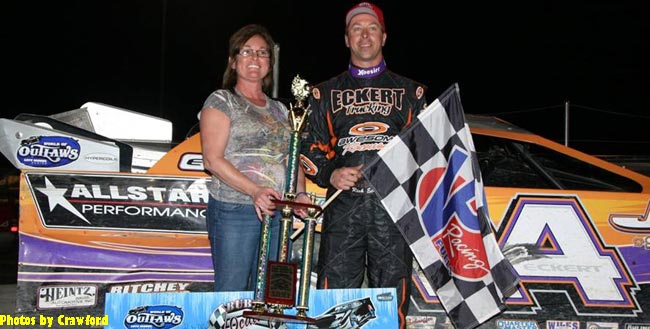 The defending World of Outlaws Late Model Series champion from York, Pa., found his rhythm in the finale of the national tour’s inaugural three-race meet at the central Florida oval. He surged into the lead on lap 44 and held on for the remainder of the distance, reaching the checkered flag first after Mike Marlar’s last-lap bid ended with the Winfield, Tenn., driver smacking the turn-three wall.

“I was saying it would take a month of me racing here before I’d win a race,” said Eckert, who ranks fourth on the WoO LMS career win list since 2004. “We struggled here for the last couple days, but we kept working and making changes and we did finally get it done.”

Eckert brought an end to the first-place stranglehold on the Winter Nationals held by Josh Richards of Shinnston, W.Va., and Darrell Lanigan of Union, Ky., who settled for finishes of second and third, respectively. Lanigan won Thursday night’s 40-lap opener over Richards and Richards beat Lanigan to the checkered flag in Friday evening’s 50-lap headliner.

Eighth-starter Shane Clanton of Fayetteville, Ga., finished fourth in Saturday night’s A-Main – his second top-five finish of the tripleheader – and 2011 WoO LMS Rookie of the Year Pat Doar of New Richmond, Wis., registered a career-best tour finish of fifth after starting from the pole position.
{vimeo}37047619{/vimeo}
Eckert started sixth in the 25-car event, but he slipped to eighth almost immediately and was still running in that position when the race’s second caution flag flew on lap 20 for the slowing Billy Moyer of Batesville, Ark. His Team Zero by Bloomquist machine came alive soon after, reaching fourth place when the next caution was needed, on lap 42 for a turn-one spin by WoO LMS rookie Greg Johnson of Bedford, Ind.

Then the race heated up. Lanigan grabbed second from Richards on the restart and nosed ahead of Marlar, who started second and had led from the initial green flag, to assume command on lap 43. Moments later, however, Lanigan’s car slid sideways in turn two and lost significant momentum, dropping him to fifth and allowing Eckert to vault into the lead at lap 44.

“They were wrestling pretty hard for the lead there, Darrell and the five car (Marlar),” said Eckert. “I think they might’ve touched (on lap 43) and they slid up the racetrack. I just stuck that bottom and got by ’em.”

After rookie Jared Hawkins of Fairmont, W.Va., spun in turn four to bring out the race’s fourth and final caution flag on lap 47, Eckert built an edge of over one second on second-place Marlar. But over the final five circuits Eckert noticeably slowed his pace and Marlar drew his Bryson Motorsports Rocket car to Eckert’s rear bumper.

On the final lap, Marlar attempted to squeeze between Eckert and the outside wall entering turn three. The space closed up, however, and contact with Eckert sent Marlar into the guardrail.

As Marlar sat against the wall, Eckert went on to win the A-Main under a yellow-checkered condition by 2.044 seconds over Richards. Marlar was able to drive his damaged car across the finish line in 18th place.

“I was like everybody – I was running out of tires,” said Eckert. “I was getting loose off (turn) two, so I’d just let my car drift out there. I drifted out there the last lap like I did every lap, and apparently Mike had a run and I got him in the wall.

“I know they’re all mad – and I’d be mad too,” he continued, speaking of Marlar and his crew. “But I surely didn’t try that. I didn’t try to crash the guy.”

Marlar, 33, was disappointed to come so close to his first-ever WoO LMS victory but gracefully accepted his fate.

“(Eckert) didn’t give me room, but it is hard to see out of these cars,” said Marlar, who hopes to follow the WoO LMS for the first time in 2012. “I’m not gonna say he wrecked me or, ‘He did this,’ or, ‘He did that.’ I definitely knew the chances (of trying an outside pass), and I took them. Our team’s strong and we got good equipment, so I just went for it – and unfortunately, I got bit.

“But we come to win. We have that win hunger, and when it comes to situations like that I guess we’re just gonna tear up some stuff because we’re not backing off.”

Marlar looked wistfully at the lap-42 restart when he lost the lead.

“It’s my fault I got passed,” said Marlar. “I kept pulling the front wheels of the ground scooting through the corner on those restarts. I had done it two or three times, and I was trying my best for that not to happen (on lap 42) so I went in and stood on it with all I could so it wouldn’t. But that made it even worse, and when I pushed it cost us the lead.”

Richards, 23, was in the middle of all the late-race action.

“It got crazy fast with everybody running so close together,” said Richards, who started third. “Everybody was going for the win.

“We had a great all night, but we weren’t quite set up for that (track) condition when it slowed down. I was pretty much holding on at the end.”

Lanigan, 41, saw an opportunity for his third win in four WoO LMS events this season slip through his fingers.

“We got the lead there for a second, but I don’t know if we got loosened up or just got too loose getting in there and somebody got in the back of me,” said Lanigan. “We got it corrected and come back out in fifth, so to get third – I guess that’s not too bad.”

Lanigan was quickest in Ohlins Shocks Time Trials, topping the 49-car field with a lap of 13.998 seconds. It was his third fast-time honor of the young season.

All of the A-Main starters posed for a photo during the pre-race introductions with professional wrestling legend Hulk Hogan, who served as the Grand Marshall of the event. He is a close friend of BRP owner Bubba ‘The Love Sponge’ Clem, a nationally-syndicated radio show host.