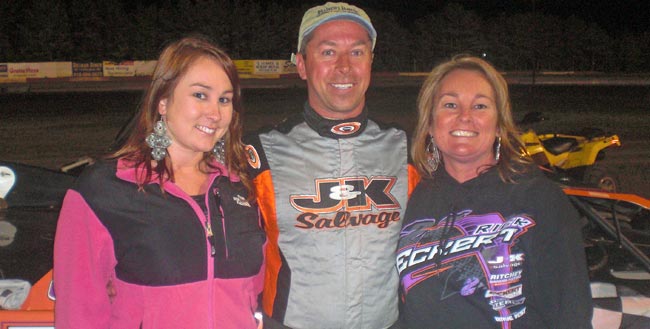 Recapturing some of the magic of his career-best season on the World of Outlaws Late Model Series, Eckert stormed to his second win in the last three tour events, capturing Thursday night’s ‘Fulton Bank 50’ at Delaware International Speedway.

Eckert, 45, of York, Pa., dominated the race, rolling off the outside pole starting spot to lead the entire distance. He was never seriously challenged en route to his 23rd career WoO LMS victory, tying him for third on the win list since 2004 with Darrell Lanigan of Union, Ky., who finished 1.945 seconds behind Eckert in second place.

Tim McCreadie of Watertown, N.Y., finished third, giving him a season-best outing on the series. Two-time defending WoO LMS champion Josh Richards of Shinnston, W.Va., placed fourth after running in second for nearly half the distance and Jason Covert of York Haven, Pa., marched forward from the 15th starting spot to take fifth.

The $10,625 triumph helped Eckert pad his WoO LMS points lead, which he ascended to last week for the first time since his spectacular 2006 campaign. He won eight of the first 17 races contested that season.

“I don’t know if we’re all the way back to that level yet,” Eckert said of his ’06 performance, “but we’re getting better and better. We’ve made some changes to our car that it’s really responded to.”
{vimeo}23674635{/vimeo}
Driving his self-owned Team Zero by Bloomquist machine, Eckert outgunned pole sitter Tim Fuller of Watertown, N.Y., for the lead at the initial green flag of the Fulton Bank 50 and never looked back. His run to the big check was assisted by two caution flags that flew at just the right time during the race’s second half.

“Traffic was treacherous,” Eckert said of the slower cars he had to deal at mid-race and again with the checkered flag nearing. “I guess (Lanigan) was catching me there (with less than 10 laps remaining) when I got held up by some traffic, (so) I was liking when the caution would come out and get us a little air in front of us.

“When you get behind lapped cars you get a little bit freer, so after the cautions (on laps 27 and 44) gave us clear track I could get out there and use a little more of the racetrack. I didn’t have to pin myself down behind anybody.

“We made some big strides tonight,” added Eckert, who ended the night with a 28-point edge over Richards in the WoO LMS standings. “Our car wasn’t very good when we unloaded, but we kept knocking away at it and during the race we had a really good car.”

Eckert had the opportunity to celebrate his victory with a large contingent of family and friends, including his wife Kristal and daughter Courtney, both of whom missed Eckert’s WoO LMS win on May 7 at Swainsboro (Ga.) Raceway because Courtney graduated from Millersville (Pa.) Speedway that same day. Eckert’s mother and father also attended Thursday’s program and joined their son for the post-race photos.

Lanigan, 40, was only able to draw within striking distance of Eckert at the end of the green-flag stretch from lap 27 to 44. But just as it appeared Lanigan, who started sixth and slipped by Richards for second on the lap-27 restart, would mount a challenge, the race’s fourth and final caution flag flew with six laps remaining for the steaming car driven by Dale Lingo IV of Millsboro, Del.

“Our car was better there in traffic and Rick was better in open track,” said Lanigan, who registered his series-leading seventh top-five finish this season. “Rick had a good car tonight and we just wound up second.”

McCreadie, 37, enjoyed a confidence-building third-place finish in his first start behind the wheel of the Sweeteners Plus team’s 2008 Victory Circle car. The machine still sported his teammate Vic Coffey’s colors and No. 32c.

“I think for pulling a car out of mothballs that was just sitting on jackstands since ’08, it was pretty good,” said McCreadie, who started ninth and needed 27 laps to climb up to third. “I think I might have hurt a motor a little bit at the end because it got hot, but I can’t remember what the top-three (finish) feels like so I’m happy.

“This car was comfortable to drive. We gotta work on it, but after driving up to third from where we started, I think we’re making strides.”

Richards, who won last year’s WoO LMS A-Main at the half-mile Delaware oval, fell from second to fourth when he slipped over the turn-two cushion on the lap-27 restart. He never recovered and remained uncharacteristically winless through 10 events on this year’s tour.

Fuller faded out of the top five during the race’s second half but still recorded a season-high finish of sixth. Caledonia, N.Y.’s Coffey started eighth and finished seventh; Jeremy Miller of Gettysburg, Pa., placed eighth; Dan Stone of Thompson, Pa., was ninth in his first start driving for the Leo Milus-owned team that won a WoO LMS event last year with Ricky Elliott of Seaford, Del., behind the wheel; and Clint Smith of Senoia, Ga., round out the top 10 after starting third.

Teenage WoO LMS sensation Austin Hubbard, who lives in nearby Seaford, Del., experienced a frustrating evening in front of his local supporters. He made a sterling charge from the 17th starting spot to eighth place by lap 27, but during a caution period that circuit he pitted to change a left-front tire that was cut by a broken body brace. The tour’s 2010 Rookie of the Year pitted again on lap 44 but salvaged an 11th-place finish.

A field numbering 38 cars participated in the event, which brought the WoO LMS to DIS for the fifth consecutive season and seventh time in the last eight years. The crowd was the biggest to ever see a full-fender World of Outlaws show at the track.

Heat winners were Coffey, Clint Smith, Brent Robinson of Smithfield, Va., and Miller. The B-Mains were captured by Hubbard and Ricky Elliott of Seaford, Del.

The occasion of Robinson’s first-ever WoO LMS heat-race victory was tempered by the fact that his car’s engine overheated during the prelim due to a broken radiator bracket that created a hole in the radiator. He was unable to use his fifth starting spot for the A-Main.

The WoO LMS will swing back into action on Saturday night (May 14) with the running of the Gunter’s Honey Spring 50 at Winchester (Va.) Speedway. A $10,000 top prize will be on the line in the one-third-mile track’s inaugural tour event.

2011 World of Outlaws Late Model Series Point Standings as of May 12 – 10 A-Mains completed (rank/driver/points/deficit to leader):