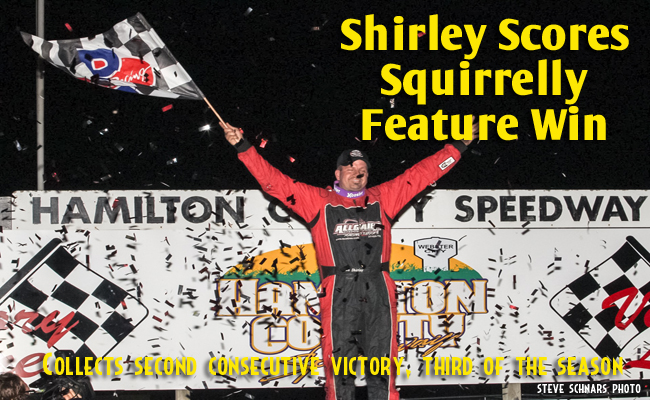 WEBSTER CITY, Iowa – July 7, 2016 – Brian Shirley was triumphant in a Thursday night thriller, winning the World of Outlaws Craftsman® Late Model Series race at Hamilton County Speedway. This is Shirley’s second consecutive win, both coming almost within a week of one another.

“It was just one of those deals when you had a great car, there were a couple different options out there,” Shirley said. “Everybody was good. We decided to change a couple things and it worked right. All in all, I’m just happy.”

Shirley’s win did not come easy. From the start Jimmy Mars, who currently ranks 16th all-time in career wins with the Outlaws, muscled his No. 28m Deppe Enterprises/ S&S Transport, Inc. M.B. Customs car to the front. Mars took the lead on the first lap, leaving the rest of the pack to sort themselves out while he opened up a comfortable half-second cushion.

Two cautions occurred on lap 7 and during each of them, Brandon Overton and Rick Eckert traded paint for second position. Overton slammed the door on Eckert for the first restart, but Eckert managed to overtake him with the same move on the next restart in turn one. While they both lost momentum from their battle, 2013 Rookie of the Year Eric Wells stormed down the front straightaway into third place uncontested. Wells started ninth in the feature.

Shirley followed Wells up to the front from seventh to one position shy of the podium; they both passed Eckert following a caution with 25 remaining. From there, Wells and Shirley had he barnburner of their own. Wells’ No. 18 Allstar Performance/ Penske Racing Shocks Longhorn car skated through the top-half of the track while Shirley mowed the infield lawn with nose of his No. 3s Bob Cullen Racing/ Arnie Ranta Motorsports Longhorn machine.

Shirley began the tango between him and Wells when he passed him with 23 to go. But Shirley was not off the hook that easily. Wells reclaimed the second spot two laps after. The duo maintained a .100-second margin between each other when they weren’t swapping positions every-other lap.

It took a bold move from Shirley on lap 33 in turn three to catapult him into first. Wells needed two more laps thereafter to make his move for first. Though Mars could not fend-off Shirley, he was able to put the block on Wells’ pursuit after a lap 34 restart. Shirley opened-up his lead to more than one-second while Wells ran out of time to pass Mars.

“This is probably the best I’ve been all year,” said Wells, beaming ear-to-ear. “That was fun. The car was very maneuverable and could run anywhere on the track. I honestly did not expect that. Thanks to Brian and Jimmy for racing me clean. We put on a great show for these fans.”

Mars led 33 of the 40 laps in his first World of Outlaws appearance of the season. His last series win came on July 31, 2014 at Cedar Lake Speedway (Wisc.).

“Congratulations to Brian, he drove a good race,” Mars said. “I was kind of committed more to the top and it gotta a little dirty up there later in the race. But we’ll take it. It’s always fun running with the World of Outlaws when we get the chance.”