Richards Wins No. 13 at Cedar Lake 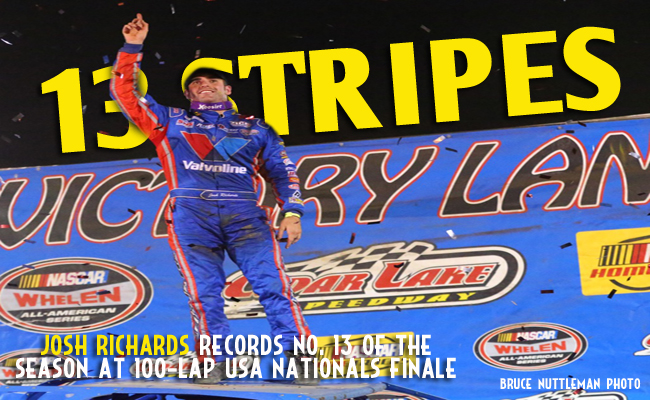 Richards Wins No. 13 at Cedar Lake

NEW RICHMOND, Wisc. – August 6, 2016 – Josh Richards won his second career USA Nationals finale Saturday night at Cedar Lake Speedway.  The victory marked his 20th of the season (13th in the series) and 71st of his career in the World of Outlaws Craftsman® Late Model Series – one win from tying for the all-time series record.

“I don’t know what to say…I’m speechless,” said Richards, winning the $50,000 purse. “I can’t thank everyone enough for coming out. This car has been so fun to drive. This is awesome.”

The caution-filled night began with the 100-lap feature’s first on lap 10. Jonathan Davenport, who started runner-up to Shane Clanton, suffered a flat right rear tire. It seemed “Superman” had found his Kryptonite, as he veered-off into the pits. The other 30 cars moved-up for the restart; Richards and Mason Zeigler shared the podium with Clanton.

On the restart Clanton and Richards separated from the rest of the field. Zeigler and Eric Wells paired-up and dueled for the third spot. Wells was the weekend’s fast time winner, a first for him since his rookie year in 2013. He continued his hot streak; however, Zeigler briefly extinguished his chances of passing him.

Zeigler moved to Richards, sweeping the nose of his bumper through the backside of his No. 1 Valvoline/ Seubert Calf Ranches Rocket racecar. A three-wide battle between Clanton, Richards and Zeigler had the packed crowd on their feet for half of lap 12. Zeigler managed to get by Richards in turn four before another caution flag waved.

On the race’s third restart – one lap later – Richards reclaimed the second spot from the top of the cushion. Richards closed the gap between him and Clanton to as little as 0.455 seconds, but could not capitalize.

Zeigler could not take advantage of starting third in the feature, when mechanical issues ended his night early on lap 18. Dennis Erb. Jr. took his place in third spot momentarily until mechanical issue scrapped his chances seven laps later. Wells replaced the crippled cars in the third position; he went on to challenge Clanton on the restart, side-stepping Richards who took the outside.

Within two more cautions both Richards and Wells challenged Clanton for the top spot, staying within a second of him. Though Clanton blocked Richards’ inside attempt entering turn one, it only took two more turns for him swoop into the lead on lap 31. Richards diminished Clanton’s 0.8-second lead to 0.088 seconds in that sequence.

As for “Easy E” and his pursuit, it seemed to be the opposite. Through a series of cautions, Wells took to the lowest groove of the track with his No. 18 Allstar Performance/ Penske Racing Shocks Longhorn machine. At turn two of each of the three following cautions, Wells cut the corner. Though he compromised momentum exiting the corner – while Clanton built momentum on the top cushion – he ended up making the pass with 35 laps remaining. Clanton finished seventh on the night.

At first, Davenport seemed to be taken out of contention in the feature with his early troubles. But, throughout the race, he gained ground. By the halfway point, Davenport was back into the top 10. By the time Wells made the pass into second place, Davenport’s No. 6 Baird Transport/ Elite Concrete Longhorn car had him in his sights.

By this time, Davenport maintained a 0.45-second margin between him and Wells, biding his time. Davenport sailed on the top cushion, wildly flirting with the outside walls of each of the turns – at times kissing them with his right rear fender.

“We were reeling them in,” said Davenport, who charged hard from the back of the pack. “I thought, ‘Here we go, we have a shot.’ All I had to rely on was the cushion, and I was rolling on it decently.”

With 20 laps remaining, Davenport took his shot at Wells. In turn four, he was able to pass Wells for second place. Richards increased his lead to a tick shy of two and a half seconds. Davenport began to close the gap slightly, but it was not until the race’s final caution when he saw his chance.  With 9 laps remaining, Richards and Davenport had a shootout for the lead.

Richards stayed low on the track while Davenport stuck with his bread-and-butter up-top. A strong restart from Richards reopened more than a two-second gap, and the final dagger was when Davenport clipped the turn two wall. Davenport held his ground for second place even so, with Wells rounding out the podium.

Wells finished the weekend recording his first fast time and fourth top five finish in 29 feature events this season. Wells said he stuck with the same setup all weekend, which proved to suit the track well.

“It was really good, and we got to stay out of trouble,” said Wells, who felt he was strongest in the middle of the track. “I saw Davenport coming up on me from the scoreboard and where he was, and it was fine by me. We stuck to the middle. We came home with third, but it felt good.”

Richards picked up his 13th win of the season, the same number of wins World of Outlaws Craftsman® Sprint Car Series points leader Donny Schatz had after the series made its stop at Cedar Lake Speedway in July.