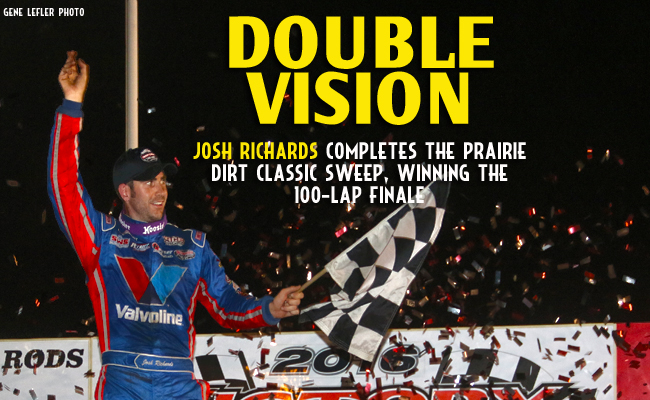 Dennis Erb Jr. rekindles a past battle between the two late

FAIRBURY, Ill. – July 30, 2016 – Josh Richards completed the “Prairie Dirt Classic” sweep Saturday night in front of a packed house, winning the 100-lap finale at Fairbury American Legion Speedway. The victory was Richards’ 11th of the season and his 69th of his career in the series.

“To win this race at Fairbury, it’s one I’ve always looked forward to,” Richards said. “It’s cool to finally get one.”

Richards, starting 11th in the feature, worked his way to the top gradually. While he was in the pursuit of the podium, race leader Steve Casebolt – who led the field into the green flag – established himself on the top cushion of the 1/4-mile oval.

In the opening laps, Casebolt extended his lead to nearly four seconds, while the trio of drivers behind him spanned three-wide among the width of the track. On lap 15, Casebolt broke into lapped traffic – using the nose of his car to wedge himself through the field. Don O’Neal capitalized on the three-way battle, side-skirting the completion into second position. O’Neal used the bottom of the track for the majority of the race.

Tim McCreadie, who was one of the players in the three-car shootout, was able to break away from the other two. He challenged O’Neal for the runner-up spot. O’Neal had nothing for McCreadie, losing the battle. All the while, Richards gained enough momentum to challenge a fading O’Neal for the third spot; Richards eventually won the battle. Back-to-back cautions not only instantly diminished Casebolt’s 3.664-second lead, but his car experienced mechanical problems prompting the second caution. It took him out of contention as he could not finish the race.

Richards used the top groove as his route to the top, though in the process his No. 1 Valvoline/ Seubert Calf Ranches Rocket car suffered some minor left-rear body damage. Illinois-native Bobby Pierce followed suit, riding the cushion with Richards. The nose of Pierce’s car ended up pitching the car airborne, causing another caution to regroup the field.

On the restart, Richards secured the top of the track, and McCreadie and O’Neal soon revisited their battle below him. Shane Clanton and his No. 25 Weldbank Energy/ Coopers Meat Packers Capital car entered the battle three laps into the halfway point of the race. Again, a three-way battle was to determine who would take second position. The battle lasted nearly 10 laps, but Clanton came out on top.

Following the battle, McCreadie fell back into fourth position with Dennis Erb Jr.’s No. 28E J.R. McBride Leasing/ McBride Mack Black Diamond nipping at his heels. With 40 laps remaining, Erb overtook McCreadie for third position; O’Neal lost enough momentum battling Richards, which left the door open for Erb and Clanton to pass him from both sides of the track. Erb was next to challenge Richards following the race’s final caution with 26 laps remaining, but he came up short.

“We just had one heck of a race at the end,” Erb said. “I have a lot of respect for [Josh] and these other guys out here. We all wanted to race hard, and we all want to win. But we have to go out there and respect each other, too. It could have went either way. We’re just happy to come home with second.”

Richards relived a similar fight for first from earlier this season at “The Dream.” Erb ended up passing Richards that night, winning the event. Richards evened-up the score at Fairbury.

“I’ll tell you, [Dennis] is one of the best guys in the country with these long races,” Richards said. “He paced himself around the bottom and I saw him a couple of times. The top was good early, and when you’re leading you’re sometimes a sitting duck. This track had not one preferred groove.”

Though Richards did not build a comfort zone between Erb and Clanton for the next 30 laps, the closest the two ever got to him was 0.498 of a second. Erb and Clanton battled briefly for the second spot, but Erb was able to keep Clanton at bay. From there, the podium did not change.

“The outside was treacherous,” said Clanton, who could not overtake Erb in the final laps. “It was overall a good weekend. Hopefully we can keep running consistent top five finishes, and the wins will take care of themselves.”

Jonathan Davenport, who won the non-qualifier, opted to forfeit the $2,000 purse to be added to the 100-lap feature. Dvenport finished 28th.